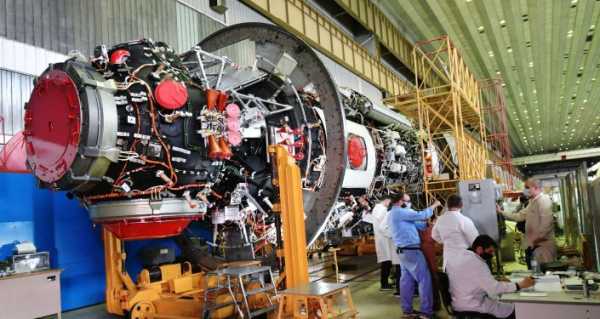 On Thursday, Russia’s Energia Corporation, tasked with managing Russian modules aboard the International Space Station, proposed the creation of a new, national orbital space station, to be deployed sometime after the year 2024.

Russia’s next orbital space station may be deployed at an orbit that will allow it to keep an eye on the entire surface of the Earth, and the Arctic region in particular. That’s according to an Energia Rocket and Space Corporation document submitted to the Russian Academy of Sciences’ Space Council seen by Sputnik.

According to the company, two orbital inclinations – 72 and 98 degrees, have been proposed for the new station, with the latter suggested for the first time ever.

Dr. Andrei Ionin, a member of the Tsiolkovsky Russian Academy of Cosmonautics, and senior expert on Russia’s GPS equivalent, GLONASS, says an inclination of 98 degrees could assist in the monitoring of northern territories, although less expensive Russian satellites weighing 15 kg apiece are also capable of doing the same job.

Russia has contributed vast economic and military resources in recent years to shoring up its presence in the Arctic in an effort to turn its northern territories into a major driver for economic growth, both through the exploration of the region’s vast untapped natural resources, and the creation of a new major transport route to ease trade between Europe and Asia.

Map of the Arctic region showing the Northeast Passage, the Northern Sea Route and Northwest Passage

Energia Corporation has been lobbying for the creation of a new, autonomous Russian space station for years. On Thursday, at a meeting chaired by Russian Academy of Sciences President Alexander Sergeev, Vladimir Soloviev, Energia’s deputy director-general, indicated that Russia needs to consider creating a new national space station because the International Space Station’s systems are beginning to show their age. Soloviev later also clarified that Russia has no plans to give up on the ISS or end its existing partnerships with other space-faring nations.

The new proposed Russian space station is expected to have between three and seven modules, and to host crews of between two to four people. It is expected to be deployed at some point after 2024, although no exact time frames have been set thus far.

In October, Soloviev indicated that the new Russian station would be similar in design to the Mir, a Soviet space station design which operated between 1986 and 2001, and which in many ways served as a precursor to the ISS.

Space station Mir in orbit above the Earth

According to the senior Russian space industry official, the station could include a commercial module for accommodating four space tourists, with the module including two large portholes and Wi-Fi access. Additionally, engineers plan to make it possible to regularly dock the station to a free-flying lab module.

At present, it’s planned to launch the station’s modules using the new Angara-A5 heavy lift launch vehicle, which is capable of launching at least 24.5 tonnes of useful cargo into orbit. Earlier this year, Energia proposed using the Angara-A5 as an inexpensive means to send Russian cosmonauts to the Moon and back without the need to develop a new super-heavy lift rocket.