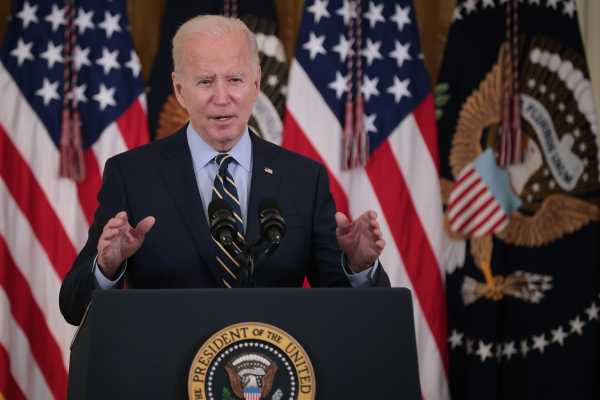 The price of consumer goods rose by 6.8 percent over the past year, the Bureau of Labor Statistics reported on Friday, the biggest increase since the 1980s. “Essentially across the board,” as Vox’s Rani Molla and Emily Stewart write, everyday purchases from food to gas are costing more, and it’s going to be an expensive holiday season.

That part isn’t in debate. What is, however, is how worried everyone should be. In Washington, there’s sharp disagreement about what exactly is responsible for surging inflation and what the government can — or should — do about it.

Some of the causes are fairly self-evident: Entering the third year of the Covid-19 pandemic, the US — and much of the rest of the world — is grappling with a supply chain crisis. That means most goods, from game consoles to oranges, are more difficult to get to store shelves for one reason or another, whether it’s a lack of critical tech components or a backup at ports due to labor shortages. US consumers, however, simply haven’t stopped buying, and that demand-supply disjunction has caused record inflation.

Some economists, as well as President Joe Biden, take the view that the pandemic — and the pandemic-snarled supply chain — are the primary culprits, and inflation will ease as the US keeps combating the pandemic and implements supply-chain fixes. On Friday, according to CNN’s Kaitlan Collins, Biden told reporters that “the reason for inflation is that we have a supply chain problem that is really severe.”

Others, though, are concerned the problem is bigger than that. Former Treasury Secretary Larry Summers, for example, has also pointed to government spending as a reason for increased inflation, and believes it’s far from a bump in the road.

The Biden administration is projecting optimism on inflation

The optimistic case for current inflation goes something like this: Though supply chain problems have led to a shortage in many consumer goods, Americans haven’t stopped buying — and with more money in their pockets, they have the capacity to do so.

Specifically, lockdowns and being stuck at home — unable to travel or go to restaurants, bars, and live events — have shifted what Americans are spending their money on. Less money spent on travel or experiences, combined with stimulus funds, has driven many Americans to buy more consumer goods. That, combined with supply chain problems decades in the making, has led to the current, precipitous rise in inflation.

As vaccines make a return to normal life more possible, however, American spending habits are likely to begin to return to normal, which could also have an impact on inflation. Biden painted a relatively optimistic picture Friday, telling reporters he believes inflation has reached its peak.

“I think you’ll see it change sooner, quicker, more rapidly than people think,” Biden said. “Every other aspect of the economy is racing ahead.”

Surging inflation doesn’t mean bad economic news across the board, either. As Claudia Sahm, a former Federal Reserve economist and senior fellow at the Jain Family Institute, told Vox in November:

Still, while inflation numbers aren’t the only measure of economic health, the reality is that inflation is high after decades of hovering around 2 percent. That, as Sahm said, is a “pain point” as the economy recovers from the Covid-19 pandemic, and it’s one that people notice because they interact with every day at the gas pump and the grocery store. But while the current numbers are higher than Fed targets, it’s nowhere near the level seen during the so-called Great Inflation, when consumer prices shot up more than 14 percent.

Some worry Biden’s not doing enough to fight inflation

Nevertheless, some influential voices, including Summers, have raised the alarm about long-term inflation problems and pointed to government spending as a driver of inflationary woes.

In a February Washington Post op-ed, Summers wrote that “there is a chance that macroeconomic stimulus on a scale closer to World War II levels than normal recession levels will set off inflationary pressures of a kind we have not seen in a generation, with consequences for the value of the dollar and financial stability.”

In the same piece, Summers accused the administration of denying “even the possibility of inflation,” raising concerns that Biden wasn’t adequately prepared for the rise in prices that coincided with sweeping stimulus packages, and didn’t have the proper measures in place to act quickly to bring inflation down.

That concern — that the administration wouldn’t act quickly and that inflation would become a longer-term problem, rather than the transitory issue Biden predicted — is playing out, at least somewhat. So far, as November’s numbers show, inflation isn’t letting up.

While the US has spent trillions in pandemic relief, however, inflation is also occurring elsewhere in the world, where governments have taken different approaches to dealing with the fallout from the pandemic — suggesting that government spending doesn’t tell the whole story.

What is the government doing to contain inflation? What can it do?

While the Biden administration is doing what it can to fix supply chain issues and drive down rising gas prices, most of tools to address inflation are in the hands of the Federal Reserve.

“I don’t think [inflation] is changing very much any time soon,” Jason Furman, the former chair of the White House Council of Economic Advisers, told MSNBC Friday. “I don’t think there’s a whole lot the White House can do about it, but for the Federal Reserve, a better economy and higher inflation both tell them they need to continue to pivot to get this under control.”

One way the Fed plans to cool the economy is “tapering” — gradually decreasing the $120 billion it spends per month on government-backed bonds, which has injected money into the financial markets during the pandemic. In November, Fed Chair Jerome Powell announced the central bank would reduce that amount by $15 billion each month. The purchasing program is supposed to end halfway through 2022, but as the New York Times reported in early December, that program could finish more quickly as the Fed attempts to reduce inflation.

“At this point, the economy is very strong, and inflationary pressures are high,” Powell said in late November. “It is therefore appropriate in my view to consider wrapping up the taper of our asset purchases, which we actually announced at our November meeting, perhaps a few months sooner.”

Along with that could also come interest rate hikes, although the Fed has not announced specific plans to do so. Interest rate increases are a powerful tool in the Fed’s arsenal to slow down consumer spending, and thus inflation. And, as inflation continues to rise, that’s looking like a more likely tack for Powell to take, once the Fed’s satisfied that the economy has reached “maximum employment” — a signal that the economy is healthy enough to withstand the withdrawal of government support.

Summers, though, sounded the alarm to Bloomberg on Friday, saying that the Fed would also need to increase interest rates — the amount that a lender charges a borrower for a loan or credit — repeatedly next year to help keep inflation in check.

“We’ve put in motion, for the first time in 40 years, excessive inflation caused by overheating of the economy,” he said, warning that the government had driven up inflation “way above 2 percent — perhaps in the 4 percent or even higher range,” and that could be permanent.

Beyond monetary policy, though, the other massive piece of the puzzle is the supply chain — and that’s something politicians and policymakers have much less control over. Biden has attempted to ease supply chain woes by running the Port of Los Angeles 24 hours a day, clearing the docks so goods don’t wait for days on cargo ships stranded in the water. And the release of 50 million barrels of oil from the US Strategic Petroleum Reserve last month was geared toward reducing gas prices, which have already begun to fall.

Most likely, however, the supply chain will remain snarled for the foreseeable future — keeping inflation higher than we’re used to — and policymakers will have to react to that reality.

We need to wear better masks

Two ways to read Manchin’s “no” on Build Back Better