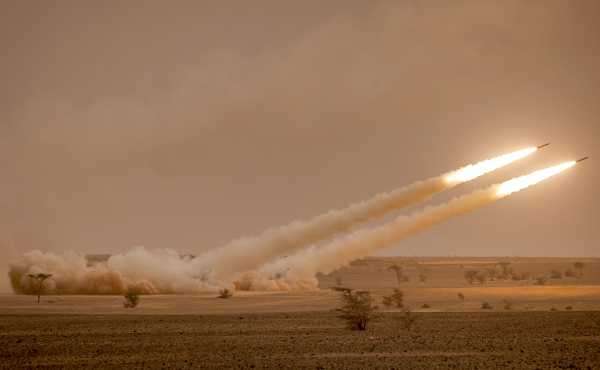 On Tuesday, as Russia’s invasion of Ukraine reached its 100-day mark, the United States government announced that it would send powerful new artillery systems to Ukrainian troops fighting in the country’s southeastern and eastern fronts, as well as radar systems and a number of additional weapons as the war condenses into a brutal slog to push Russia out of the Donbas and surrounding areas.

The four M142 HIMARS, high mobility artillery rocket systems, and associated ammunition, in this case the Unitary guided multiple launch rocket system or GMLRS, will supplement the shorter-range howitzers that the US, France, Britain, and Germany have sent to Ukraine in recent months and allow the Ukrainian armed forces to better keep the Russian military at a distance.

President Biden announced the new weapons and aid package in a New York Times guest essay, saying that the US would send “more advanced rocket systems and munitions that will enable them to more precisely strike key targets on the battlefield in Ukraine,” without mentioning specifically which weapons would be deployed. In a June 1 press conference, Undersecretary of Defense for Policy Colin Kahl announced that the HIMARS, which can hit targets in the range of over 70 kilometers away, were included in the package, as well as five counter-surveillance radars and two air surveillance radars.

Russian officials, for their part, have claimed that the new weapons package represents a provocation from the west. “We believe that the United States is deliberately and diligently ‘pouring fuel on the fire,’” Kremlin spokesperson Dmitry Peskov said Wednesday, claiming that, “Such deliveries do not contribute to … the Ukrainian leadership’s willingness to resume peace talks,” according to the Washington Post.

The HIMARS have been at the top of Ukraine’s wish list, even more so than the fighter jets they were calling for in the beginning of the war. That’s because, as Rita Konaev, deputy director of analysis at Georgetown University’s Center for Security and Emerging Technology, told Vox, the battlefield has changed dramatically as Russia shifted and reorganized its assets to fight in the Donbas region. That means a move away from urban environments, where poor planning on Russia’s part weakened its offensive, and Ukrainian troops familiar with the territory had the advantage.

“It’s increasingly clear that no one side is winning the war,” Konaev said. As opposed to the fast-moving initial weeks of the invasion, when outsiders thrilled to the idea of the scrappy Ukrainian forces dealing blow after surprising blow to the bigger, better-kitted Russian forces. But the fight for the Donbas has become “a war of a mile a day,” she said, a back-and-forth battle over territory more like World War I than the fast-paced campaigns of February and March.

“That phase of the war is over,” Konaev said. “This phase is more grinding, piecemeal.” Because of the radical shift in the nature of the battlefield, the weapons on offer have to change dramatically, too.

“I think the impetus for sending the HIMARS is twofold,” she told Vox. First, she said, the new weapons systems provide “greater standoff capabilities” — the ability to keep battlefield distance between two forces — about double that of the howitzer. Second, HIMARS represent “a massive upgrade in firepower,” she told Vox, adding that when used strategically, the “impact is similar to airstrike lethality.”

The Russian military has its own MLRS, but as John Spencer, the chair of urban warfare studies with the Madison Policy Forum and author of Connected Soldiers told Vox, “our weapons are farther reaching, more accurate” than the Soviet-designed systems.

But as of now — without the advanced weapons systems the US has promised Ukraine — Russia has some clear battlefield advantages, Konaev said.

“It’s not that Russia has gotten better,” she said, “it’s just a concentrated force [in an area] more amiable to Russian strengths.” Because the fighting is much closer to Russia’s territory, “there are shorter supply lines, and limited airstrikes used more effectively — they can run these quick ops and head back to base,” with a lower-risk, higher-reward calculus.

“In Donbas, the battles are happening at greater distances,” Spencer explained. Right now, Ukrainian troops “are really hampered in terms of range,” he told Vox. “If you know where a target is, you have to be able to reach it.” In other words, Ukraine may have the intelligence about where a crucial Russian target is, but a howitzer just can’t get there without putting Ukrainian troops at increased risk.

“At this moment in the war, this makes the most sense,” Spencer said of sending the HIMARS.

Here’s how the HIMARS could help shift Ukraine’s advantage

However, the new systems aren’t immediately going to win the war for Ukraine. “I don’t think these [HIMARS] will provide overnight change,” Spencer told Vox, but once they get on the battlefield, the four systems could help Ukrainian troops “regain momentum,” he said. Konaev agreed, telling Vox, “we won’t see the impact for at least another month.”

Although the Pentagon would not disclose whether the systems had yet been delivered to Ukraine, citing “operational security reasons,” Pentagon spokesperson Marine Corps Lt. Col. Anton Semelroth confirmed that, “We did pre-position the HIMARS systems in Europe to ensure that they can be rapidly delivered.”

After the weapons do make it to Ukrainian troops, it will take around three weeks for them to be trained on the systems, before they’re put to use on the battlefield against Russian forces. On Friday, it appeared that moment couldn’t come quickly enough, as Russian Defense Minister Sergei Shoigu threatened to “accelerate” Russia’s “special military operation,” in a meeting with Head of the Chechen Republic Ramzan Kadyrov. According to a briefing from the Institute for the Study of War, Shoigu didn’t provide specifics but in their assessment, Russian forces will likely be unable to launch more advanced operations given the enormous investment in equipment and troops it would take.

However, Ukrainian losses are piling up, with between 60 and 100 soldiers dying each day, President Volodymyr Zelenskyy said in a speech this past week. And Russia has ramped up its scorched-earth tactics in the Donbas, pummeling cities like Severodonetsk — preventing evacuations and resupply, in a nightmarish repeat of its siege of Mariupol.

“The Russian massing of fighters [in the Donbas has] turned momentum briefly,” Spencer told Vox, although he predicted that getting the HIMARS onto the battlefield “will result in more dead Russian generals” — translating to an ever-more disorganized Russian fighting force. “The path to victory is unraveling.”

Both Spencer and Konaev told Vox that intelligence on the Ukrainian side will play a decisive role in any gains in territory or defeat of Russian forces, as it has so far in the war. “The most important impact has been intel,” Konaev said, giving Ukrainian forces “the ability to protect themselves, and pre-empt attacks on supply lines.” Radar systems will augment that intelligence, with air surveillance radars and HIMARS disrupting Russia’s ability to command air dominance.

But right now, mitigating shelling from the Russian side could have a much greater impact on the battlefield — and on the safety of civilians. “Russian artillery has caused the greatest damage,” Konaev explained, leveling cities like Maruiopul and Severodonetsk, and the combination of the counter-artillery radars and the mobile, longer-range weapons will hopefully prevent Russia from “ruling the rubble,” as Spencer put it — claiming victory by subduing and destroying population centers.

Biden’s op-ed reiterated his position throughout the war — that the US and NATO are not seeking a war with Russia, and that the US will continue arming Ukraine because it’s the right thing to do, but it’s still not quite clear, at least from the op-ed, how far that will go. Considering just how grueling and grinding the war is now, the field seems open in terms of additional weapons the US will supply, which, as Kahl pointed out in his Wednesday press conference, could include more HIMARS.

Whatever additional resources are on the way, the summer will likely be just as grinding, bloody, and devastating as the past few weeks have been, as a recent Politico feature acknowledges. Even if Ukraine is able to turn on the offense and begin retaking land, it will be slowly — piecemeal, position by position and village by village, said Serhiy Haidai, the head of the military government in Luhansk, one of the regions that makes up the Donbas. Until then, Russian forces are raining down artillery and making incremental advances; as Haidai said to Politico, “they are destroying everything and then moving through the ruins.”