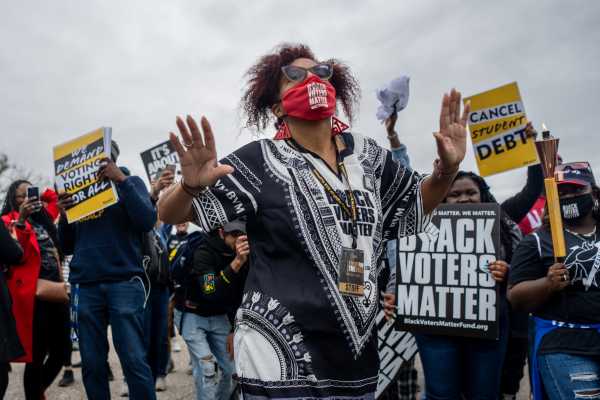 Grassroots groups have helped turn the once reliably red Georgia into a battleground over the course of the last two election cycles. Now, Democrats are hoping that they — and the multiracial coalition they assembled — can deliver another miracle in 2022.

Groups like the voter registration group New Georgia Project and Black Voters Matter have worked for years, some for more than a decade, to mobilize the political power of Black voters and other voters of color in the state. Those minority voters make up 40 percent of the electorate, but have historically been neglected by both parties. Grassroots groups have long struggled to draw investment from funders and campaigns, many of whom believed their efforts to be in vain.

In 2018, their years of work paid off when Democrat Stacey Abrams ran for governor, rewriting Democrats’ playbook in a narrow loss powered largely by nonwhite voters. Organizing modeled on Abrams’s run helped Joe Biden flip the state by a less than 12,000 vote margin in 2020, a critical win in his path to the presidency. And it assisted long-shot Democratic candidates Jon Ossoff and Raphael Warnock in surprise victories in their US Senate races, handing the party narrow control of Congress.

With Abrams’s second campaign for governor against incumbent Republican Gov. Brian Kemp, as well as Warnock’s reelection — and Democrats’ prospects of maintaining control of the Senate — in the balance, Democrats and their grassroots allies are hoping to once again organize their way to victory.

Inspired by the critical role that grassroots groups have played in turning Georgia purple, national Democrats launched what party officials say is their largest ever statewide coordinated campaign for a midterm election last month.

The “Georgia Votes” campaign — a joint initiative by the Democratic Senatorial Campaign Committee, the Democratic National Committee, and Georgia Democrats — is aimed at re-energizing the multiracial coalition that grassroots groups helped turn out in 2020, though it doesn’t directly support or coordinate with those groups, in accordance with campaign laws.

Georgia grassroots groups are also going into overdrive to ensure that the enthusiasm of voters of color stays high this fall and isn’t suppressed by the state’s new restrictions on voting; they’re providing education, additional support at the polls, and defenses against voter roll purges.

“There are incredible organizations on the ground who have been doing the hard work for years to engage Georgia voters, and our state is better off for it. As [the Democratic Party of Georgia] builds out its coordinated campaign to mobilize voters across the state this cycle, we’re grateful to all the organizers working to make sure every Georgian’s voice is heard in our democracy,” said Rep. Nikema Williams, chair of the Democratic Party of Georgia.

The party is facing stronger national headwinds this time, including an unpopular Democratic president and high inflation. But grassroots groups are confident those factors can be overcome in Georgia. They say they’ve been chasing what many might have considered improbable political outcomes for years.

“We’ve been doing this work behind what feels like enemy lines. This has been a high stakes fight for the future of Georgia since we launched in 2014,” said Nsé Ufot, chief executive officer of the New Georgia Project.

The biggest concern heading into 2022 for Georgia Democrats and grassroots groups was how they were going to mitigate the adverse impacts of SB 202, a law signed by Kemp in March 2021 that implemented new restrictions on voting including limitations on mail-in voting, stricter ID requirements, a ban on providing food and water to voters standing in line, and measures that would transfer power from state and local election officials to legislators.

As Vox’s Zack Beauchamp wrote at the time, “the intent of the bill is clear: to wrest a state that’s increasingly trending blue back toward Republicans.”

In the November 2021 municipal elections, the first contests under the new law, the rejection rate for mail-in ballot applications jumped to 4 percent, up from less than 1 percent in the 2020 general election. More than half of those rejected applications were turned away because they were submitted after the new, earlier deadline set by SB 202, and the majority of those voters never went on to vote in-person instead. Another 15 percent of rejected applications were denied because they had missing or incorrect identification information required by the new law.

It’s not yet clear how Democrats’ Georgia Votes initiative — which is still just a few weeks old — plans to respond to SB 202. Grassroots groups, however, have ramped up their efforts to educate voters on relevant deadlines and the requirements set by the new voting law this year. Fair Fight has been double-checking voters’ registrations and their precinct locations and pushing as many people as possible to vote early and in-person given the issues with mail-in ballot rejections, according to the group’s director of communications Xakota Espinoza.

But having to do that extra education is an additional burden on groups that are also trying to motivate people to turn out.

“Not everybody that we’re in conversation with is already committed to taking part in the process. That conversation is made more difficult when you’ve got to spend more time just explaining some stuff about the process,” said Cliff Albright, the co-founder of Black Voters Matter, a voter mobilization group in Georgia.

Grassroots groups have also provided support at the polls. During the primaries last month, Latino Community Fund Georgia sent volunteers to 10 precincts in Chatham, Cobb, Gwinnett, Fulton, and DeKalb counties, where there are large Hispanic populations, to provide Spanish translation. But in Chatham County, poll managers turned some of their volunteers away, said Michelle Zuluaga, the organization’s civic participation manager. Black Voters Matter set up tables with refreshments near the polls, since they’re prohibited from handing out food and drink to people waiting in line under the new law.

Despite the additional hurdles posed by SB 202, overall turnout in the May 24 primaries was high, especially considering it’s a midterm election year. Official election day figures aren’t final, but a record 857,000 people voted early, up from 299,000 in the 2018 primaries. That included about 483,000 Republicans and 369,000 Democrats.

But grassroots organizations say that their painstaking efforts to register and mobilize voters delivered high turnout in spite of the obstacles created by SB 202. “The high turnout is evidence of our organizing and evidence that Georgia voters know and understand the power of their vote,” Ufot said.

The challenges ahead of the general election

The high-profile showdown between Abrams and Kemp, that control of the Senate is at stake once again, and the voter registration and education work done by the grassroots groups could mean high turnout in the fall. Democrats worry that could exacerbate complications posed by SB 202. Grassroots groups are consequently putting a new focus on voter protection in the months ahead. And though the Democratic Party has its own plans to combat voter suppression, grassroots groups aren’t planning to rely on just that.

The New Georgia Project is preparing to fight back against what it anticipates will be escalating attempts to purge voter rolls under SB 202, which allows any one person to challenge the voter registration of an unlimited number of voters at once. For instance, the group successfully fended off a challenge to the eligibility of 13,000 voters from a single man in Forsyth County earlier this year.

The group is also partnering with legal aid organizations to train lawyers specializing in criminal and election law to defend voters accused of fraud. SB 202 created several new election crimes, including making it a felony to witness someone else mark their mail-in ballot at home unless they are providing legally authorized assistance, and state lawmakers enacted a law in April that allows state police to investigate election crimes and voter fraud.

“We know that we have some zealous prosecutors in the state that are absolutely going to take advantage and try to prosecute Georgians under these new laws,” Ufot said.

But beyond protecting voters, they’re also just trying to keep up the enthusiasm in Georgia through November. That means continuing to speak to the issues that matter to Georgians, including current economic turmoil, which is being felt acutely among workers making the state minimum wage of just $5.15; Georgia’s failure to expand its Medicaid program, leaving roughly half a million people ineligible for health insurance coverage; and the threat to free and fair elections posed by former President Donald Trump’s efforts to overturn the 2020 election results in the state.

Reproductive rights have also become a breakthrough issue since the US Supreme Court’s draft opinion overturning its 1973 precedent in Roe v. Wade was leaked to Politico. Georgia already has the highest maternal mortality rate in the country — a rate that’s even higher for Black women specifically.

Activists are not alone in those voter protection and persuasion campaigns. State and national Democrats’ coordinated campaign is working to train and organize volunteers to help get out the vote and engage Georgians, especially communities of color, ahead of the November election. As part of that, they have also put together a voter protection team that plans to combat voter suppression.

That said, not all grassroots advocates feel like they can rely on national Democrats to do the work of communicating the stakes of this election. With years of experience in the state, many feel uniquely equipped to drive voters to the polls in November.

“There needs to be some messaging support at the national level,” Albright said. “But we can’t count on them to get the messaging right. That’s why we do our own messaging.”