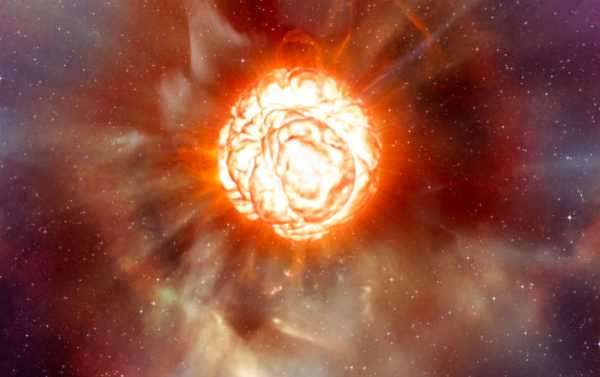 The red giant star Betelgeuse surprised astronomers with a sudden dramatic drop in luminosity between October 2019 and April 2020, leaving them mulling over various possible scenarios to explain this change in the brightness.

A bright star in the constellation of Orion, Betelgeuse, has been the subject of numerous astronomical speculations due to its dramatic decline in brightness; it’s now suggested that it shed its luminosity as a result of an unusually large star spots on its surface.

A study, “Betelgeuse fainter in the sub-millimetre too: an analysis of JCMT and APEX monitoring during the recent optical minimum”, carried out by an international team of astronomers led by Thavisha Dharmawardena of the Max Planck Institute for Astronomy in Heidelberg, dismisses previous conjectures that it was dust, recently ejected by supernova Betelgeuse, which caused the star to dim.

​In their observations, published in The Astrophysical Journal Letters on 16 June, the team of scientists used the Atacama Pathfinder Experiment (APEX) in Chile and the James Clerk Maxwell Telescope (JCMT) on Mauna Kea in Hawaii – two telescopes that measure electromagnetic radiation in the sub-millimetre wave spectral range, evaluating new and archival data.

​As this part of the spectrum enables one to observe the distribution of cosmic dust, astronomers were able to test one of the earlier suggested reasons for the star’s dimming.

The study’s findings did not support the presence of dust, said the researchers.

Instead, they demonstrated that temperature variations in the photosphere, or in other words, the luminous surface of Betelgeuse, generated a dimming. The most plausible explanation for this, say the scientists, are gigantic cool star spots, similar to sunspots, dotting the star’s surface.

Red giant stars like Betelgeuse are known to experience variations in their brightness, yet the striking drop in luminosity to about 40 percent of its normal value registered by the red super-giant between October 2019 and April 2020 left open the question of what had caused the sudden change.

Various possible reasons were considered by astronomers; one theory was that dust produced by the star was obscuring it.

There had also been suggestions that Betelgeuse, which is about 500 light-years from Earth and reaching the end of its life, was about to go supernova and explode in a dramatic dying spectacle.

However, the star instead began to recover and by May 2020 it had recouped some of its original brightness.
Although star spots are relatively common in giant stars like Betelgeuse, they have never been registered on such a scale, nor is there enough information about their lifetimes.

In the case of the Sun, the number of spots ebbs and increases over an 11-year cycle; studies may one day shed light on the question of whether giant supernovas have a similar mechanism.