If every employee walked or jogged for an extra 15 minutes each day, the world could see an economic boost of $100 billion, according to a new report on the economic benefits of a more physically active population.

Those economic gains would come from three mechanisms, researchers explain in the report, which was published this week by RAND Europe and the U.K.-based health insurance group Vitality.

Regular physical activity is associated with a host of health benefits, including a decreased risk for chronic conditions like high blood pressure and heart disease, as well as mental health gains, such as a decreased risk of anxiety and depression, according to the Mayo Clinic.

Overall, those health gains translate into reduced mortality, and the longer people live, the longer they can stay in the workforce, which would grow the overall labor force in addition to economic output.

Better employee health could translate into reduced absenteeism and presenteeism, which is when employees are at work but attempting tasks at less than full strength, both of which drive down productivity.

Of the global economic gains detailed in the report, 30% could be attributed to reduced mortality and reduced sickness and absences, while 70% were linked to reduced presenteeism. 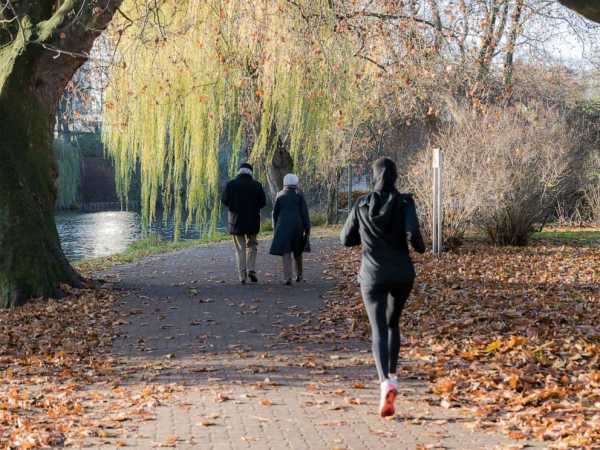 In this undated file photo, people walk and jog in a park.

“Despite the documented positive effects of exercise, insufficient physical activity has become more common over the past decades,” said Christopher van Stolk, RAND’s executive vice president and coauthor of the report.

At present, 30% of the global population is thought to be physically inactive, and there are 5 million deaths linked to physical inactivity each year.

“The evidence shows that we can create healthier and more prosperous societies,” van Stolk said.

“Creating enduring change in physical activity is hard,” he added. “There are significant barriers to change.”

As the researchers detail in the report, employers face steep obstacles if they want workers to exercise more. In additional to individual behaviors and attitudes, which can be difficult to alter, structural barriers, like lack of resources, time and access to safe spaces to exercise, all can hinder workers’ efforts to be physically active.

(MORE: Why Stretching Is a Waste of Time for Runners)

The RAND/Vitality report comes on the heels of a meta-analysis published in the British Journal of Sports Medicine that found even relatively small doses of exercise, as little as running once a week, could significantly reduce the risk of an early death.

That improved mortality risk held even though the requisite 50 minutes per week of running falls short of the 150 minutes of exercise per week that the World Health Organization and the Department for Health and Human Services currently recommend.