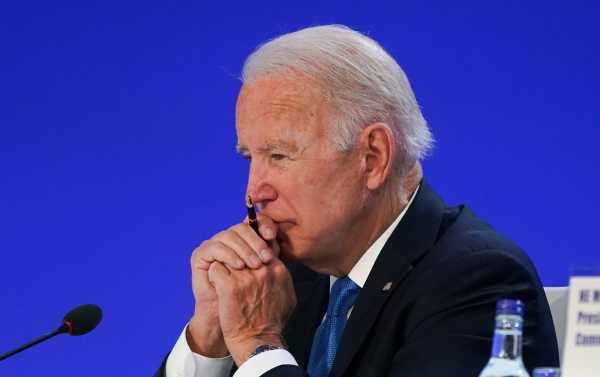 Democrats’ loss in Virginia’s governor race and a closer-than-expected contest in New Jersey this week came as a surprise to many. But in retrospect, there was one glaring warning sign: President Joe Biden’s declining approval rating. When presidents have bad approval ratings, their party tends to do poorly in downballot races.

In FiveThirtyEight’s average of polls, Biden’s approval is down to 42.9 percent, with his disapproval rating up to 50.7 percent. It’s obviously not good to be nearly 8 points underwater, but with historical context, Biden’s situation looks even worse.

For one, Biden’s disapproval rating at this point in his term is higher than all but one president’s since the advent of modern polling. Only Donald Trump’s was higher, by about 6 percentage points, per FiveThirtyEight’s historical numbers.

Biden’s approval rating is already lower than Barack Obama’s and Bill Clinton’s were just before their disastrous 2010 and 1994 midterms — Obama’s approval was at 45 percent, and Clinton’s was at 47.2 percent. Democrats lost 63 House of Representatives seats in 2010 and 54 seats in 1994.

As for Trump, Biden’s 42.9 percent approval rating right now is only slightly higher than Trump’s 42 percent on the eve of the 2018 midterms, when Republicans lost 40 House seats.

The one potential silver lining for Biden is that the trajectory of Trump’s numbers shows that some improvement in the second year is possible, albeit rare. Trump’s approval rating hit its lowest point in 2017 but improved by about 5 points over 2018, which likely helped him avoid an even worse midterm defeat. It is possible that if conditions in the country improve, Biden’s numbers could rebound.

Of course, things could also get worse.

Biden’s numbers haven’t always been this awful. Like most presidents (Trump excepted), Biden started his term reasonably popular — per FiveThirtyEight’s tracker, his approval rating was about 53 percent and his disapproval was about 36 percent.

Also like most presidents, he lost some of that sheen, but as of mid-August things still looked decent for him — 50 percent approval and 43.8 percent disapproval. That’s not so bad for a president in the modern polarized era who won with 51.3 percent of the popular vote.

Then things took a turn. In the final two weeks of August, as headlines were dominated by chaos in Afghanistan while Biden was withdrawing troops, the president’s numbers dropped precipitously, and his disapproval rating topped his approval rating for the first time.

And things never really got better — indeed, they got worse. The media moved on from Afghanistan, but the rise of the delta variant and renewed economic woes loomed large as summer changed to autumn. Biden’s approval kept dropping, his disapproval kept rising, and his numbers are now at their worst yet.

In mid-August, a majority of Americans approved of Biden, and now a majority disapprove of him. In just two and a half months, he lost the country.

The timing of Biden’s decline makes it hard to deny that the tumultuous Afghanistan withdrawal played a significant part. But it’s not the whole story. Biden was already trending downward, albeit more slowly, beforehand, and continued trending downward after national attention turned elsewhere.

Part of this might be unavoidable — some frustration and backlash against the president are common in advance of the midterm elections — but, again, Biden’s numbers are worse than Clinton’s or Obama’s at this point. While a loss of support for the president may be common, just exactly how much support is lost can vary.

One big factor is probably that Americans went from believing, in June, that the end of the pandemic was imminent and economic recovery was here to being rudely awakened by delta and higher prices over the following months.

In a recent NBC News national poll, net approval of Biden’s performance on the economy dropped from +9 in April to -17 in October. Net approval of his handling of the pandemic dropped from +42 to +4 during that same span. About half of respondents also gave Biden low marks for “competence.”

From Afghanistan to his legislative agenda to the economy to the coronavirus, the narrative has been the same: that Biden is floundering and ineffective. Some of those criticisms are fair; some are blaming him for events out of his control. But to have any hope of averting midterm disaster, that perception has to change.