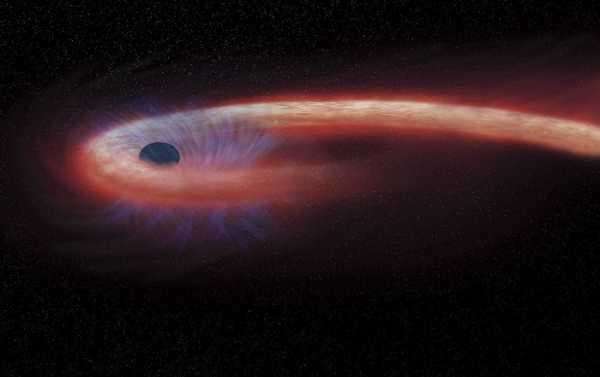 Astronomers using cutting-edge skywatching devices have identified an extremely fast-growing black hole, cataloging it as a ‘monster’ that eats the mass equivalent of our sun every two days.

Astronomers with the Australian National University (ANU) have discovered the fastest-growing black hole in the known universe, a super-massive celestial object some 12 billion light years distant, thought to be at least the size of 20 billion of our suns.

Research suggests that the object is so large and has so much gravity that it pulls into itself the mass equivalent of one of our suns every two days, radiating matter-transforming energies back into space on a galactic scale.

“This black hole is growing so rapidly that it’s shining thousands of times more brightly than an entire galaxy,” stated Dr. Christian Wolf of the ANU Research School of Astronomy and Astrophysics, cited by Sciencedaily.com.

“If we had this monster sitting at the center of our Milky Way galaxy, it would appear 10 times brighter than a full moon. It would appear as an incredibly bright pinpoint star that would almost wash out all of the stars in the sky,” he added.

Also known as a quasar, the energy bursting out of the newly-discovered supermassive black hole is primarily in ultraviolet wavelengths, but contains a significant outpouring of x-rays.

“If this monster was at the center of the Milky Way,” Wolf detailed, “it would likely make life on Earth impossible with the huge amounts of x-rays emanating from it.”

Using the SkyMapper telescope at ANU’s fabled Siding Spring Observatory, Wolf and his team detected the uncommon and dramatic celestial body, releasing their findings in a paper titled: Discovery of the most ultra-luminous QSO using Gaia, SkyMapper and WISE.

“These large and rapidly-growing black holes are exceedingly rare, and we have been searching for them with SkyMapper for several months now. The European Space Agency’s Gaia satellite, which measures tiny motions of celestial objects, helped us” find the black hole, he said.

“We don’t know how this one grew so large, so quickly in the early days of the Universe,” Wolf remarked, adding that astronomers were eagerly seeking additional examples of the rare object.

“The hunt is on to find even faster-growing black holes.”

Wolf noted that, given their extreme brightness, these gigantic black holes can be used as celestial place-holders to advance the study of the formation of elements during the period just following the Big Bang.

The object is so bright that “scientists can see the shadows of objects in front of the supermassive black hole,” Wolf noted.

“Fast-growing supermassive black holes also help to clear the fog around them by ionizing gases, which makes the Universe more transparent.”