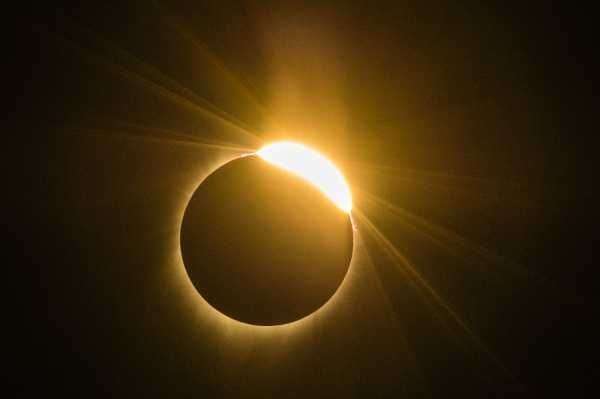 This is a total solar eclipse, and the very next one is soon: Tuesday, July 2. On that day, a shadow will fall over the southern Pacific Ocean and parts of Chile and Argentina. It’s the first total solar eclipse since the August 2017 “Great American Eclipse,” which bisected the continental United States.

People lucky enough to be in the path of the totality will see a sublime sight (if it’s not cloudy): the entire face of the sun turned black by the moon, all surrounded by a glowing white light. That glowing white light is the solar corona, or atmosphere. And it’s only visible to our eyes during an eclipse.

The upcoming eclipse might be particularly beautiful, as it will occur right before sunset. The peak of the eclipse, the totality, will last for around 2 minutes.

Here’s the path the totality of the eclipse will take over South America:

And here’s a zoomed-in view of the path of the shadow. It’ll pass near Buenos Aires, the capital of Argentina. 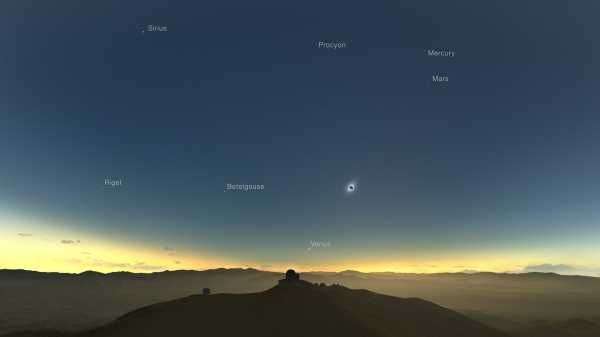 South America is very far away from me. Can I live-stream the eclipse?

Possibly the best place to view the eclipse will be at the La Silla Observatory, an astronomy facility perched high on a mountain in Chile’s Atacama Desert. There, away from light pollution and relatively safe from the threat of cloud cover, the total eclipse will begin at 4:39 pm local time, a little more than an hour before sunset.

Chile is in the same time zone as the Eastern United States. And many of us will be able to follow along from afar: The European Southern Observatory, which runs La Silla, will live-stream the event starting at 3:15 pm ET on Tuesday, July 2.

Why do we have solar eclipses?

The simple answer: because the moon occasionally covers the sun in its path across the sky.

The complicated answer: because of three key conditions that rarely occur all at the same time.

One side of the moon is always lit by the sun, but the lit side isn’t always facing Earth. This is how we get the phases of the moon. For a solar eclipse to occur, it needs to be in its “new moon” phase.

During the new moon, the dark side of the moon is directly facing Earth.

So if the dark side of the moon has to be facing the Earth for a solar eclipse to occur, why don’t we have them every new moon?

Because the moon’s orbit isn’t perfectly matched up with the Earth’s.

(No one is completely sure why — but it might have to do with how the moon was likely formed: from a massive object smashing into Earth.)

Basically, this means during most new moons, the shadow misses Earth.

But there are two points in the moon’s orbit where the shadow can fall on the Earth. These are called nodes. 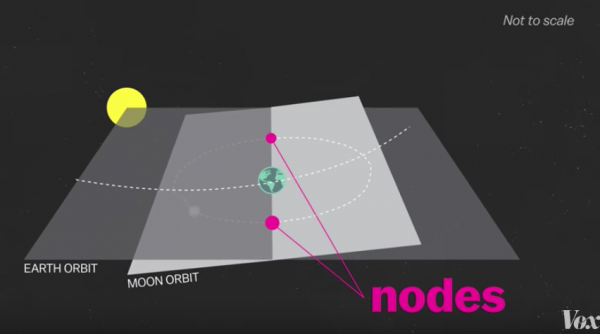 For a total eclipse to occur, the moon needs to be at or very close to one of the nodes.

3) The moon’s distance to the Earth

You might remember this from middle school science: The moon’s orbit around the Earth is not a perfect circle. It’s an ellipse. 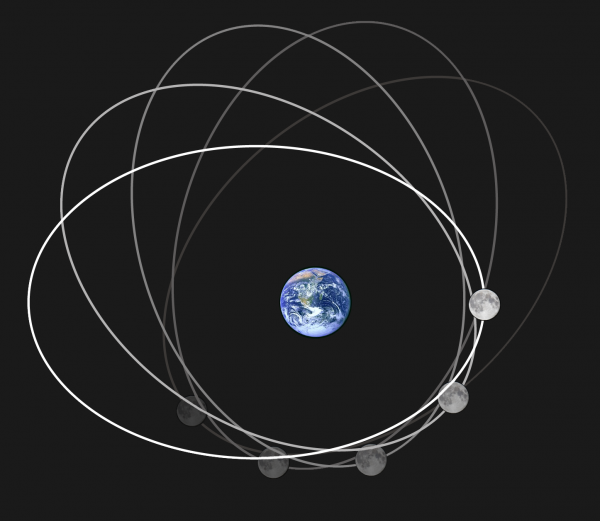 There’s a point in the orbit where the moon is farthest from the sun, and a point where it’s closest. For a total eclipse to occur, the moon needs to be near its closest approach to Earth.

Eclipses can occur when the moon is at apogee (its farthest distance from the Earth), but the moon won’t block out the entire sun. These are called “annular” or “ring of fire” eclipses, because a white-hot band of sun will encircle the darkened face of the moon. They look cool. 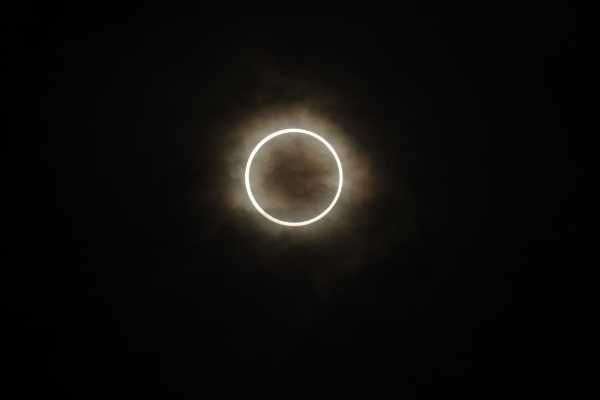 When all three conditions line up, you get this: The Earth and sun are aligned with the moon at a node, and a shadow is cast on the Earth. (The opposite configuration — when the full moon is facing Earth — is when we have lunar eclipses.)

The very darkest part of the shadow is the totality — it’s where the entire disc of the sun is blacked out by the moon. While most of the US will see a partial eclipse on August 21, only those in the 70-mile-wide bull’s-eye of the shadow will see the totality. 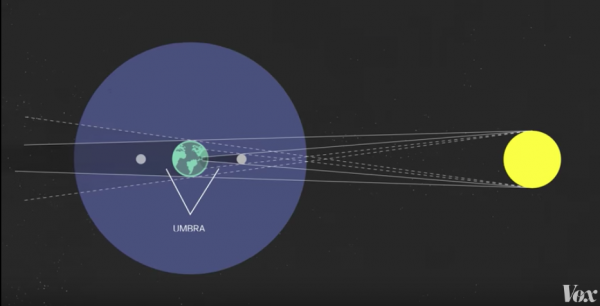 When is the next solar eclipse in the USA?

Total solar eclipses happen somewhere in the world every 18 months or so. That’s how long it takes for the specific conditions that create eclipses (the phases of the moon, the distance of the moon to Earth, and the moon crossing the plane of Earth’s orbit) to line back up.

The very next one will occur on December 14, 2020. It will also pass over Chile and Argentina (lucky them!).

The next solar eclipse over the United States will be in 2024. 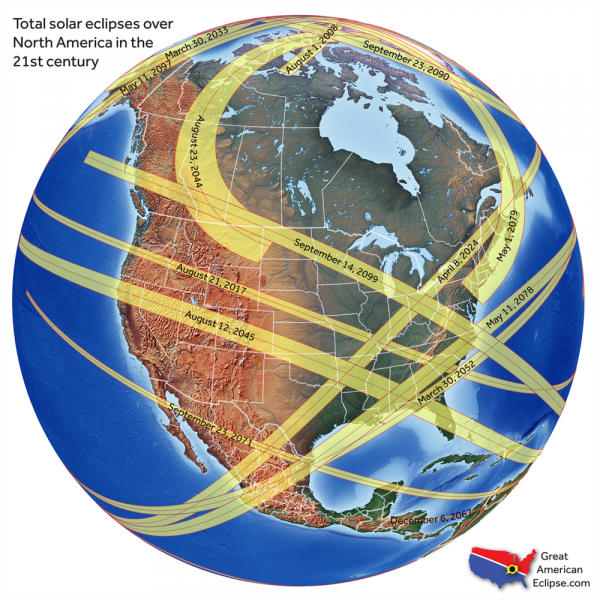 NASA keeps a catalog of all the eclipses (both solar and lunar) that have occurred or will occur from 1999 BC to the year 3000. That’s five millennia, mind you.

So that’s why we know, for instance, that on January 27, 2837, a total solar eclipse will pass over southern Mexico. (Will anyone be around to see it?)

There’s some comfort in knowing that people 1,000 years from now can look up in wonderment at the same natural phenomenon we see today. Life on Earth may change, but the sun, moon, and sky will not.