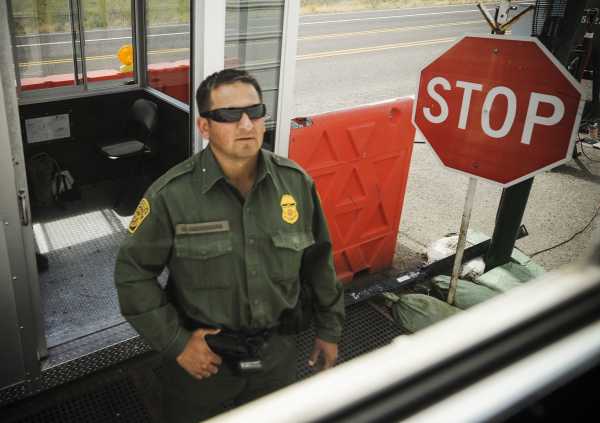 You may have seen a video like this recently: camera-phone footage of Border Patrol agents getting on a bus or train, then walking down the aisle asking passengers, seemingly at random, if they’re American citizens.

Here’s one that went viral in January:

The video, posted by the Florida Immigrant Coalition, shows US Customs and Border Protection (CBP) agents questioning a Greyhound bus passenger in Fort Lauderdale. The conversation isn’t audible, but the passenger appears to hand agents some paperwork before they escort her off the bus.

A few days later, a passenger on an Amtrak train in Syracuse, New York, filmed Border Patrol agents as they asked passengers where they were born.

Both videos were viewed nearly 4 million times on Twitter, prompting thousands of angry tweets, with many blaming President Donald Trump for the hardline tactic.

These incidents have led to much confusion — and have raised a few questions about Border Patrol’s authority and the rights people have in these encounters.

Is this part of Trump’s new hardline immigration policy?

The first thing to note is that this is not, in fact, a new Trump initiative to crack down on illegal immigration. Border Patrol agents have been doing this for a while — even under the Obama administration. I know this because I watched Border Patrol agents do the same thing back in 2010. I was a crime reporter in South Florida, and I accompanied agents as they questioned passengers at a Greyhound station in the Fort Lauderdale area.

At the time, Border Patrol agents said they were trying to track down undocumented immigrants heading to Florida from Mexico. But Border Patrol’s methods and growing anxiety about immigrant rights in the Trump era have raised concerns about the legal basis for such a practice, and whether current law gives these agents too much power.

The Department of Homeland Security does not publish data on how often CBP agents stop and question people in the border zone, so it’s hard to tell if it’s happening more often under Trump. (More on this below.)

The videos sparked outrage partly because this kind of intrusive questioning seems like a constitutional violation. The Fourth Amendment gives Americans a certain right to privacy and protection from unreasonable government intrusions and searches.

What most Americans don’t realize is that near a US border, the bar for what is considered a “reasonable” stop is far lower than for the rest of the country. Border Patrol agents can question anyone within 100 miles of a US land or coastal border about their immigration status, as long as they have a “reasonable suspicion” that the person may be in the country illegally.

Here’s the thing: Most Americans live in this so-called 100-mile zone. It covers all of Florida (where one video was filmed) and most of New York state (where another one was filmed). It covers several other states entirely — including New Jersey, Delaware, and Rhode Island — the nation’s capital, and the country’s largest cities, including New York City and Los Angeles.

“I think there’s a question of whether it’s even constitutional to define an entire state like Florida as a border zone,” said Ira Kurzban, an immigration lawyer and adjunct law professor at the University of Miami.

Congress created this border zone as part of the Immigration and Nationality Act of 1946. The law granted immigration agents the authority to “board and search for aliens any vessel within the territorial waters of the United States and any railway car, aircraft, conveyance, or vehicle.” However, they could only do this “within a reasonable distance” from an external US boundary.

At first, that distance was just 25 miles. But in 1953, the Department of Justice published a rule redefining a reasonable distance to “a distance of not exceeding 100 air miles of any boundary of the United States.” In 2013, a group of senators tried to shrink the 100-mile zone to 25 miles along the northern border. The provision was added to a bipartisan immigration reform bill that passed the Senate that year, but a similar bill never made it through the House.

Over the years, the Supreme Court has upheld Border Patrol agents’ authority to stop and search people in the border zone, while also defining some limit to their powers. For example, the Court has ruled that agents must have probable cause to believe that someone committed an immigration violation to search their car in a border zone, but they only need a reasonable suspicion (a lower standard of proof) to stop and question them. If they establish a roadside checkpoint within the border zone, they can stop and question anyone who drives through about their immigration status.

How does someone prove they are a US citizen?

That’s nearly impossible to do in situations like the ones filmed on camera. That’s because Americans traveling within the US typically do not — and are not required to — carry around passports, birth certificates, certificates of citizenship (issued to people born outside the US who gained citizenship through a parent), or naturalization certificates (issued to people who became citizens after the age of 18). Those are the most common documents someone could present to prove US citizenship. Even a driver’s license doesn’t indicate whether someone is in the country legally. (Several states issue licenses to drivers without legal status.)

Border Patrol agents know this, so they really don’t expect anyone to prove that he or she is a US citizen. What they are looking for is a sign that someone is not. This is where it gets weird. They just need “reasonable suspicion” to believe that someone is not legally in the United States before questioning them.

During my reporting trip with Border Patrol in 2010, the agents told me they approached people on the Greyhound bus based on a number of cues: unusual behavior, defensive body language, thick accents, and clothing style. If someone’s story changes or if it seems they’re lying, agents take the person to their processing station.

Agents told me they don’t consider race in deciding whom to question — but they are technically allowed to.

In United States v. Brignoni-Ponce, a 1975 Supreme Court case, the Court ruled that it was a violation of the Fourth Amendment for Border Patrol agents to stop a car only because the driver looked Mexican. But while the Court agreed that “apparent Mexican ancestry” does not, on its own, justify reasonable suspicion that a person is undocumented, the justices did rule that it is a “relevant factor.”

To justify a stop, the Court said an agent needs several reasons to pull over a car near the border, such as observing a heavily loaded van or a car with an unusual number of passengers. That could also include “the characteristic appearance of persons who live in Mexico, relying on such factors as the mode of dress and haircut.” In other words, race can be part of the equation.

Can I be arrested if I can’t prove that I’m American?

Giving Border Patrol agents this much leeway to stop and question people means their instincts — or “reasonable suspicions” — can sometimes be wrong. It’s not unheard of for American citizens and immigrants with legal status to be detained during these kinds of patrols.

In criminal cases, a police officer needs “probable cause” that someone committed a crime before he or she can arrest someone. The standard to detain someone for a suspected immigration violation is much lower. (Being in the United States illegally is a civil infraction, not a criminal violation.)

Kurzban, the immigration law professor, says Americans and legal residents do have legal recourse if they are unlawfully detained — though they would have to prove that agents stopped and questioned them solely because of their race, which is a violation of the Fourth Amendment and the Equal Protection Clause of the 14th Amendment.

How often does this happen?

The Department of Homeland Security doesn’t publish data on how many people agents stop and question in the border zone, only how many people they detain. In 2017, Border Patrol agents arrested 310,531 people at checkpoints and roving patrols across the country. This includes people apprehended trying to cross the border illegally.

Details of these arrests are scarce, and immigrant rights groups have repeatedly tried to get more information through Freedom of Information Act requests.

In 2012, Families for Freedom, a legal aide group for immigrants in New York, succeeded in suing the agency for records related to immigration arrests at bus and train stations in the state.

What they discovered was alarming: At one bus station in the Rochester area, Border Patrol agents mistakenly arrested 300 people with legal status from 2006 to 2010.

That included immigrants with green cards and visitors with tourist visas. It also included 12 American citizens, according to a 2013 report from the group:

Border Patrol agents eventually released everyone who had legal status, but the practice has outraged civil liberties groups.

Lawyers for the American Civil Liberties Union have repeatedly criticized the 100-mile zone, saying that it subjects nearly two-thirds of the US population to Border Patrol’s “so-called investigatory detention and warrantless searches.”

“Allowing CBP to divert its attention from the border distracts from its primary mission and results in widespread violations of Americans’ rights to property and liberty, including Fourth Amendment and other constitutional violations,” writes Chris Rickerd, an attorney for the ACLU.

What should I do if this happens to me, or to someone near me?

Kurzban, who has represented more than a dozen US citizens who have been unlawfully arrested by immigration authorities, said that there is no ideal way to respond. The first thing to remember is that no one is required to answer a Border Patrol agent’s questions in these scenarios. “You have the right to remain silent,” says Kurzban.

The problem with that, he adds, is that the agents can then interpret silence as a sign that you are hiding something, and may consider that a factor for reasonable suspicion that you are not in the country legally. If detained by Border Patrol, a person should immediately try to call a lawyer.

People who are mistakenly arrested by immigration agents have some legal options, Kurzban says, but they are often hard cases to pursue because federal law enforcement officers have “qualified immunity.” That means the law protects them from civil lawsuits as long as they didn’t clearly violate a person’s constitutional or statutory rights.

To get some sort of compensation for unlawful immigration detention, a person would need to show that the Border Patrol agent clearly violated the law in making the arrest.

“The question then becomes, what was their reasonable suspicion to approach you?” Kurzban said. “It’s a violation of the Fourth Amendment to profile someone based solely on race. That’s pretty clearly subject for a lawsuit.”