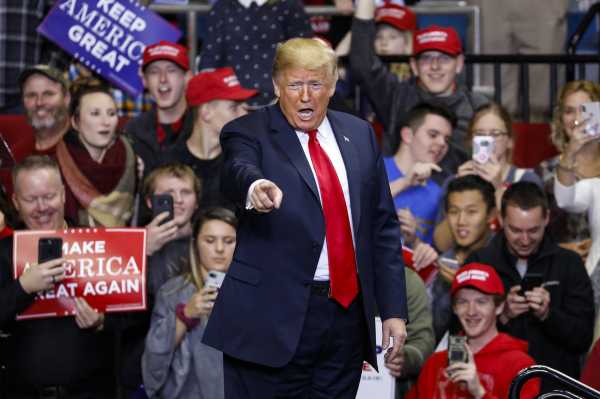 For Democrats, there is one big fear heading into the 2020 election: A booming economy could save Donald Trump.

The adage “it’s the economy, stupid” condensed this conventional wisdom to four words: Voters (rightly or wrongly) hold the president accountable America’s financial health and their perceptions of how they and the country are doing economically should be the most important factor when they vote. Politico recently covered how, using economically based predictors, Trump actually seems “on track for a landslide.”

But the link between the economy and presidential approval has become “increasingly untethered,” as several political scientists writing at Political Behavior put it. The break began during the Clinton administration and weakened considerably under George W. Bush. By the time Obama took office, the two became completely severed:

John Sides, the political scientist who with Lynn Vavreck wrote the seminal book The Gamble about the 2012 presidential election, told me over email, “This could complicate an election forecast.”

In other words, does the economy really tell us anything at all about whether Trump will be reelected in 2020? Who knows! We’re in uncharted territory. Nevertheless, it is worth remembering that factors beyond which Democrat prevails in the primary to face Trump will be in play during the 2020 campaign.

We should start here, as Vavreck emphasized to me: Trump is the incumbent, and incumbency is a proven advantage in presidential elections. Its degree and its reasons are the source of debate, but a table via David Mayhew’s research published in Political Science Quarterly in 2008 makes this obvious (and was only bolstered by Barack Obama’s win in 2012): So Trump starts with one obvious edge heading into the 2020 campaign. Let’s consider then what we can learn — and what we can’t — from some of these other indicators about what might happen in 2020.

After consulting with Sides, I elected to focus on four of them: Trump’s approval rating, consumer confidence, the US gross domestic product, and the unemployment rate.

Head-to-head polling between Trump and any prospective Democratic nominee seems nearly useless at this point. Aside from Joe Biden (who isn’t running yet) and Bernie Sanders, many Americans haven’t yet formed their opinions on the various Democrats seeking their party’s nomination.

But presidential approval ratings have always been strongly linked to voting behavior, and everybody knows Trump. Here is the RealClearPolitics average of the president’s approval rating, from the start of his presidency to now: 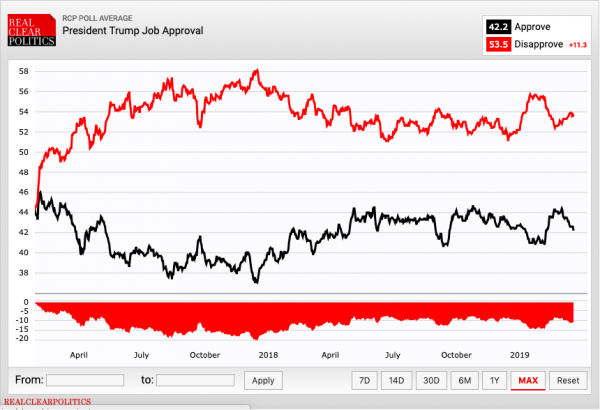 Trump has been consistently unpopular throughout his first two years. At his best, so far, he was 7 points more unpopular than popular. A recent uptick has swiftly eroded. And as Vox’s Ezra Klein wrote last summer, this has been in defiance of a relatively solid economy:

Trump’s approval rating is the metric to watch as we endure all the unpredictable twists and turns that might precede the 2020 election. House Democrats could uncover more scandals as they investigate the Trump administration. The outcome of Robert Mueller’s investigation will surely register. An international crisis would also likely affect how the voters feel about the president.

Consumer sentiment doesn’t actually look all that strong either

Before we dive into the economic data, a word of warning from Sides: The debate in political science circles is whether voters care about the year preceding an election or if they look back over the previous two years.

Either way, when thinking about November 2020, we have either barely entered the economic period voters will be using to evaluate the state of the country and Trump’s presidency or we aren’t even there yet and none of what’s happened so far will actually matter by the time people head to the polls.

“Changes in economic indicators matter more closer to the election,” Sides told me. “So the consequential economic trends, if there are any, probably haven’t happened yet.”

But we will press on, starting with consumer sentiment, a useful way to understand how the American people are feeling about the economy.

Here is how UM’s consumer sentiment index has shifted during Trump’s presidency:

This is a noisy metric, as you can see. Early March data shows consumer sentiment continuing to rebound. But taking the long view, American consumers are feeling either a little less rosy than when Trump came into office or about the same.

That is still a notable improvement on how the citizenry felt for the bulk of the Obama presidency, as pessimism persisted in the wake of the Great Recession. But it’s hardly the American renaissance Trump likes to pretend he is overseeing.

With our final two variables, GDP growth and the unemployment, Sides offers one more critical piece of context: The important thing is not the absolute number, but the trend that we’ve seen since the president took office. As Sides noted, Ronald Reagan’s reelection at 7 percent unemployment might seem surprising until you recall the unemployment rate was at 10 percent when he took office. 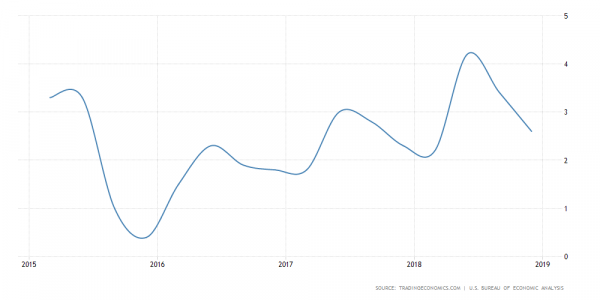 In general, GDP has been growing a little faster under Trump than it was at the end of Obama’s presidency. Leaving alone whether the president deserves any credit for that improvement, it would bode well for his reelection chances if it continues.

The question is whether it will. The Federal Reserve recently downgraded its GDP growth projections for 2019, from 2.3 percent to 2.1 percent, and for 2020, down to 1.9 percent. It’s not a guarantee, but those projections are a warning sign for the president.

The unemployment rate is still going down under Trump

Unemployment under Trump has largely maintained the same trend we saw in the last two years of Obama — by which I mean it’s kept going down. So two more specific economic indicators look pretty good for Trump. But consumer sentiment and the president’s approval rating are, respectively, a mixed bag and a bit of a disaster.

It’s worth noting a couple of other caveats. One, these macro-trends obviously do not account for the Electoral College or the way presidential campaigns are conducted and won in the United States. How specific states are faring and feeling has an outsize impact. Second, the economic models cited by Politico include other indicators (gas prices, inflation, etc.) that we have not covered.

Regardless, the messy picture here is probably an appropriate one. Trump is unpopular and consumer confidence is iffy, but the underlying economic data is sound. The president is probably looking at better odds of reelection than his poor approval ratings or the unending stream of bad headlines would suggest. But he’s got weaker odds than he probably should, considering the state of the economy and incumbency advantages.

Let us end by remembering — and I cannot emphasize this enough — how long we have to go. Not only in news cycles and Twitter rants, but for the economy. We are just entering the period that will likely prove decisive in how American voters evaluate Trump at the end of his term. The 2020 campaign is, in every meaningful sense, only just beginning.