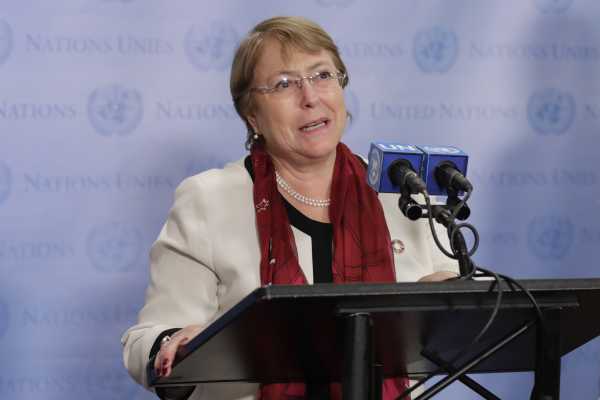 The UN high commissioner for human rights condemned the US for the poor conditions in migrant detention centers on Monday, saying she was “appalled” and “deeply shocked” by reports from detention facilities.

In a statement released on Monday, Michelle Bachelet said that detention should be the last resort, and should be used for the shortest period of time in conditions that meet international human rights standards, she said.

“In most of these cases, the migrants and refugees have embarked on perilous journeys with their children in search of protection and dignity and away from violence and hunger,” she said. “When they finally believe they have arrived in safety, they may find themselves separated from their loved ones and locked in undignified conditions. This should never happen anywhere.”

Bachelet especially criticized the US for detaining children, which “may constitute cruel, inhuman or degrading treatment that is prohibited by international law.” Detaining children could have serious impacts on their development, which is why it should never be practiced, she said.

“As a pediatrician, but also as a mother and a former head of state, I am deeply shocked that children are forced to sleep on the floor in overcrowded facilities, without access to adequate healthcare or food, and with poor sanitation conditions,” she wrote.

In her statement, Bachelet noted a July report from the Department of Homeland Security’s Office of Inspector General, which documented the poor conditions of the migrant facilities with pictures.

The New York Times’s Nick Cumming-Bruce pointed out that Bachelet, the former president of Chile, doesn’t have a reputation for being confrontational with governments, but officials said that the inspector general report prompted her to speak out. And this isn’t the first time her office has called out the US for its violation of human rights. Most recently in May, Deputy Human Rights High Commissioner Kate Gilmore criticized the Alabama abortion ban, calling the attack on women’s rights a “crisis.”

The inspector general report called for DHS to take “immediate steps to alleviate dangerous overcrowding and prolonged detention of children and adults in the Rio Grande Valley.” During the week in June that inspectors visited CBP facilities, more than 8,000 people were in custody, and 3,400 of them had been held for more than 72 hours. Accompanying pictures showed migrants sitting shoulder to shoulder in overcrowded spaces.

In the statement, Bachelet said she acknowledges the complexity of the immigration crisis and the challenges that the US faces. Yet she said the current system only focuses on detecting and deporting immigrants rather than fixing the root problem that causes mass immigration, including poverty, violence, and discrimination in their home countries.

The US, however, seems to be going in the opposite direction: After months of President Donald Trump threatening to cut aid from the Northern Triangle countries, the State Department officially announced on June 17 that the US would withhold a large chunk of its financial support until the Central American countries made significant steps in reducing the flow of migrants. $185 million from the 2017 budget dedicated to aid would be held back until the situation improved, while $370 million from the 2018 budget would be entirely reallocated to other projects, the department announced.

However, as Bachelet notes, the programs funded by US aid can help reduce the flow of migrants by reducing local violence, creating more jobs and combating poverty — and an absence of these programs could likely trigger more migration.