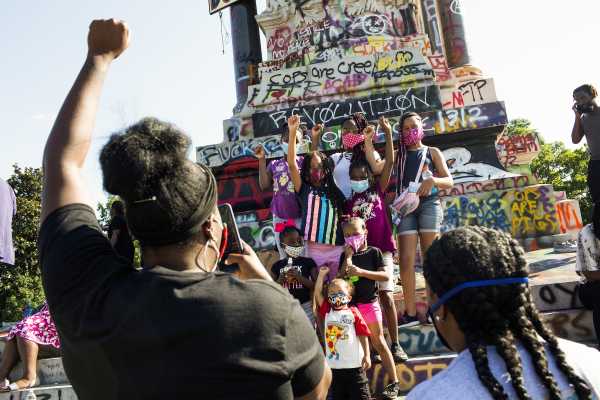 The order marks the latest in Trump’s ongoing battle against protesters who have pushed for the removal of monuments and statues that memorialize Confederate leaders, and other figures who supported slavery, white supremacy, or colonialism. Several monuments have been torn down or removed in recent weeks amid protests against police brutality and racism, including statues of Confederate Gen. Robert E. Lee in Alabama and Confederate Gen. Albert Pike in Washington, DC.

Trump responded to the removal of the statue in Washington by tweeting, “These people should be immediately arrested. A disgrace to our Country!” and with the order, has provided a framework for arrests to be made.

The order directs the Department of Justice to “prosecute to the fullest extent permitted under Federal law” people who damage government monuments, participate in “efforts to incite violence,” or damage religious property. Damaging federal property can be punished by up to 10 years in prison.

Trump also included a directive to withhold federal funding to cities and local law enforcement agencies that have “surrendered to mob rule” by making no attempts to stop protesters from damaging monuments. It’s unclear, however, to what extent the administration could actually enforce this provision.

Trump announced the edict on Twitter, hours after tweeting a poster from the FBI seeking information about 15 people alleged to have been involved in attempting to tear down a statue of Andrew Jackson near the White House on Monday night, and calling for all 15 to face “10 year prison sentences!”

The statues of Confederates and others who advanced white supremacist ideals have become a campaign issue for the president as he re-engages with his reelection campaign. Speaking to supporters in Arizona on Tuesday, Trump praised the US Park Police for breaking up the White House protest and preventing the statue of Jackson, who signed the 1830 Indian Removal Act, which led to the deaths of thousands of Native Americans, from coming down.

The protesters “hate our history, they hate our values, and they hate everything we prize as Americans,” Trump told the audience.

Protesters, however, have argued that the monuments — particularly Confederate ones honoring individuals who tried to destroy the United States — salute an ugly history that runs counter to the American values enshrined in the Constitution.

As Rep. Barbara Lee (D-CA) put it in unveiling legislation that would remove Confederate monuments from the US Capitol, “Confederate statues and monuments still pay tribute to white supremacy and slavery in public spaces. … It is time to tell the truth about what these statues are: hateful symbols that have no place in our society.”

Symbols of white supremacy have been coming down nationwide

Monuments — mostly to Confederate generals — have been coming down for several weeks amid ongoing demonstrations against police brutality and racism sparked by the police killing of George Floyd in Minneapolis in May.

Protesters have pulled down or defaced a number of statues, such as that of Confederate Gen. Williams Carter Wickham in Richmond, Virginia, which was spray painted, pulled down with ropes, and urinated on.

Some local public officials have chosen to take down statues through more official means, such as the Democratic mayor of Birmingham, Alabama, who told protesters preparing to pull down the city’s Confederate Soldiers and Sailors Monument: “Allow me to finish the job for you.”

Monuments to slaveholding historical figures have also been targeted, as have those that featured racist themes. Statues of George Washington were toppled in Portland and defaced in Baltimore last week. Likenesses of Ulysses S. Grant, Spanish priest Junípero Serra, and “The Star-Spangled Banner” writer Francis Scott Key were taken down in San Francisco.

House Speaker Nancy Pelosi recently ordered the removal of portraits from the US Capitol of former House Speakers who served in the Confederacy, and called for 11 statues of Confederate figures to be removed from the building’s Statuary Hall collection.

Nascar, which has long been associated with a largely white, Southern fan base, banned Confederate flags at its events following pressure from the organization’s only Black full-time driver, Bubba Wallace.

Trump has consistently opposed these changes, and quickly shut down conversation about changing the names of Army bases named after Confederate leaders after Pentagon officials said for the first time the names were open to discussion.

The order is the latest step in this opposition — although it is not clear that the president’s views match those of most Americans; for example, a Quinnipiac University poll taken June 11 to 15 found 52 percent of Americans back the removal of Confederate monuments from public spaces (with a 2.7 percentage point margin of error).