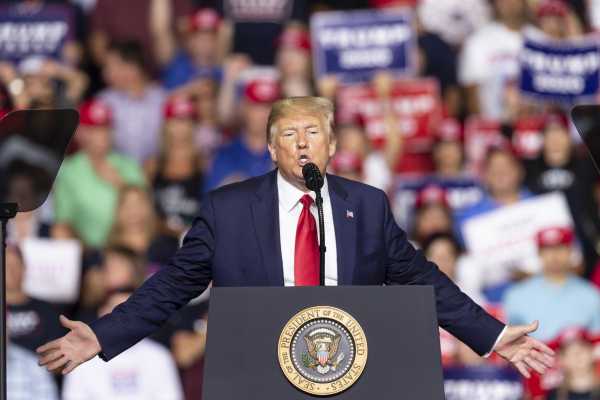 The White House says that everything’s great and there’s nothing to worry about on the economy. Anyone who says otherwise is lying. And even if there is a problem, it’s not President Donald Trump’s fault, it’s someone else’s.

It doesn’t bode well for a possible future where there is a recession under Trump: Who’s to say he’s not just going to lie about it?

Economists, forecasters, and other experts have been sounding the alarms regarding a potential impending recession in recent weeks. A confluence of factors, including the US-China trade war, slowdowns in the US manufacturing sector and some global economies, and a wonky concept called the inverted yield curve, have heightened anxieties a downturn might be on the horizon. That’s not to say you should panic: There are no guarantees an economic downturn is around the corner, and even if there were, most aren’t nearly as bad as the 2007-’09 Great Recession.

But if you listen to Trump, everything’s fine anyway.

There are also political concerns at play: For any president staring down reelection in less than 15 months, the prospect would be unnerving. But for Trump, who has staked much of his presidential success on bragging about the strength of the economy and stock market, it’s likely especially concerning.

Which is why he seems set on saying there’s nothing wrong in the first place. It’s a signal of what may happen if and when the US economy is in real trouble: Trump will probably deny it or, at the very least, place the blame on someone else, such as his hand-picked Federal Reserve chair, Jerome Powell, or the classic “fake news.”

Trump’s first course of action amid concerns the US economy could weaken is a familiar one for the president in the face of information he doesn’t like: deny, deny, deny.

Last week after the Dow Jones Industrial Average fell by 800 points in one day because the bond market signaled a recession might be on the horizon, the president took to Twitter to shore up confidence that the economy is just fine.

“Unlike others, the economy is strong,” he tweeted on August 14, the day of the big stock market drop (from which it has since recovered).

The next day, Trump declared on Twitter that the US is “by far, the Biggest, Strongest and Most Powerful Economy in the World,” with consumers in the “best shape ever” and business optimism riding high. He blamed the media for any suggestion otherwise and insisted his trade war with China, which economists say is doing harm to the economy, is going just fine.

“I don’t think we’re having a recession,” the president told reporters over the weekend. “We’re doing tremendously well. Our consumers are rich. I gave a tremendous tax cut.”

Trump also held up Walmart’s latest strong quarterly earnings report as evidence that the economy is strong. It’s not the best piece of evidence: Walmart is the type of store that can do well during a recession — it did last time around — because people have to do more discount shopping.

Even if there is a problem, Trump insists, it’s only because of the Fed and Powell, who Trump appointed over former Fed Chair Janet Yellen in 2018. Trump, apparently incensed that Powell intends to act independently as head of the US central bank, has consistently complained about his pick and pressured him to keep interest rates low in hopes of bolstering the economy and stock market. The Fed cut interest rates in July for the first time in a decade, but that still hasn’t appeased the president. He wants it to do more and, in the meantime, plans to use it as a scapegoat.

Maggie Haberman at the New York Times reported that Trump’s conspiracies and blame game tactics are going on behind closed doors as well:

It’s not just Trump; his aides are saying there’s nothing to worry about as well. Over the weekend, both Larry Kudlow, Trump’s top economic adviser, and Peter Navarro, a Trump trade adviser, took to the Sunday shows to downplay any concerns about a possible recession.

“What I can tell you with certainty is that we’re going to have a strong economy through 2020 and beyond with a bull market,” Navarro told Martha Raddatz on This Week.

If the economy does falter, it’s not great to have a president who’s going to lie about it

There’s no surefire way to know that the economy is or isn’t headed for a recession. Economists are more concerned a downturn might be on the horizon now than they have been previously, but if economic downturns and stock market busts were easy to predict, well, we’d have a much better track record of guessing. The US in the midst of its longest expansion ever right now, and eventually, something’s got to give. But we aren’t going to be able to pinpoint when it will happen, or even how bad it will be.

But if and when a recession does come, it would be nice to have a president who would be honest about it and better able to use all available tools to combat it. Say the US-China trade war contributes to a downturn: To many administrations, it would be worth weighing the costs and benefits of a trade dispute, even if they did ultimately stay the course. Trump, however, appears inclined to just say that’s not the problem.

If the US does slip into a downturn and companies start laying off employees and closing factories, consumers stop spending, and investors pull their money out of the market, that’s a moment for the US government to take earnest steps to try to remedy the situation and figure out what’s next. A Trump tweet complaining that CNN is out to get him isn’t going to help you keep your factory job. (See: GM in Ohio.)

That’s not to say Trump won’t do anything. While speaking with reporters on Tuesday, Trump confirmed reporting from the Washington Post the day prior that the White House was considering a payroll tax cut to try to keep the economy from slowing down. He said the White House had been thinking about it for “a long time,” even though the White House told the Post the day before that it wasn’t under consideration. It’s worth noting that, presumably, a payroll tax cut or any other tax law change would require buy-in from House Speaker Nancy Pelosi, given that Democrats control the House.

He also continued to pressure the Fed on interest rates while speaking with reporters in the White House and said a payroll tax cut might be needed not because of a potential recession, but instead because of the Fed. “If the Fed would do its job, we’d have a tremendous spurt of growth,” he said.

Of course, Trump and Republicans already passed a massive tax cut in late 2017 that cut taxes for most Americans, though it largely benefited corporations and the wealthy. The law was supposed to spur economic growth to at least 3 percent annually. But that didn’t happen: US economic growth has not hit that mark.

Trump has pulled a tax cut out of thin air in the past when convenient, only for it to go away. Remember the fake pre-midterms middle-class tax cuts that died soon after voters went to the polls last year?

There are already enough nerves around the economy right now. The president isn’t exactly helping.