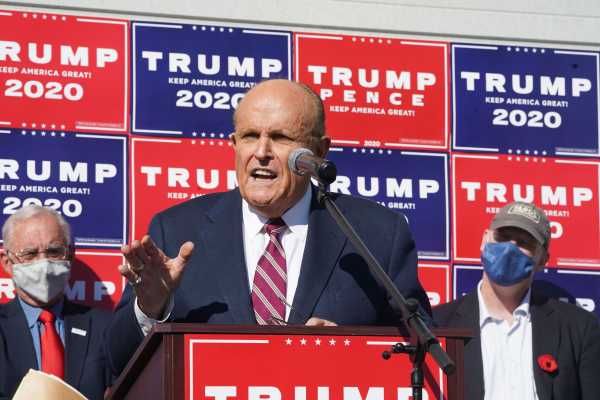 President Donald Trump’s efforts to question the results of the 2020 presidential election using legal challenges have taken several major blows, with many lawsuits rejected or abandoned in key states, and prominent law firms withdrawing from lawsuits on behalf of the president.

On Friday, Trump lawsuits suffered setbacks in three battleground states — all of which have been declared for President-elect Joe Biden.

In Michigan, a state judge rejected a Republican request to halt the certification of the vote in Wayne County — where Detroit sits — as “unwieldy,” according to the New York Times. The GOP had also alleged a variety of inappropriate conduct at polling stations, charges the judge dismissed as unspecific in some cases, and as “rife with speculation and guesswork” in others.

In Arizona, the Trump campaign abandoned a lawsuit alleging that ballots marked for Trump with felt-tipped markers had been unfairly thrown out — which was inspired by a false rumor — after determining that the number of votes at stake were too small to be meaningful, according to the Times.

And in Pennsylvania, a judge rejected six separate efforts by the Trump campaign to block the counting of nearly 9,000 mail ballots in two counties. The campaign had requested that those ballots be discounted because they were missing some requested information, like addresses or dates on outer envelopes, according to the Washington Post. Even if the ballots had been thrown out, however, the outcome in the state would have remained the same: Biden won Pennsylvania by more than 60,000 votes.

Trump’s campaign has also been abandoned by key members of its legal team. Porter Wright Morris & Arthur, one of the few prominent law firms to represent Trump’s legal efforts to question election results, withdrew from the federal lawsuit it had filed for the Trump campaign that attempted to alter the election’s results in Pennsylvania on Thursday — just days after filing the case.

And on Friday, a high level employee at Jones Day, one the largest law firms in the US, announced during an internal meeting that the firm would not be involving itself in election litigation, despite the fact that Jones Day served as counsel to Trump’s 2016 and 2020 presidential campaigns.

Both firms were targeted on social media by the Lincoln Project, an advocacy outfit run by Republicans who oppose Trump. According to the Times, some lawyers at both firms had voiced discomfort or resigned in objection to their firms’ involvement with the Trump campaign both in the run-up to and in the aftermath of the election. The news was met with pointed criticism by the Trump campaign.

“Cancel Culture has finally reached the courtroom,” Tim Murtaugh, the Trump campaign’s communications director, said in a statement in response to the news of Porter Wright’s withdrawal. “Leftist mobs descended upon some of the lawyers representing the president’s campaign and they buckled.”

These defections and losses are merely among the latest setbacks to Trump’s efforts to overturn the results of the election through the courts. The Trump campaign and its allies have been filing a dizzying array of lawsuits — so many that, according to Politico, there is no accurate count of how many have been submitted. What is clear, however, is that Trump has a losing record: The campaign has won only one case and lost 15.

And that win — a ruling that Pennsylvania mail-in voters who failed to provide identification on or before November 9 will have their ballots discarded — won’t affect the current vote count. The minor number of ballots that will be affected had not yet been counted.

Giuliani’s takeover suggests things are going to be messy

As the president’s haphazard, throw-stuff-against-the-wall legal strategy has begun to fall apart, Trump has put his personal lawyer, Rudolph Giuliani, in charge of his campaign lawsuits — a move that has distressed many of the president’s advisers, who see it as intensifying the chaos behind the president’s attempts to cling to power.

Trump appointed Giuliani to take over his legal campaign after news came out on Friday that his campaign was dropping its Arizona lawsuit.

Analysts say that the president’s decision to make one of his most polarizing and bombastic surrogates the new coordinator for his legal campaign just as it seems to be buckling suggests that he’s leaning into making litigation even more of an optics game.

“Mr. Trump has been trying every possible option to change the outcome and trying to get what he sees as fighters’ making his case, often conflating a media strategy with a legal one,” the New York Times’ Maggie Haberman explained in her report on Giuliani’s new position.

According to Politico, top Trump campaign aides and advisers have been frustrated with Giuliani’s role in the president’s legal challenges — and fear that his incendiary and reckless style will hurt their plans for carefully orchestrated legal battles. Recently, Giuliani has made more sweeping claims than the Trump campaign has been willing to indulge, and has circumvented agreed-upon strategies when talking to the media.

And Giuliani reportedly offers the president more optimistic takes on the odds of existing lawsuits than many other advisers. According to the Times, Trump put Giuliani on speakerphone during a meeting with his aides on Thursday, and Giuliani scolded them for not telling the president the truth about his chances of winning in court.

Frustrated with this sort of behavior, the campaign reportedly plans on pursuing its own legal strategy separately from Giuliani’s efforts.

All told, these developments reflect what appears to be a collapsing legal machine, in which Trump is exhausting his options to effectively use lawsuits to question ballot counting procedures — an endeavor which had always been unlikely to alter the outcome of the election in the first place.