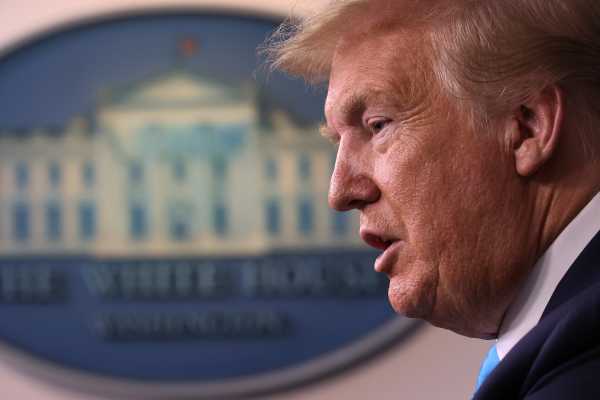 On Friday, President Trump fired intelligence community Inspector General Michael Atkinson, the oversight official responsible for forwarding the Ukraine whistleblower’s report to Congress and triggering impeachment. It seemed Trump was using the coronavirus as cover for an act of retribution, punishing an official he blamed for his humiliating impeachment.

Two developments on Tuesday showed that these concerns were, if anything, somewhat understated.

First, he publicly attacked Health and Human Services Inspector General Christi Grimm for publishing a report critical of the federal coronavirus response, tweeting that she was an Obama loyalist attacking him with “Another Fake Dossier” (his spelling). Shortly afterward, news broke that Trump removed another inspector general, Glenn Fine, from his job overseeing coronavirus relief spending — abruptly and without explanation.

The lesson from Tuesday is that Atkinson’s firing was not merely revenge for impeachment. It was a warning that, during the coronavirus crisis, Trump would not tolerate similarly vigorous oversight of his conduct. Official watchdogs are on notice: Doing your job too effectively could be career suicide.

This is a war on the very concept of oversight — and a sign that the United States is not immune from a global trend of creeping coronavirus authoritarianism.

Why oversight matters now more than ever

The president’s disdain for the concept of checks on his authority has been one of the most consistent throughlines of his presidency. But after Trump’s acquittal in his Senate impeachment trial, the president seems to have concluded that he could get away with even more brazen efforts to bend the government to his will.

In February, weeks before the epidemic took over our lives and our attention, Trump supervised a purge of high-ranking officials who had testified during the impeachment trial, challenged him internally on the suspension of military aid to Ukraine, and prosecuted political allies like Roger Stone arrested as part of the Mueller probe.

It was only a matter of time before Trump’s eye turned toward inspectors general, who are intrinsically opposed to Trump’s view of the government as working for him. These offices exist to conduct oversight over the department or institution they’re attached to — investigating illegality and wrongdoing to bring it to the public and Congress’s attention. Their sole reason for existing is to check the executive branch’s power and make sure its vast authority isn’t abused.

Atkinson’s firing represents a conclusion of Trump’s business of punishing anyone involved in the Ukraine and Russia “hoaxes.” The tweet attacking Grimm is ominous in the same way — a threat, not yet carried out, of retaliation against an inspector general for having the temerity to do her job.

Previously the acting inspector general at the Pentagon, Fine had been recently appointed to run oversight on the $2 trillion coronavirus stimulus by a panel of his peers — inspectors general from across the government. This oversight effort was the result of Democratic demands during the congressional fight over the stimulus bill, designed to ensure that Trump didn’t divert funds to his family or political interests. Fine seemed like an ideal choice for this critical job: widely respected by his peers, who see him as talented and independent.

He was fired before he had any time to get stimulus oversight up and running. This was, in effect, a preemptive attack: Fine, unlike Atkinson or Grimm, had not yet done anything (publicly known, at least) to incur Trump’s wrath.

The precise mechanism of Fine’s dismissal is also noteworthy. Instead of being outright fired from any federal post, he was technically demoted — removed from the coronavirus post and relegated to the Pentagon’s No. 2 spot. The new No. 1 at Defense is Sean O’Donnell, also the Environmental Protection Agency’s inspector general, who will now have to oversee two major departments at once. O’Donnell’s aggressive oversight efforts at EPA had led to him to clash with EPA Director Andrew Wheeler, leading some to draw some dark conclusions.

“Privately, some people within the government’s inspector general community suggested that the appointment of Mr. O’Donnell to the Pentagon post will divert his oversight from the EPA, which has continued to move forward with Mr. Trump’s agenda of weakening public health and environmental regulations, even as the coronavirus rages,” the New York Times’s Charlie Savage and Peter Baker report.

In one fell swoop, then, the Trump administration has rendered coronavirus spending oversight leaderless — giving the president greater freedom to flout Congress’s explicit anti-corruption provisions, at least temporarily — while seemingly weakening the public’s visibility into his environmental deregulation campaign.

Trump is just one of many leaders with authoritarian impulses to exploit the coronavirus to expand his powers. Some, like Hungarian Prime Minister Viktor Orbán’s new law giving him the power to rule by decree indefinitely, are loudly sold as necessary measures for fighting the virus itself. Others simply slip through, the state taking advantage of the public’s preoccupation with the problems caused by Covid-19 to quietly eliminate barriers against executive overreach.

Trump’s war against inspectors general, whether they are directly involved in watching his coronavirus response or otherwise, fits squarely into the latter category. The president’s campaign to turn the federal government into an instrument of his will, to make the bureaucracy his employees rather than the public’s, is being pursued while we’re busy being fearful in our homes.