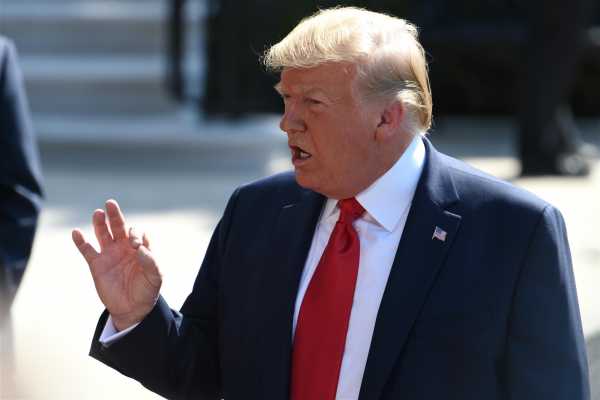 President Donald Trump announced on Tuesday morning that he was going to delay implementation of looming taxes on a broad set of Chinese-made goods and sent the stock market soaring.

Just one week ago, financial markets were heading in the opposite direction as his administration officially designated China as a currency manipulator.

In both cases, the literal implications of the policy changes are modest. Instead, the market reaction seems to be about reading the tea leaves as to Trump’s longer-term intentions.

Designating China as a currency manipulator had no automatic consequences for policy in Washington or Beijing. It was simply seen as an escalating move and a sign of hardening hearts, an indication that Trump’s fans in the business community might not be getting the pre-election climbdown from trade war that they craved.

Conversely, delaying the tariffs on a portion of the scheduled-for-tariffing products by a few months does not have a particularly large direct impact on the American economy. Stocks went up instead largely because it was seen as a sign that the previous signs of escalation in the trade negotiations had been read wrongly. Trump seems to remain attuned to stock market signals and nervous about indications that global financial markets don’t like trade confrontation. That gives investors reason to believe that Trump ultimately won’t push trade war to the limits, and that sent markets soaring.

The fact that Trump climbed down in the midst of increasing international attention to escalating protests and crackdowns in Hong Kong gives Chinese leaders a timely propaganda win. But critically, nothing in the vast US-China trade dispute docket has actually been resolved. Trump just blinked a little bit in a mutually harmful conflict that has no obvious endpoint.

Last year, the Trump administration imposed a new 10 percent tax on many categories of Chinese-made goods.

The list was carefully constructed to try to focus mostly on things that are sold to businesses rather than products an ordinary consumer would buy in stores because the administration wanted to minimize sticker shock to American consumers while putting pressure on Chinese businesses. Then after some delays, this spring Trump ended up raises that tariff to a 25 percent tax while threatening to go forward with a new 10 percent tax on the rest of Chinese imports.

That new tax had been scheduled to go into effect on September 1, but today the US Trade Representative’s Office announced that there will be a delay until December 15 for “certain articles … for example, cell phones, laptop computers, video game consoles, certain toys, computer monitors, and certain items of footwear and clothing.”

If you look at the full list, it is, again, basically an effort to exempt normal consumer goods from the taxes. That includes everything from iPhones to “record players, other than coin‐ or token‐operated, with loudspeakers” (i.e., a turntable you might buy for your house but not a jukebox) to baby monitors, watch bands, violins, sleeping bags, badminton nets, cigarette lighters, and diapers. There is a list of products with tariffs going forward in September, which is composed mostly of food and agricultural commodities.

The USTR’s official reason for the delay is that “certain products are being removed from the tariff list based on health, safety, national security and other factors and will not face additional tariffs of 10 percent.”

This appears to reflect the unfortunate Trump era habit of having government officials just tell casual lies about the conduct of public policy. Trump has pretty clearly been worried about a loss of political support from farmers, so he is sticking with tariffs on Chinese agricultural products because that helps farmers. But he’s delaying the tariffs on other consumer products until late enough in the year for retailers to get through the critical Christmas shopping season without any need for price hikes.

Nobody truly knows what Trump is trying to accomplish

China really has been placed under significant pressure by the tariffs.

Officials have attempted to preserve the viability of Chinese exporting companies by allowing the value of their currency to decline, which means that everyday Chinese people are taking a hit to their living standards. There are also dozens of longstanding questions about the basic viability of the Chinese growth model, which is based on very low levels of household consumption with tons of money poured into domestic investment projects — projects that many outside observers believe are saddling Chinese banks with bad debts.

It’s also far from clear that China’s big push to get on the cutting edge of technology is totally working. China’s efforts to build a domestic competitor to the A320 and Boeing 737 has featured delays and massive cost overruns, and the plane still does not seem to work.

But China’s basic negotiating objectives are clear: Officials would like the US to stop implementing the tariffs without China needing to make fundamental changes about how its economy works.

Whether that strikes you as a good thing or a bad thing on balance, it’s just not that big of a deal. And it doesn’t change the basic structure of NAFTA as a program to facilitate deep integration of product markets across the US, Canada, and Mexico.

For a while, it seemed like Trump was aiming for something similar with China — talk a big game, wring out a few concessions for a few specific industries, and declare victory.

But at other times, Trump has seemed to want to seriously push for China to genuinely dismantle huge swathes of how its current economic policy works. Trump has also seemed to want to push for China to reduce the bilateral trade deficit with the United States to zero. Either of these would be a tall order, but they’re fundamentally different things, and Trump equivocates between them.

Another idea catching on in some national security circles is that the US shouldn’t be hoping to resolve this at all; proponents believe it would be a smart foreign policy move to “decouple” the two economies so that the US would just be doing less trade with China.

The partial climbdown on tariffs is a ray of hope for business people who want Trump to take a “declare victory and go home” approach to the trade conflict, hence the market surge. The surge itself will be used by some of Trump’s advisers to press the case that he should do a quick deal and enjoy the resulting stock market enthusiasm. But Trump himself has provided very little insight into what he’s thinking, and he’s much too dishonest for anything he says to have much value anyway.