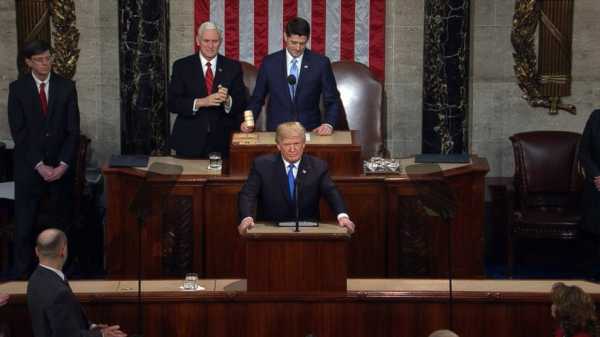 But he stood before Congress with an approval rating at a historical low for a president just one year in office and he touted a strong economy as the stock market was down for a second day in a row. 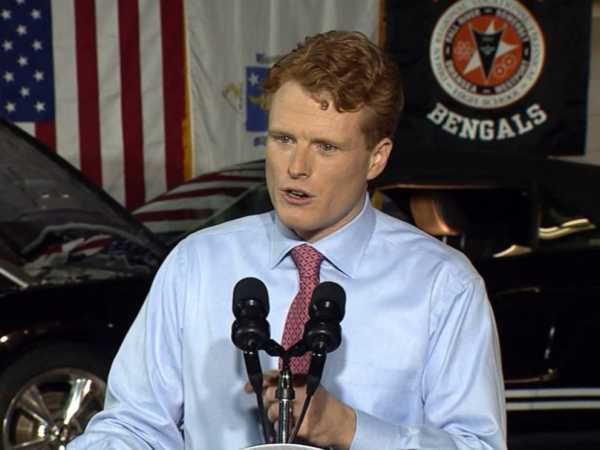 “We have gone forward with a clear vision and a righteous mission — to make America great again for all Americans,” Trump said.

“America First” was a message the president used again and again in the 2016 election. And the concept of “making America great again” is one some Republicans have already grasped onto to use during the upcoming primary season.

Trump’s push of that message comes as Republicans and Democrats are struggling to come to terms on immigration reform and a budget deal to keep the government running.

ANALYSIS: In State of the Union, Trump’s contradictions were on display

His speech did not appear to be well-received by many Democrats, a number of whom did not stand and clap when Trump entered the House chamber to deliver his remarks and several of whom looked uncomfortable during the speech.

“After a long and divisive year, many Americans were yearning for the president to present a unifying vision for the country,” said Democratic Leader Sen. Chuck Schumer in a statement. “Unfortunately, his address tonight stoked the fires of division instead of bringing us closer together.”

The president delivered his remarks just a week after a government shutdown that came, in part, because of deep bipartisan divides on issues like immigration reform, border security, and government spending. The government will shut down again if a spending deal is not reached before Feb. 8. A deal must be reached on DACA by March 5. 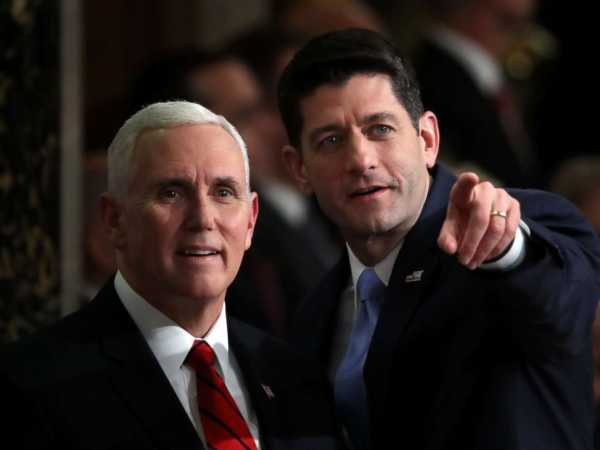 Mark Wilson/Getty ImagesVice President Mike Pence and Speaker of the House Paul Ryan attend the State of the Union address in the chamber of the U.S. House of Representatives Jan. 30, 2018 in Washington.

Trump addressed immigration about 45 minutes into his remarks, touting the immigration plan the White House unveiled last week. Democrats criticized that plan for asking for $25 billion for a border wall in exchange for a pathway to citizenship for Dreamers, people brought to the United States illegally as children.

Trump said the proposal “fulfills my ironclad pledge to only sign a bill that puts America first.”

And with the House visitor galleries full of Dreamers, brought by Democrats to highlight the issue and who might have to leave the country if a deal isn’t reached, Trump said “Americans are dreamers too” – another argument that could find its way into the GOP campaign play book.

“I am extending an open hand to work with members of both parties — Democrats and Republicans — to protect our citizens of every background, color, religion, and creed. My duty, and the sacred duty of every elected official in this chamber, is to defend Americans — to protect their safety, their families, their communities, and their right to the American Dream. Because Americans are dreamers too,” the president said.

In the Democratic response, Rep. Joe Kennedy, D-Mass., reminded Dreamers his party was there for them.

“You are a part of our story. We will fight for you. We will not walk away,” he said.

The immigration debate – both what to do with Dreamers and how to handle border security – will likely be a big theme of 2018. Border states like Arizona and Texas have competitive Senate races this year.

And Democrats hope their message of fighting for the underdog will resonate with the Latino electorate.

Democrats are trying to capitalize on the fever raised in their party after Trump’s election, a momentum that saw Democratic women win a record number of seats in Virginia’s House of Delegates in November. Republican candidate Roy Moore, who faced questions of alleged sexual misconduct, lost in the deep red state of Alabama in a special election Senate race in December – another event that boosted Democratic hopes to retake at least one chamber of Congress this year.

“The only thing most Americans will take away from tonight was Congressional Republicans looking more like puppets for anything Trump says, does and wants. Any time Trump wanted them to cheer, they just asked how loud and the American people won’t forget that,” said Democratic strategist Jesse Ferguson. 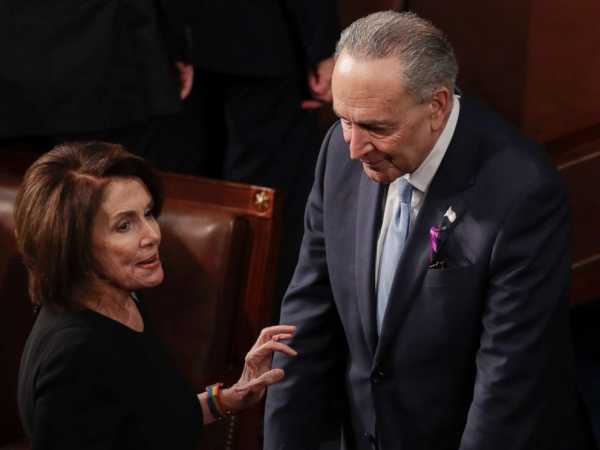 In his speech, there was also a defense of his record among groups who could potentially come out in large numbers for Democrats in an election that is the first national referendum on his presidency.

Since reaching 16.8 percent in 2010, the African-American unemployment rate has steadily declined to its record low of 6.8 percent.

He reminded viewers — especially those in the middle class — that many workers have gotten bonuses from the tax cuts, another bragging line for Republicans.

Trump did not demand a repeal and replacement of Obamacare – a longtime staple on the GOP campaign trail and an effort that failed after Republicans took control of the White House and Congress.

But the president did tout the repeal of the individual mandate, one of the his base’s biggest demands.

“We repealed the core of disastrous Obamacare – the individual mandate is now gone,” he said.

Democrats need a 24-seat pickup in the House to win back the majority this year.

Bolstering their hopes are the high number of Republican retirements and polling that shows the president’s approval rating is in trouble and that voters are open to selecting Dems in November.

There are 33 Republicans who are running for another office or not seeking re-election this year, according to a count by ABC News.

In the latest ABC News/Washington Post poll, Trump’s approval rating was 36 percent, which is the lowest of any president after one year in office in modern polling.

Democrats hold a 14-point advantage among likely voters when it came to a congressional preference in the latest ABC News/Washington Post poll.

In the Senate, the road is tougher. Democrats are defending 26 seats to the Republicans’ eight. And of those 26 seats, Trump carried the states of 10 of them in the 2016 election.

The GOP holds two-seat majority in the upper chamber.

And there’s no guarantee the party will control either chamber in Congress after November even though midterm elections are traditionally tough for the incumbent president.

Republicans took back the House in a landslide election in 2010, picking up 63 seats in a feat that then President Barack Obama called a shellacking. In 1994, the year of Bill Clinton’s first midterm election, Republicans won the lower chamber in what became known as the Republican Revolution. The GOP won 54 seats and took the majority in the lower chamber for the first time since 1952.

Ironically, it was a Republican president – George W. Bush – that escaped this trend. The 2002 elections were held 14 months after the September 11 attacks and the president’s high approval rating in the wake of that and the war on terror overshadowed the vote that year.

However, looming policy battles could have a dampening effect on the upcoming midterms, some lawmakers warn.

“President Trump’s administration has a monumental list of policy achievements that conservatives are thrilled about, but all of that positive momentum could come to a screeching halt if progress isn’t made on the critical issues of Obamacare and border security,” said former Sen. Jim DeMint, a leader in the conservative movement, in a statement to ABC News. “If Republicans in Congress just sit on their hands and don’t continue the fight to repeal Obamacare, or if there’s a bad amnesty deal that rewards millions of illegal immigrants immediately while promising security reforms years later, the midterms will be a bleak prospect for Republicans.”