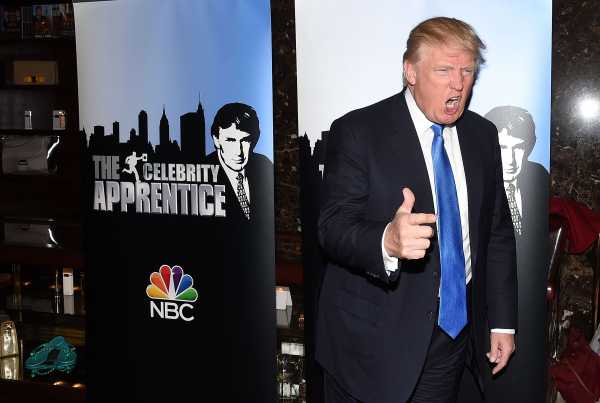 President Donald Trump is turning security clearances — and whether current and former officials get to keep them — into a reality show-style game.

Former CIA Director John Brennan was the first figure to get the ax, and the White House has put out a list of multiple other individuals who are potentially on the chopping block.

Trump is now publicly toying with going after other clearances, on Monday asking his followers on Twitter whether he should go after former CIA and FBI official Philip Mudd, who in a CNN debate criticized Trump for targeting security clearances and became angered when another commentator suggested he and others profit from their clearances. And the president seemed to dangle the matter in front of former Director of National Intelligence James Clapper on Tuesday, suggesting the retired Air Force lieutenant general is being “nice” to him so he doesn’t lose his security clearance next.

The setup isn’t all that different from a reality television scenario you could see in Big Brother, Survivor, or The Apprentice. There’s a list of potential nominees who could be ousted, and they’ve got to play the game to keep the other participants — or, in this case, Trump — from kicking them out. And we’re all watching to see who’s next.

Since Trump revoked Brennan’s clearance last week — an extraordinary move seen largely as retaliation for the former CIA director’s public criticism of him — Trump has made no secret of his desire to do more. The White House put out a list of other top intelligence and law enforcement officials whose security clearances Trump was considering revoking, including former FBI Director James Comey, former Deputy Attorney General Sally Yates, and former National Security Adviser Susan Rice. Also on the list: current Justice Department official Bruce Ohr, whom Trump has been attacking on Twitter for days.

The Washington Post reported over the weekend that the administration had already drafted more security clearance revocations, and the communications team had suggested rolling them out to change the narrative during unfavorable news cycles. According to the Post, presidential aides worried that Trump’s list would “smack of a Nixonian enemies list.” But Trump doesn’t seem to be bothered by it.

Security officials and experts are worried about what Trump is doing. He seems to see it as a game.

More than a dozen former senior intelligence officials under both Republican and Democratic administrations signed a letter supporting Brennan and called the White House’s decision to revoke his clearance “inappropriate” and “deeply regrettable.” Separately, 60 former CIA officials warned Trump that “the country will be weakened if there is a political litmus test applied before seasoned experts are allowed to share their views,” and on Monday, another 170 former officials signed a letter supporting Brennan.

Leon Panetta, a former CIA director and defense secretary, said in an interview with Margaret Brennan on CBS’s Face the Nation on Sunday that the president was using security clearances as a “political tool” to go after people he doesn’t agree with. “That undermines the importance of security clearances, particularly when it comes to national security,” he said.

The president is not picking up what the national security community is putting down. Instead, he’s continued to relish the fight over clearances and his actions.

In a tweet on Monday, he suggested that the outcry over Brennan and others is not due to national security reasons but instead because security clearances are a hot ticket. “Everybody wants to keep their Security Clearance, it’s worth great prestige and big dollars, even board seats,” he wrote.

He also said he would welcome a lawsuit Brennan has threatened to file in response to losing his security clearance, seeming excited at the idea of a reality show-like fight where a former contestant tries to get back in.

On Monday evening, Trump reacted to a segment featuring a heated debate between Mudd, the former CIA and FBI official, and pro-Trump commentator Paris Dennard over Trump revoking security clearances. The clip first aired on Friday night, but Trump appears to have just caught it on Monday when Hannity aired it on Fox.

Trump characterized Mudd as “totally unglued and weird” and asked his some 54 million Twitter followers whether they thought he should revoke his clearance. He tagged in Hannity too.

And on Tuesday morning, Trump suggested that Clapper — who’s on his list for potential clearance revocations — is “being nice to me” so the president doesn’t take action. He also batted down a New Yorker report that he considered restricting former President Barack Obama’s intelligence briefings.

This isn’t the first time Trump’s reality television roots have been evidenced in his presidency. The way he’s treated his Supreme Court picks — putting out lists, whittling down the finalists, and announcing his decisions during primetime hours — has an Apprentice-like air to it as well. If national security experts are right and the president’s game right now is indeed one, the stakes are much higher than in the Trump Tower boardroom when Trump was deciding whether to fire Omarosa.