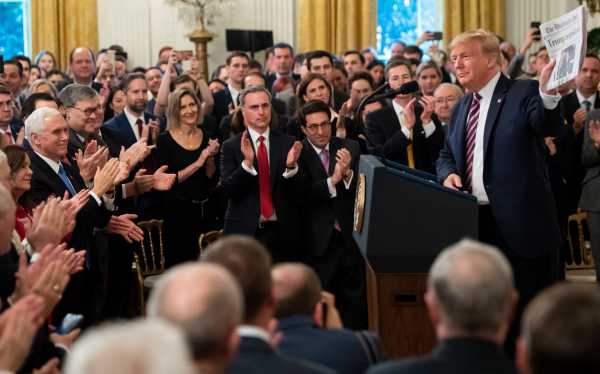 President Donald Trump has fired the intelligence community inspector general who first told Congress of the whistleblower complaint that ultimately led to Trump’s impeachment. The president informed the House and Senate intelligence committees of the firing in a letter on Friday.

Michael Atkinson, then inspector general of the intelligence community, told Congress last September about a whistleblower complaint that alleged Trump had communicated improperly with the president of Ukraine. With his firing, Atkinson becomes the latest of a series of administration officials involved in the impeachment process to be fired or reassigned.

In formal letters to the respective chairs and vice chairs of the Senate and House intelligence committees, Trump wrote that he chose to remove Atkinson from his office, effective 30 days from Friday, because he no longer has faith in the appointed official.

Trump said that he will submit a nomination for a replacement to the job, which investigates and audits the work of the national intelligence director and his staff, “at a later date.”

While the president does have the power to remove Atkinson, a number of his critics — particularly Democratic lawmakers — have argued the inspector general was removed as retribution for his role in the impeachment proceedings.

Similarly, Sen. Mark Warner — the Democratic vice chair of the Senate Intelligence Committee — said in a statement that Trump had targeted Atkinson for serving honorably.

“In the midst of a national emergency, it is unconscionable that the president is once again attempting to undermine the integrity of the intelligence community by firing yet another intelligence official simply for doing his job,” Warner said.

And in a statement, the chair of the Council of the Inspectors General on Integrity and Efficiency, Michael Horowitz, defended his colleague.

“Inspector General Atkinson is known throughout the Inspector General community for his integrity, professionalism, and commitment to the rule of law and independent oversight,” Horowitz said in a statement. “That includes his actions in handling the Ukraine whistleblower complaint, which the then Acting Director of National Intelligence stated in congressional testimony was done ‘by the book’ and consistent with the law.”

According to reporting by Politico, Atkinson himself was only informed of his firing on Friday evening, around the same time that the letters to Congress went out. According to that same reporting, Atkinson has been placed on administrative leave for the remainder of the mandated 30 days’ notice to Congress.

Trump nominated Atkinson to the inspector general position in November of 2017.

Atkinson first brought the complaint to then acting national intelligence director Joseph Maguire, after assessing it and deeming it of “urgent concern.” Maguire did not bring it to Congress within seven days, as is required by law, and instead brought the issue before the Justice Department.

So Atkinson wrote a letter to Congress, telling them about the complaint, after which a congressional investigation was opened against the president, two articles of impeachment were brought, the president was impeached, and — after a dramatic series of hearings — was ultimately acquitted.

Trump has removed nearly everyone involved in the impeachment inquiry

Throughout the impeachment process, Trump described the process as a “witch hunt” and vehemently denied he’d committed any impeachable acts.

And in the weeks since his acquittal on February 5, many officials involved in the proceedings have been fired, reassigned, or have left their posts.

Immediately after his acquittal, Trump removed Lt. Col. Alexander Vindman, a Ukraine expert who testified during the impeachment inquiry — and his twin brother, who did not — from the National Security Council. Then he fired his ambassador to the European Union, Gordon Sondland, who had been a major campaign donor and who testified that he’d helped lead a campaign to pressure Ukrainian officials to investigate the Bidens. Sondland also told the House Intelligence Committee that the Trump administration had indeed engaged in quid pro quo. In March, Trump announced his former acting chief of staff Mick Mulvaney — who told reporters Trump tried to trade Ukrainian aid for political favors — would now be the administration’s special envoy to Northern Ireland.

Other key witnesses left government. Former US Ambassador to Ukraine Marie Yovanovitch, a career diplomat who testified that she was recalled from her post because of her anti-corruption work, retired from the foreign service. Kurt Volker, the special envoy to Ukraine, resigned during the proceedings and later testified that he did not think the Bidens had behaved corruptly.

William Taylor, a diplomat who testified that Trump and his personal lawyer, Rudy Giuliani, pushed for investigations into the Bidens, and Tim Morrison, the former top Ukraine official on the National Security Council, both left government as well.

And even Maguire, the national intelligence director who did not bring the Ukraine whistleblower complaint to Congress, was removed in February, one week after his staff briefed members of Congress on Russian interference in the upcoming presidential election.

Atkinson has been targeted by the president before. In January, Trump tweeted that Atkinson was involved with Democrats in whipping up the impeachment charges against him. The New York Times reported in November that Trump was then considering firing Atkinson for being “disloyal” by bringing the whistleblower complaint to light.

By firing Atkinson late on a Friday night, Trump has indicated that, even in the midst of a global pandemic, actions taken during his months-long impeachment investigation are not far from his mind.

The unemployment rate improved in May, but left black workers behind