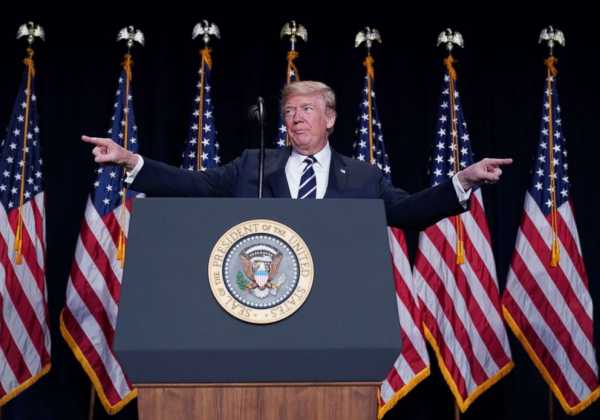 “Much work will always remain, but we will never rest until that job is completely done and we are really doing it like never before. We know that millions of people in Iran, Cuba, Venezuela and North Korea and other countries suffer under repressive and brutal regimes. America stands with all people suffering oppression and religious persecution,” Trump said.

Trump’s solemn speech also focused on Hurricanes Harvey and Irma, the wildfires out West, the Las Vegas shooting and the opioid epidemic — highlighting a story from a family he invited to attend his State of the Union address. 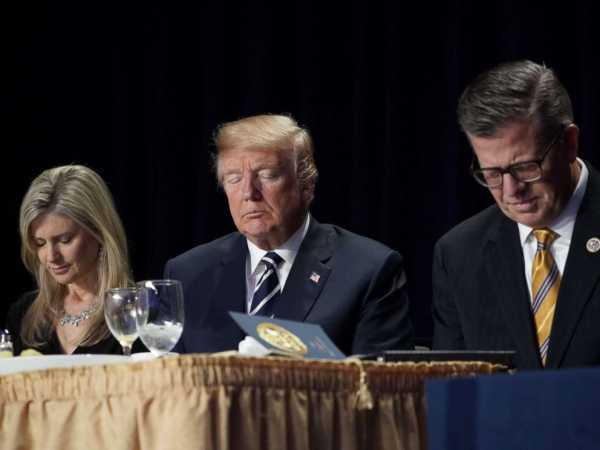 “When catastrophic hurricanes struck, first responders and everyday citizens dove into rushing waters to save stranded families from danger and they saved them by the thousands,” Trump said. “Neighbors opened their homes to those in need of food, clothes, shelter — firefighters braved blinding smoke and flames to rescue children from devastating wildfires”

And on Las Vegas, the president heralded strangers shielding strangers and police officers who ran into a “hail of bullets to save the lives of their fellow Americans.”

He also told the story of a 9-year-old girl named Sophia Marie Campa Peters. She suffers from a rare disease that caused multiple strokes, Trump said, and at one point was told she may not walk again.

“If you are only going to talk about what I can’t do, then I don’t want to hear it. Just let me try to walk,” the president said Sophia told the doctors. Before going into a recent surgery, she asked for the world to pray for her. Her request reached millions, the president said.

“And I have to say this, Sophia, you may only be nine years old but you are already a hero to all of us in this room and all over the world,” Trump said.

Last year at his first National Prayer Breakfast, Trump made headlines for bragging about his ratings on “The Apprentice” and mocking the show’s latest host, Arnold Schwarzenegger. Trump also promised to “get rid of, and totally destroy,” the Johnson Amendment, a provision in the tax code that prevents non-profits like churches from endorsing or opposing political candidates. Congress has not repealed the law.

This year’s breakfast attracted thousands of people from inside Washington — and around the world — to network and gather “in the spirit of Jesus.” But the event has been criticized for not separating church and state.

Trump announced his appearance in a tweet, adding that Mark Burnett, a Christian who has helped create programs related to that faith, is the executive producer of “The Apprentice” and is a longtime friend of Trump would be in attendance as well. White House Chief of Staff John Kelly, counselor to the President Kellyanne Conway, senior adviser Stephen Miller, Ivanka Trump and Jared Kushner joined the president at the event.

The National Prayer Breakfast, hosted by the Fellowship Foundation, has been held annually in Washington since its first gathering in 1953 with President Dwight D. Eisenhower. This year’s bipartisan event is co-chaired by Democrat Rep. Charlie Christ of Florida, and Republican Rep. Randy Hultgren of Illinois.

Other members of Congress joining the president at the Capitol Hilton in Washington included Democratic Sen. Chris Coons of Delaware and Republican Sen. James Lankford of Oklahoma, representing the U.S. Senate Breakfast Group and Prayer for Leaders and Republican Rep. Steve Scalise of Louisiana, who was shot during practice for a bipartisan Congressional baseball game and only recently came back to Capitol Hill after recovering from his injuries.

“We are so glad to have you with us today. Your presence reminds us of Jesus’ words the book of Matthew, “with God, all things are possible. You are fantastic. You really are,” said Trump to Scalise.

“This year, the annual National Prayer Breakfast will be attended by more than 3,800 individuals representing over 130 countries and territories around the world,” said A. Larry Ross, a spokesman for the Fellowship Foundation. “Approximately 55 are coming from Russia, including a group of 35 young professionals – millennial doctors, lawyers and business leaders in their 20s and 30s – invited out of a context of relationship and faith.”

Trump has held strong approval ratings among people who identify as evangelical Christian. In January, Trump delivered the keynote address at the annual anti-abortion March for Life in Washington, D.C.