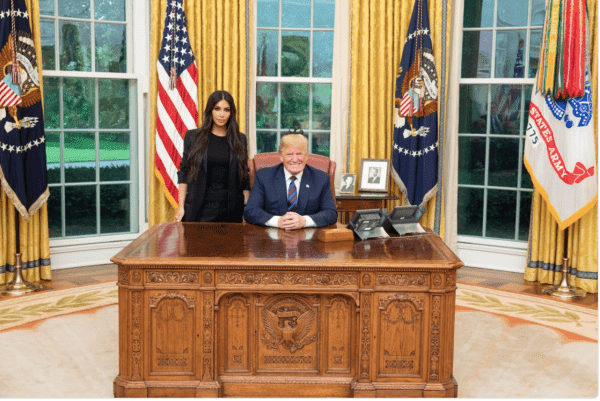 On Wednesday, President Trump commuted the sentence of Alice Marie Johnson, a 63-year-old great-grandmother who was serving a life sentence in prison for drug trafficking.

He made the decision after meeting with reality TV star and entrepreneur Kim Kardashian West, who visited the White House on May 30 to advocate for Johnson’s case. Johnson led a cocaine ring in the early 1990s and was sentenced to life in prison in 1996.

Kardashian learned about Johnson’s case last fall after seeing a Mic video about the woman, and had worked with lawyers to press for Johnson’s release. The commutation does not erase the crime from Johnson’s record, but it allows her to leave prison immediately. On Thursday, Johnson told Today that her release was a “miracle,” noting that she had unsuccessfully applied for clemency several times.

The president’s move to commute Johnson’s sentence seems to be at least somewhat motivated by who asked for it — according to Bloomberg, Trump reportedly told Kardashian that she and her husband, Kanye West, were helping him with black voters, a reference to an April poll that saw Trump’s approval rating increase among a small number of African Americans. Trump’s touting of the poll is somewhat misleading, as the sample of African Americans used in the poll is too small to mean anything.

As my colleague German Lopez notes, Johnson’s case stands out due to the Trump administration’s stance on incarceration; the president has argued that the US, which locks people up at a higher rate than many countries, needs to actually enact stricter penalties for offenders.

In the past, Trump has saved some of his strongest rhetoric for drug dealers, at one point calling for them to face the death penalty. And though the president was willing to release Johnson, there are hundreds of people who have been incarcerated for life in the federal prison system for drug offenses who likely won’t be so fortunate.

The most recent federal data shows that nearly 48 percent of people in the federal prison system are incarcerated for drug offenses, compared to roughly 10 to 15 percent at the state level. The criminal justice reform group the Sentencing Project notes that as of 2016, some 1,907 federal inmates were serving life sentences for drug offenses. Another 103 people were serving what the group terms “virtual life sentences,” or sentences that are long enough to virtually guarantee that someone dies in prison. Together, these two figures accounted for roughly 30 percent of all federal prisoners serving life in prison in 2016, according to the Washington Post.

It’s a system that overwhelmingly affects people of color. While black communities use and sell drugs at rates similar to whites, they are much more likely to be arrested and incarcerated for it, and often get longer sentences.

A 2017 report from the US Sentencing Commission found that in the 2011-2016 period, black men received federal sentences for drug trafficking that were nearly 18 percent longer than white men in similar situations. 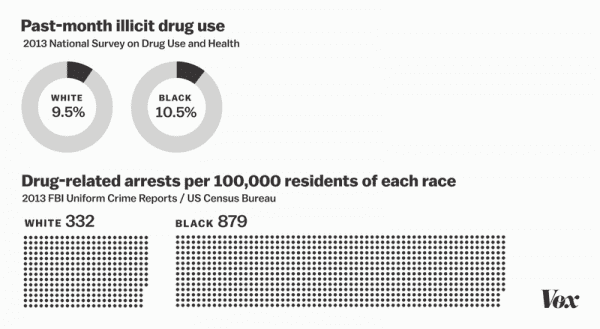 In addition to that, a 2013 report from the American Civil Liberties Union that looked at 3,278 prisoners serving life without parole for nonviolent drug or property crimes found that roughly 79 percent were sentenced to life in prison for nonviolent drug crimes. It also found that there was racial disparity in who received those sentences. “Blacks are sentenced to life without parole for nonviolent offenses at rates that suggest unequal treatment and that cannot be explained by white and Black defendants’ differential involvement in crime alone,” the report notes.

Trump himself seems to be pushing for more severe sentences for drug offenders. In 2017, Attorney General Jeff Sessions directed federal prosecutors to pursue the most serious charges when dealing with cases including those involving low-level drug offenders, and has incorrectly argued that crime is increasing due to efforts to reduce prison sentences.

And while Trump has tasked his son-in-law Jared Kushner with developing proposals for prison reform, Kushner’s main policy proposal largely ignores reducing lengthy prison sentences in favor of encouraging prisoners to rehabilitate themselves while incarcerated.

It’s worth pointing out here that while sentences for drug offenses are heavily criticized by criminal justice advocates for putting people in prison for far too long, they aren’t the main driver of mass incarceration, and the size of the federal prison system pales in comparison to the state level.

Still, because the president’s pardon and commutation power is limited to the federal level, the federal prison system is where Trump has a particularly strong influence. And while he has helped Johnson, he wants to pursue policies that are unlikely to help others like her, and may in fact push more people into a similar position.