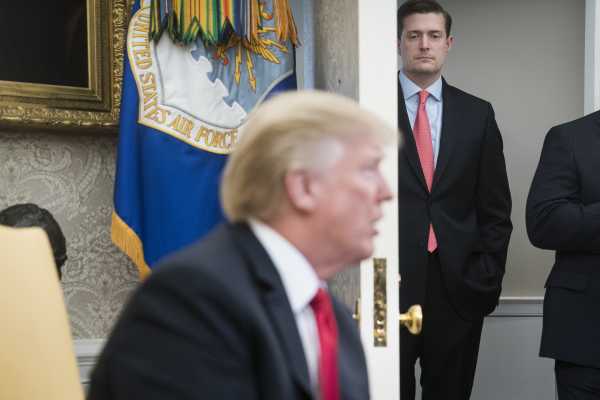 had to protect Rob Porter to save Donald Trump />

White House counsel Don McGahn knew a year ago that Rob Porter’s two former wives were preparing to testify to the FBI that he had abused them. White House Chief of Staff John Kelly knew about the domestic abuse allegations as early as November 2017. Other powerful administration figures may have been aware earlier than that.

No one took action.

Porter resigned this week as the allegations become public, including a photo of one of his wives with a black eye. But the White House defended him again and again, and President Trump told reporters today that Porter has claimed to be innocent and “will have a great career ahead of him.”

The White House’s inaction — and recent defense of Porter — bring to light a major conflict within the conservative movement in the age of Trump. While House Speaker Paul Ryan touts his support for bipartisan legislation to end harassment and misconduct committed by members of Congress, and other Republicans make changes within their own offices, the Trump White House is not even paying lip service to reform.

For the White House, the politics are simple: Protect Trump. Because Trump himself is accused of assaulting dozens of women, they’ve had to lower the bar for male behavior so that even he can meet it. Any allegation of misconduct made against anyone close to Trump, then, must be dismissed as if it were being made against Trump himself.

As Elisha Krauss, a conservative podcast host and former producer for The Sean Hannity Show put it in an interview: “I knew that the GOP would protect Trump, no matter what — even when he said or did things that violate basic principles of proper conduct.”

The Trump administration has continually touted its bona fides as a champion of women in the workplace and in society, even as Trump himself has reckoned with allegations of sexual misconduct over multiple decades.

And Chief of Staff Kelly has paid lip service to the notion that women should be safe at work and at home. During a White House press conference in October, he lamented changing cultural norms that, in his view, put women at risk. “When I was a kid growing up, a lot of things were sacred in our country. Women were sacred and looked upon with great honor.”

But in the case of Porter, the White House did the opposite. The administration not only admitted someone accused of domestic abuse into its ranks but protected him while knowing he would be denied a security clearance. They continued to give him high-level jobs. He traveled with the president internationally, presented him with confidential documents, and helped write Trump’s first State of the Union — all while lacking a permanent security clearance because of the allegations against him, a fact known to those tasked with some of the most important jobs in the White House.

And the White House was even unable to keep its story straight once the allegations became public, with Kelly and Sen. Orrin Hatch, Porter’s former boss, launching spirited defenses of a man credibly accused of violence against multiple women.

Krauss, a conservative, is frustrated. The administration has “seen women like Nikki Haley, Sarah Sanders, Betsy DeVos, and more gain a lot of power and influence” — but she said the administration’s need to protect Trump at all costs was outweighing almost anything else, including the safety of women.

Krauss said that that attitude may have directly contributed to why the White House continued to support Porter again and again and again. “My fear is that Kelly or other senior officials were aware [of the allegations], but that their uncompromising, ‘We must fight!’ attitude made them see attacks on Porter as just another example of Democrats, or the establishment, or the media, attacking Donald Trump from yet another angle.”

As much as the current dynamics are about Trump, there is precedent inside the conservative movement for conflict over domestic violence.

Back in 2013, conservative Republicans fought an expansion of the Violence Against Women Act (VAWA) that expanded domestic violence protections to same-sex couples and undocumented immigrants and continued controversial “mandatory arrest” policies. At the time, conservatives like then-Sen. Jeff Sessions said that he wanted to speak out against domestic violence, but that he felt the new provisions in the legislation “almost seem[ed] to invite opposition.”

In 2018, the debate over domestic violence among conservatives is playing out as the party stays hell-bent on protecting their president at all costs. Now, conservative women are asking why the White House seems more than happy to tout its record on hiring women and yet appears markedly uninterested in stopping abuse allegedly committed by members of White House staff.

“The message, over and over, from Trump and his team around him, is that these issues are not important,” said Sarah Rumpf, a conservative commentator and contributor to RedState.com. Pointing to incidents ranging from allegations against former Trump campaign manager Corey Lewandowski to the White House’s support of Roy Moore, Rumpf said, “[Members of this White House] do not think that mistreating women is a problem. The attitude is, do the job we need you to do, and we won’t worry about little distractions in your personal life.”

“The Republicans currently in power are fine sending a message that they do not care about sexual predators and abusers,” she said. She added that the GOP seemed to be “fine if I am harassed or abused, as long as the guy doing it is on their team.”

Amanda Carpenter, a former senior communications adviser to Sen. Ted Cruz, took it even further on CNN, saying that protecting Trump — and, in effect, men who abuse women in general — is a “job qualification to work in this White House.”

To protect Trump from any questions about his own past sexual misconduct and behavior toward women, the White House “circle[ed] the wagons around an alleged serial abuser,” as conservative columnist Noah Rothman put it.

The administration looked away from Porter’s security clearance problem, aware that Porter’s past made him a massive security risk. Instead, they permitted him to remain a high-level member of White House staff.

It did this because this administration is built to defend Donald Trump, the same Donald Trump who told Access Hollywood’s Billy Bush that “when you’re a star,” you can do whatever you want to women — “grab ’em by the pussy. You can do anything.” To the horror of many conservatives, that ethos, and moreover, the need to protect Trump from himself and his own behavior toward women at all costs, appears to now be the official doctrine of the White House.

In a 1994 interview, ABC News’s Nancy Collins confronted Trump about his past comments regarding women, particularly a New York magazine interview in which he said, “You have to treat women like shit.” In response, Trump said: