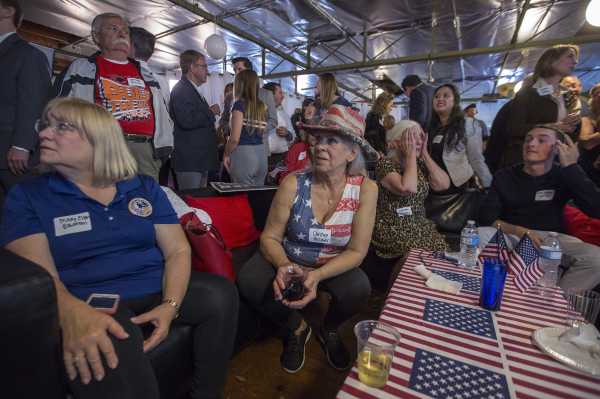 Democratic optimism about the 2018 midterms reached crescendo levels this winter after improbable wins in special elections in Alabama and western Pennsylvania. Liberals began to predict a “blue wave” — a sweeping series of electoral victories comparable to the GOP’s 2010 successes — that would vindicate the resistance and check Donald Trump’s power.

But now Trump’s approval ratings are ticking up. The “generic ballot” polls are tightening. And Senate races across the country are shaping up to be much more competitive than Democrats had hoped in states like West Virginia, North Dakota, and Indiana. Even safer-looking Democratic senators like Bill Nelson in Florida and Sherrod Brown in Ohio are facing extremely well-funded opponents with solid statewide name recognition.

The question for many liberals, then, is: Did the wave peak too soon only to dissipate in the face of a strengthening economy?

Though it feels like the odds for liberals have gone from overwhelmingly positive to desperate quickly, the reality is a bit duller. As a country, we have, in many ways, failed to process some of the key lessons of the 2016 campaign. Modest-size polling errors are common; events are important to politics, and they are inherently unpredictable. But Democrats retain an edge in the polls, and the results from California continue to suggest that Democrats are modest favorites to win a House majority.

Back in the final week of 2017, Democrats held a generic ballot polling advantage that averaged 13 points or more. The numbers have bounced up and down since then, but the general trend has been in Republicans’ favor; Democrats now have an advantage of roughly 5.5 points.

This narrowing has been happening for some time and is not a sudden news event. Two months ago, for example, Democrats were 8 points ahead — meaningfully better than their current numbers but also far worse than the December numbers. It’s worth saying that by the time of Conor Lamb’s surprise victory in the PA-18 special election, the Democratic lead was already down to “only” 8.5 points. Most of the narrowing, in other words, happened before Democrats’ most impressive special election victory rather than representing a recent deterioration.

A glance at Trump’s approval ratings, however, does make it clear that the shift in the news environment since 2017 has been advantageous to his cause.

Back in 2017, there was a lot of scandal news and coverage of Trump antics, but there was also intensive coverage of ongoing congressional debates on health care and taxes where Republicans took unpopular positions. That unpopularity helped contribute to Doug Jones winning a special election in Alabama in December. Jones’s victory, combined with John McCain’s poor health, have largely prevented Republicans from advancing a contentious legislative agenda in 2018.

Interestingly, Democrats’ odds of capturing the House have not declined nearly as much since November as their poll numbers.

G. Elliott Morris’s statistical model, for example, gives Democrats a 63 percent chance of taking the House in November, which is down only about 4 or 5 points from its high. Gamblers are a bit more pessimistic than Morris (whose model believes, based on history, that the opposition party is more likely to gain in the polls than decline) but similarly see a fairly modest change.

The other really significant factor is the change in Pennsylvania’s congressional map from one highly gerrymandered to favor the GOP to one that’s about proportional in its partisan lean. The overall map still has a strong pro-Republican tilt, but Pennsylvania is a big state. That change meaningfully altered the overall slant in a way that’s boosted Democrats’ fortunes.

Similarly, while final results are not yet in from California, the votes counted so far strongly suggest Democrats successfully avoided getting locked out of the general election by the Golden State’s weird “top two” primary system, greatly improving their odds of winning some of these seats in November.

Democrats can also take solace in the fact that recent election outcomes have been better for their party than the polls.

Some extra reasons for Democratic optimism (or wishful thinking)

You may recall that last November, there was an extraordinary level of hand-wringing in Democratic circles about Ralph Northam’s extremely narrow polling lead over GOP nominee Ed Gillespie. Was the party about to blow it again, but this time in a clearly blue-leaning state where Donald Trump fared poorly in 2016?

Northam didn’t beat Gillespie narrowly, as the polls suggested he would — he beat him solidly. And Democrats picked up a ton of House of Delegates seats. Phil Murphy romped to victory in New Jersey as well. And then in the Alabama special election, Doug Jones outperformed his poll numbers, winning narrowly when the polls said he would lose narrowly.

After polls moderately overrated Democrats in the 2016 and 2014 cycles, people with short memories grew accustomed to the idea that maybe pollsters systematically underrate the GOP. But in the 2012 cycle, polling error favored Republicans. And so far in the Trump era, the same has been true with Democrats, who are performing, on average, 2.3 points better than their polling.

By the same token, we haven’t yet had much polling that focuses on the question of who is likely to vote in 2018. But the evidence we have so far suggests that Democrats will have a turnout advantage.

Some of this is psychological, with the “out” party naturally more motivated to vote in the midterms. But some of it is demographic. Trump has made the GOP more popular with working-class white voters but less popular with white college-educated professionals. That’s a geographically efficient swap in terms of the Electoral College, giving up useless or superfluous votes in Texas and California in exchange for valuable ones in Michigan and Pennsylvania. But it’s a bad deal in terms of turnout, since educated voters have a higher propensity to vote than working-class ones.

Of course, this all may be no more than wishful thinking. At the end of the day, the most important thing to know about the November midterms is that they won’t be happening until November. Events in the rest of the summer and fall will likely change things, and it’s perhaps not productive to spend too much time worrying about the inherently unpredictable nature of events when we can actually speak more authoritatively about the policy stakes.

A little rant about the “wave” metaphor

It’s become common in recent years to speak about certain elections — 2006 for the Democrats, 2010 for Republicans — as representing metaphorical “waves.” A lot of 2018 commentary has ended up focusing on this metaphor.

That, in turn, has tended to devolve into a kind of semantic quibbling over what a wave is. If Democrats secure a narrow one-seat majority in the House, is that really a wave? Does it matter that due to gerrymandering, securing a narrow majority would almost certainly entail a large 6- or 7-point win in the popular vote? If Democrats carry the popular vote by 5 points and pick up 22 House seats and one Senate seat despite a very unfavorable map, is that a non-wave just because it would leave the GOP in possession of razor-thin majorities in both bodies?

Amy Walter of the Cook Political Report says that wave-ness (or lack thereof) actually has nothing to do with the magnitude of the electoral win.

These complexities suggest that we have reached a point in history where the metaphor is doing more to induce confusion than to explicate things. There is a sense in which the 2016 election was a “wave” for Republicans; they systematically overperformed their polls, narrowly prevailing in both a presidential election and Senate races in Pennsylvania and Wisconsin that they seemed poised to lose.

And there’s a sense in which it very much wasn’t. After all, Trump lost the popular vote by 2 points and the GOP lost two Senate seats and a half-dozen House seats.

What really matters about 2016, however, is that Trump became president, and the GOP’s congressional majorities, though diminished, were sufficient to enact a passel of legislation and to largely shield the Trump administration from oversight.

There’s a lot on the line in November

It’s impossible to say for sure what the policy consequences of different midterm outcomes will be, but we can genuinely predict this with a good deal more certainty than we can forecast election outcomes.

If Republicans stay in control of the House and gain ground in the Senate, they will almost certainly make further attempts to chip away at the Affordable Care Act and/or Medicaid. And they will keep pushing for something along the lines of the nutrition assistance cuts that were in the House farm bill.

Democrats, conversely, will use even a very narrow majority to try to aggressively investigate Trump administration scandals while trying to force the administration to moderate its course on immigration and health care.

A Senate that continues in Republican hands will keep confirming federal judges at a record pace and substantially reshape the federal judiciary, whereas a Democratic-held Senate will slow confirmations down and force compromises on some key selections.

Details are unpredictable, but the basic shape of policy change isn’t. By the same token, though we don’t know exactly who will win in November, we do know that the House will be closely divided and Democrats will either gain or lose a seat or two on net in the Senate.

We also know that even though 220 seats and 216 seats are similar numbers, the difference between a small majority and a large minority is very consequential in somewhat predictable ways. And people would almost certainly be better off spending time debating those differences’ pros and cons than speculating about the odds.