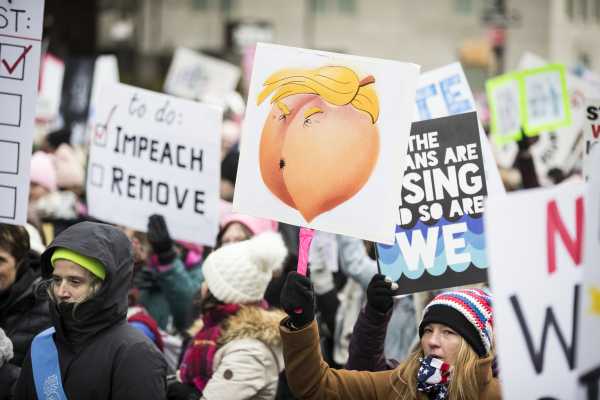 Ahead of President Donald Trump’s impeachment trial in the Senate, a new poll finds Americans remain split on whether the president ought to be removed from office — with a very slight majority, 51 percent, saying he should be removed.

That national poll, conducted by SSRS for CNN and released Monday, found little change in opinion on the matter of impeachment and removal. In November, as the impeachment inquiry was in full swing, the same survey found 50 percent of Americans advocating for Trump’s impeachment and removal. That number dipped slightly in SSRS’s December survey, to 45 percent, before rebounding to where it currently stands.

An analysis by Gallup’s pollsters released Tuesday suggests why both the results of the Marist and SSRS polls reflect an almost even split: Trump had the best year of his presidency in 2019 as far as approval ratings go, averaging 42 percent — a number powered by incredibly high Republican support (89 percent — very near the fictional 95 percent approval rating Trump often boasts about) and weighed down by historically low Democratic support (7 percent).

Other polls have found similar results — as seen in 538’s polling average — although Gallup noted a stronger increase in support as the year went on. This being said, the 82 percentage point difference between Republicans’ and Democrats’ approval of the president is the highest approval gap Gallup has ever recorded.

And this deep polarization is reflected in how the public feels about impeachment.

A 538 meta-analysis of impeachment polling has found that, as of January 20, 84 percent of Democrats want Trump removed from office, but only 7.8 percent of Republicans feel the same. Americans who identify as independents reflect the split SSRS found of all Americans — 43 percent said they support removal.

This partisan split was reflected in the Marist poll’s questions about Trump’s behavior as well: 88 percent of Democrats said Trump is encouraging election interference; 13 percent of Republicans and 51 percent of independents said the same.

SSRS did not break its findings down along party lines, but it did find a very neat divide in attitudes about how Republicans and Democrats are handling the impeachment trial.

House Democrats had hoped the impeachment inquiry — and the witness testimony it included — would help sway public opinion in favor of impeachment. But one month after Trump was impeached by the House, it is clear that hasn’t happened.

Congressional Democrats do seem to have done a better job convincing the public than Republicans did during President Bill Clinton’s impeachment proceedings, however. Ahead of his trial, 68 percent of Americans told the New York Times/CBS News senators shouldn’t remove him, a number similar to a CNN/USA Today/Gallup poll taken just after the trial began that found two-thirds of Americans against removal.

But they have not been able to create overwhelming public pressure on Republican senators to at least consider Trump’s removal. And that has allowed GOP lawmakers to feel comfortable with making statements about their plans to approach the trial from a partisan point of view. Senate Majority Leader Mitch McConnell, for instance, has said, “I’m not an impartial juror. … The House made a partisan political decision to impeach. I would anticipate we will have a largely partisan outcome in the Senate.”

Although the oath all senators swore to do “impartial justice” last week would seem to be at odds with this stance, the polarization reflected in polling would suggest that senators — Republican or Democrat — will face little backlash (and could even be rewarded) for clearly partisan behavior during the trial. And that has made the results of the trial feel like a foregone conclusion.

Americans are largely united in their desire to hear from witnesses

There is one part of the trial that does seem to have some bipartisan support among Americans: whether the proceedings should include witnesses. The new SSRS poll found 69 percent of respondents said the trial should include new witness testimony.

Republicans have floated calling former Vice President Joe Biden’s son, Hunter. And in recent days, Trump’s personal lawyer Rudy Giuliani has begun saying he would like to be called as a witness for the president.

But Republicans have signaled little desire to invite new witnesses, with McConnell reportedly privately opposing calling anyone new, and Trump ally Sen. Lindsey Graham saying Democrats “had a chance to call witnesses” in the House, and that they “chose not to because they were in such a rush” — arguing Democrats should have entered what was sure to be a lengthy legal battle challenging Trump’s direction that top officials not testify.

House Speaker Nancy Pelosi has pointed to polling like SSRS’s most recent work in advocating for having new witnesses at the trial. Citing a Washington Post/ABC News poll on ABC’s This Week in mid-January, Pelosi said, “Over 70 percent of the American people think that the president should have those witnesses testify.”

As Vox’s Li Zhou has reported, some Republicans are indeed feeling this pressure, with members of the caucus who have been critical of how impeachment has been handled so far stating publicly that they’d like to hear from witnesses. Sen. Mitt Romney, for instance, has said he’d like to hear from Bolton; and Sens. Lisa Murkowski, Susan Collins, and Lamar Alexander have signaled some openness to hearing from witnesses as well.

Facing this pressure, McConnell arranged a sort of compromise, announcing the Senate would proceed under a framework modeled on the Clinton impeachment trial: first senators would hear arguments, then be allowed to ask questions, and then there will be a vote on whether witnesses will be called.

Democrats need only four Republican votes to subpoena witnesses, but it remains to be seen whether the Republicans who have publicly advocated for witness testimony will actually be willing to cast votes to make that testimony happen. And even if they do, Democrats might be forced to accept allowing Republicans to call witnesses as well, like Giuliani, or even former Vice President Joe Biden himself.