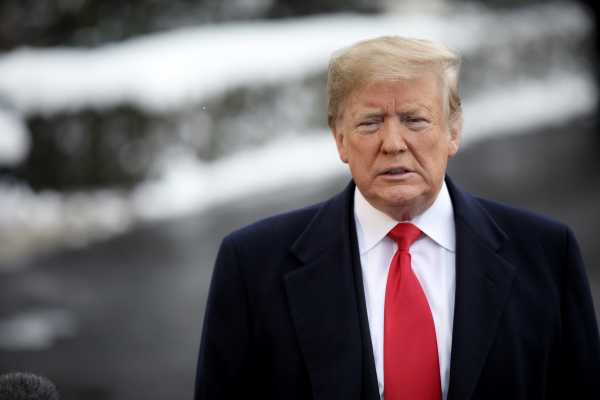 The government is opening again. After a more than month-long standoff over funding for a southern border wall, in the end, President Trump agreed to fund the government — for now — without any additional wall funding.

Congress is expected to pass a short-term spending bill to open the government for three weeks, without any additional funding for a wall and with the presumption that Democrats and Republicans will use the time to come to an agreement on border security. This has been Democrats’ position on the shutdown all along.

Trump did his best to save face in a press conference on Friday in the White House Rose Garden. “I am very proud to announce today that we have reached a deal to end the shutdown and reopen the federal government. As everyone knows, I have a very powerful alternative but I didn’t want to use it at this time. Hopefully it will be unnecessary,” he said, seemingly threatening a national emergency if Congress doesn’t give him what he wants in the coming weeks.

This has been the longest government shutdown in US history and the third government shutdown to start under a fully Republican-controlled government. Congress let funding for nine federal departments making up roughly 25 percent of the federal government expire on December 21, including the departments of Justice, State, Transportation and, most contentiously, Homeland Security, which has purview over construction on the southern border. The impasse was over Trump’s demand for $5 billion in border wall funding — which Democrats refused to agree to.

But the effects of the government shutdown grew too big to ignore; roughly 800,000 federal employees were impacted, many of whom were told they had to work without pay. By Friday, a shortage of air traffic controllers had made it too dangerous for airlines to fly some commercial flights. National parks were going without maintenance, and the shutdown was taking a serious toll on the nation’s economic growth. In other words, the cost of Trump’s fight for the border wall was much, much greater than the $5 billion he was asking for — and the American public was overwhelmingly blaming Trump for it.

With the government soon to be reopened, those federal workers will return to work and salaried employees will receive back pay (contract and hourly employees, at least so far, aren’t so lucky). But the fight over the wall is far from clear-cut, and neither Republicans nor Democrats can articulate what it is exactly that they are sparring over. Congress has failed to reach a deal on immigration policy under Trump before. Now they have another deadline.

Now comes a much tougher fight over a “wall”

The impasse all came down to a campaign promise Trump made three years ago to build a “big, beautiful wall” on the US-Mexico border; specifically, Trump wants $5 billion — a “down payment” — to begin construction on some kind of physical barrier on the southern border.

Trump has made “the wall” mean many things since entering office. On the 2016 campaign trail, it quite literally meant a 50-foot-high concrete wall along the 2,000-mile border. Over the past two years, the wall has become “see-through” and perhaps less contiguous (there are canyons and rivers, after all). In the past several months, Trump has called for “steel slats” or “concrete.” He doesn’t care what Democrats call the physical barrier. To him, it’s all a wall.

But as Trump agreed to reopen the government, he sang a different tune: “We do not need 2,000 miles of concrete wall from sea to shining sea, we never did, we never proposed that, we never wanted that because we have barriers at the border where our natural structures are as good as anything we can build. They’re already there. They’ve been there for millions of years,” Trump said on Friday.

When Trump talks about physical barriers, Democrats hear a lot more than just the material that barrier is made of.

“It’s a political gimmick, and we shouldn’t justify it,” Rep. Scott Peters (D-CA), who represents the border region in San Diego, told Vox during the shutdown. “The wall is more of a symbol instead of a structure. It is a symbol of racism. The message is still a racist dog whistle. It’s not a wall.”

The government may be open for three weeks, but the political incentives in this fight haven’t changed. The border wall is popular with Trump’s base, which is a large part of why he’s adamant about fighting for it. But it isn’t popular overall — and neither is shutting down the government over the wall, even with Republican lawmakers.

Core to this fight is the reality that the deadlock has moved past just border security policy. This is about politics. Funding the border wall is as much a personal victory for Trump as blocking funding for the wall is for Democrats. The political incentives to compromise are slim, and three weeks is unlikely to change that.