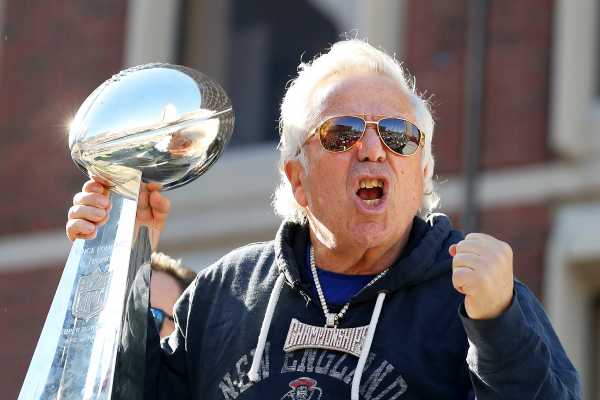 New England Patriots owner Robert Kraft has been charged with misdemeanor solicitation of prostitution in connection with a Florida spa with potential ties to human trafficking.

The Patriots are one of the most hated teams in American sports, fresh off another Super Bowl win, and Kraft has a long friendship with President Donald Trump, making this a major news story for sports fans and political junkies alike.

Kraft is among some two dozen individuals being charged by police in Jupiter, Florida. Orchids of Asia Day Spa in Jupiter is part of a months-long investigation into spas and paid sex in the area, according to the local outlet TCPalm. Investigators allege that women there and in multiple other spas that have been shut down were involved in “sexual servitude.”

The Associated Press reports that about 200 arrests warrants have been issued in recent days. The alleged human trafficking ring involved reportedly has connections to China and New York, and officials are seizing more $2 million in assets as part of the investigation.

Police appear to have secretly taped the happenings inside the massage parlors. Kraft was reportedly captured on surveillance video engaging in a sex act with an employee at the spa.

Kraft denied through a spokesperson that he engaged in any illegal activity; the spokesperson added that because this is a judicial matter, there won’t be further comments.

News like this about any billionaire would be a big deal. With Kraft, it’s probably even bigger.

News of the charges against Kraft quickly swept across the airwaves and the internet on Friday. Even Jupiter Police Chief Daniel Kerr expressed dismay at the developments.

“We’re as equally as stunned as everyone else,” Kerr told reporters.

Kraft, 77, bought the Patriots in 1994 for $172 million. According to Forbes, the team is now worth $3.7 billion and is the second most valuable football team. Kraft himself has an estimated net worth of $6.6 billion. He is a widower; his wife, Myra Hiatt Kraft, died in 2011. The AP reports that he has been dating 39-year-old actress Ricki Noel Lander since 2012.

While the Patriots, who won the Super Bowl earlier this month against the Los Angeles Rams, have built maybe the most impressive dynasty in professional sports, they have also become the biggest villain in the biggest sports league in America.

Vox’s Aja Romano recently laid out the reasons for the widespread Patriot hate, and there are a lot of them, including that Boston sports fans are notoriously obnoxious and that fans from other cities are jealous because the Patriots win a lot. They’ve won six Super Bowl championships, including three of the past five. The other Boston teams — baseball’s Red Sox, basketball’s Celtics, hockey’s Bruins — are also consistent contenders and champions, which just adds to the animosity other parts of the country feels for Boston sports. And the Patriots are the city’s standard-bearers.

They also get accused of cheating, a lot. There was 2015’s Deflategate, in which Brady and the team’s staff were accused of using deflated footballs, making them easier to control; it ended with a four-game suspension for Brady. It goes all the way back to 2007’s Spygate, when Patriots coach Bill Belichick had staff illegally videotape the hand signals of other teams.

So you have perennial winners with some apparently lax ethics. That would be enough to turn on the schadenfreude when Friday’s news broke. But Kraft and his football team also have the somewhat dubious distinction of being favorites of Donald Trump’s.

Patriots star quarterback Tom Brady and Kraft also have a long history of being chummy with the president, as Romano lays out:

On the campaign trail in 2016, Trump read a letter from Belichick congratulating him on a “tremendous campaign” and telling him he had “dealt with an unbelievable slanted and negative media, and [had] come out beautifully.” Belichick later said that the pair had been friends for “many years” and that the letter was not politically motivated.

Trump often publicly praises the Patriots and their victories as well. The 2017 Super Bowl between Atlanta and New England, between a mostly black city and the MAGA-anointed New Englanders, took on a uniquely political vibe, especially after Trump insulted civil rights icon Rep. John Lewis (D-GA) shortly before the game. (The Patriots won with a historic 25-point comeback, salt in the wounds for their non-fans.)

In reaction to the news about Kraft on Friday, the president told reporters he was “surprised” at the charges and pointed out that Kraft “denies it,” a line typical of Trump in circumstances where powerful men face allegations of bad behavior.

All that backstory gave Kraft’s enemies plenty of fodder after news of the charges broke — so there was a lot of celebrating on Twitter.

As Christian D’Andrea at SB Nation explained, the allegations against Kraft could get him into hot water with the NFL and will likely lead to a suspension and sizable fine. The last NFL team owner to be disciplined was Indianapolis Colts owner Jim Irsay, who was arrested on suspicion of a DUI and drug possession in 2014. He got a six-game suspension and a $500,000 fine.

The NFL said in a statement that the league is “aware of the ongoing law enforcement matter and will continue to monitor developments.”

There’s probably a lot more coming here, and not just about Kraft

While Kraft’s storyline may be the most sensational aspect of all this, authorities say there is a lot more to come out of this broader investigation.

On the heels of separate arrests related to the same investigation earlier this week, Martin County, Florida, Sheriff William Snyder said that “dozens and dozens” of arrests were yet to come and the information already available to the public is “the tip of the iceberg.”

“They were cooking on the back steps of the business. These women were sleeping in massage parlors, on the massage tables and had no access to transportation,” said Synder, according to the local outlet WPTV, adding that the victims were averaging eight clients a day. “If you do the math, that is about 1,500 men a year, with no days off.”

ESPN reporter Adam Schefter said in a radio interview on Friday that he had been told Kraft “is not the biggest name involved” in the investigation. “This story is going to heat up and get a lot worse,” he said. “And I don’t mean involving Robert Kraft, I’m talking about with all of the human trafficking that has gone on down there.”