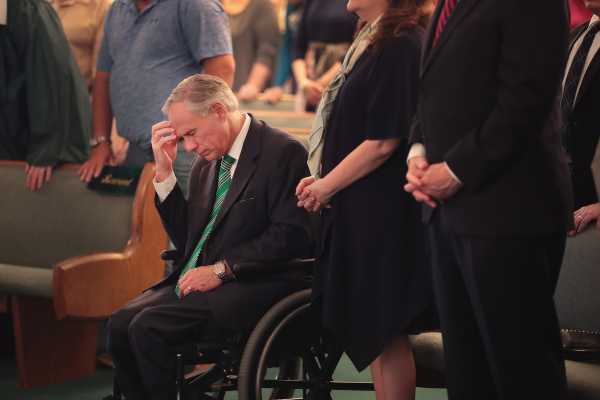 Is this time different?

It’s a question commonly asked after a mass shooting in America. After the Santa Fe High School shooting in Texas, that question is popping up once again. This time, the hope is that Texas Gov. Greg Abbott (R) — who’s now hosting discussions about how to address gun violence — will walk back some of his previous ardent support for gun rights and pass some sort of gun control legislation.

It’s too early to say where these discussions will go. But if I had to bet, I’d say that there’s almost no chance the governor who until recently touted a “shotgun giveaway” on his website is going to take any major action on firearms. And even if he wanted to, the state’s Republican-dominated and very gun-friendly legislature is extremely unlikely to budge on the issue.

And chances are that nothing big will happen anytime soon in Congress. Federal lawmakers couldn’t get anything done when a Democrat was in the White House and after first-graders were killed at Sandy Hook Elementary School in Newtown, Connecticut. It’s unlikely that they’ll take major action with a Republican in the White House and priorities in the GOP-controlled House and Senate remaining elsewhere.

But that doesn’t mean the case for gun control is totally hopeless.

In the aftermath of these tragedies, the media and public — including, I have to admit, me — tend to take a very narrow view of whether gun control will win. Much of the rhetoric focuses on whether Congress will pass something now or in the next few weeks or months.

There’s some good reason for that. In the aftermath of mass shootings, support for gun control tends to spike. So these windows of higher support are seen as perhaps the best chance to pass significant legislation regarding firearms.

But this may be the wrong way to look at the issue. Most issues in American politics are not suddenly worked out overnight. Change in the US tends to happen incrementally — steadily rising support, followed by some changes here and there. Only in rare situations is there a big, sudden breakthrough.

So it’s perhaps more important to focus on the incremental gains gun control advocates can make. And there’s a good case that this is exactly what’s working right now, even if progress feels very slow or even stalled in the moment.

Public opinion on guns is shifting

Much of the focus on public opinion about guns tends to focus on what the public says in the immediate aftermath of a mass shooting. For example, after the Parkland, Florida, high school shooting, NPR ran a headline noting that “After Parkland, Number of Americans Who Want Gun Restrictions Grows.”

But I think there’s a more important public opinion shift beyond the immediate aftermath of a mass shooting — one that looks at the longer term.

Civiqs, a progressive pollster, has been tracking public support for gun control for the past few years. It has found, as is to be expected, that support for stricter gun laws increases after a mass shooting and then begins to drop over time. But its data also shows a crucial trend: Over the past few years, some of the increase in support after mass shootings has stuck. So Americans are slowly but surely moving toward supporting stricter gun laws.

Gallup’s data tells a similar story. Although public opinion on guns tends to fluctuate, over the past few years, the trendline has been toward more support for stricter gun laws. 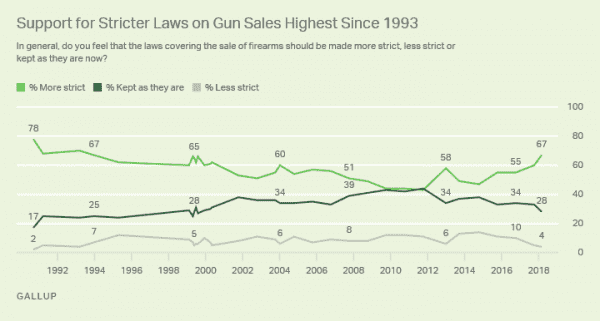 Now, as Gallup’s polling shows, this could reverse at any moment. Throughout the 1990s and 2000s, for example, support for more gun control dropped steadily. But at least over the past few years — after 2012, when the Sandy Hook shooting happened — support has steadily increased.

One remaining question with these polls is the passion gap. Other surveys show that while most Americans favor stricter gun laws, the side that opposes gun control tends to be much more passionate about the issue. The National Rifle Association member who makes guns the only issue he’ll vote on has historically been much more common than the #NeverAgain activist who only votes on guns. That may be changing with March for Our Lives and related movements fostering a new source of passion for gun control supporters, but it remains to be seen.

Gun control advocates seem aware of this. In a meeting with reporters shortly after the Parkland shooting, Everytown for Gun Safety president John Feinblatt repeatedly told us that his organization sees Congress as the end goal — a place Everytown will get to after years of smaller wins around the country.

Right now the organization is working on changes in all sorts of states — netting some major victories in recent months in gun-friendly states like Vermont, Florida, and Oklahoma. Maybe Congress will take up some action here and there along the way. Over time, these victories will add up. And perhaps some sort of breakthrough will happen if public opinion continues shifting and reaches some sort of tipping point. (Maybe some of that will come through a younger generation more open to gun control, although past polls suggest that’s unlikely.)

That’s not a particularly sexy story. It involves watching dozens of governments across the US at work. And instead of a sweeping Australia-style law that bans certain types of guns and effectively confiscates them, observers will have to add up all the reforms over time to see any evidence of significant nationwide change.

But this is how change typically works in America. New federal laws have to work through two congressional chambers (one of which effectively requires 60 out of 100 votes to pass a law), need approval from the president, and can face another hurdle from the courts. As political scientist Francis Fukuyama told Ezra Klein, America is basically a “vetocracy” — a political system that “has always made it very hard for the government to actually do things because it gives a lot of parts of the political system veto rights over what the system does.”

Take a look at another realm: health care policy. The idea of a universal health care law has been the dream of progressives for more than a century. But just because lawmakers have never passed a single-payer bill or some other measure that takes on this entire issue at once does not mean that nothing has happened for more than a century. Instead, we’ve seen incremental changes — the passage of Medicare, Medicaid, the Children’s Health Insurance Program, and Obamacare, to name a few examples — and got more people insurance over time, even if many Americans still don’t have access to health care.

With guns, we have also seen the slow trudge of changes over time. We have never seen an Australia-style law get through Congress, but we did get the National Firearms Act in 1934, the Gun Control Act in 1968, and the Brady Handgun Violence Prevention Act in 1993. The result is America now has stricter gun laws nationwide than it did a few decades ago, even if those laws don’t entirely solve the problem and have major loopholes. And, notably, gun homicides have dropped over the past couple of decades (although many factors contributed to that drop).

If I had to guess, this is the same story we’ll see in the next few decades in America: There will never be an all-encompassing law that contains the full wish list of gun control advocates. But over time, we’ll get more and more restrictions that chip away at the problem. That’s still progress, even if it doesn’t feel all that great at the time.

There will be a lot of death along the way

The downside, of course, is a lot more people will die from gun violence along the way. In 2016, nearly 39,000 deaths were linked to firearms. If that holds up in the coming years, America can expect to lose hundreds of thousands of people to firearms in the next decade alone.

We know gun control could alleviate this. A 2016 review of 130 studies in 10 countries, published in Epidemiologic Reviews, found that new legal restrictions on owning and purchasing guns tended to be followed by a drop in gun violence — a strong indicator that restricting access to guns can save lives. A review of the US evidence by RAND also linked some gun control measures, including background checks, to reduced injuries and deaths.

Gun laws and access to firearms are not the only contributors to violence. Other factors include, for example, poverty, urbanization, and alcohol consumption. But the research suggests that stronger gun laws could play a role in reducing the number of gun deaths, including homicides and suicides.

But as long as America handles change incrementally, this evidence will take time to win out the day — and deaths that stronger gun laws could prevent will continue to happen.

Incrementalism can also work in the other direction. In 2016, for example, Idaho enacted a law that removed permit requirements for concealed carry. If more red, gun-friendly states take similar action, America may not move incrementally toward stricter gun laws so much as move in two different directions at once — where whether a state’s gun laws are stronger than before depends on its broader political leanings.

Still, weaker gun laws are going to be harder to justify, even in red states, if the American public continues to shift toward supporting more gun control. And if Congress takes its own action at some point, it could set a nationwide standard that states can’t overcome.

The question is how long that shift in public opinion — if it persists — takes to percolate through the country as a whole. But if it does, it could lead to real change.