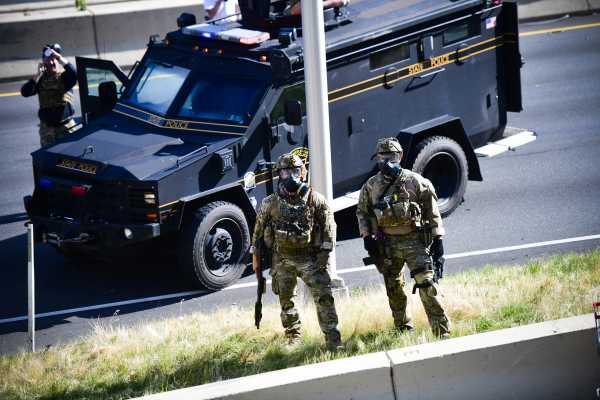 A small group of lawmakers is working on legislation to slow down the militarization of local police departments, in the wake of nationwide uprisings against police violence.

Hawaii Sen. Brian Schatz (D) announced Monday that he would be introducing an amendment in the National Defense Authorization Act (NDAA) to end the 1033 Program, which enables the US military to sell outdated equipment, like armored vehicles and bayonets, to local law enforcement agencies. The nearly 30-year-old program is a chronic thorn in the side of police reform activists. And though Barack Obama restricted the program, it was reinvigorated under President Donald Trump, who has taken pains over the last week to stress to local leaders and law enforcement that the George Floyd protests must be forcibly suppressed.

“It is clear that many police departments are being outfitted as if they are going to war, and it is not working in terms of maintaining the peace,” Schatz told the New York Times. “This is not the only thing we need to do, but as our country sees these images on television that remind us of some countries far, far away, it’s time to recalibrate this program. Just because the Department of Defense has excess weaponry doesn’t mean it will be put to good use.”

Though it’s not clear how much support Schatz’s proposal will find across the aisle, at least one Republican got on board: Sen. Rand Paul. The Kentucky libertarian, who has long called for demilitarizing the police and reining in the US military, has teamed up in the past with Schatz to try to end the program.

Paul’s chief strategist, Doug Stafford, showed support for Schatz’s proposal on Twitter. “We’ve been doing this one [for] years. Happy to help,” he tweeted.

Rep. Ruben Gallego (D-AZ), a former Marine, said he would introduce similar legislation in the House.

The country has been shocked by viral photos and videos showing police using tear gas and flash-bangs, including on peaceful protests. In New York City, video of two police SUVs plowing into protesters went viral, prompting an excuse from Mayor Bill de Blasio. Dozens of journalists have been assaulted and arrested by police while covering the protests.

The 1033 Program was first instituted in the 1990s and later expanded in the early 2000s, as Vox’s Amanda Taub explained:

Further, the law never required that local police be trained on the proper use or deployment of the equipment.

The Obama administration curtailed the program in 2015 after local police suppressed the Ferguson, Missouri, protests using armored vehicles and other military-grade equipment. But President Donald Trump reinstated the program in 2017, saying it was necessary for protecting the police and the life and property of Americans.

It’s unclear at this point whether there will be enough votes to pass legislation ending the program, and the next NDAA likely won’t be voted on until later this year. Some lawmakers’ responses — like that of Senate Majority Leader Mitch McConnell (R-KY) — have acknowledged the gravity of the protests and the system that prompted them, without proposing any action on legislation.

“In no world whatsoever should arresting a man for an alleged minor infraction involve a police officer putting his knee on the man’s neck for nine minutes while he cries out ‘I can’t breathe’ and then goes silent,” McConnell said Monday.

Other legislators have proposed different solutions to the police violence problem. Party leaders from both sides have called for congressional hearings on police violence, and Sen. Cory Booker (D-NJ) proposed a series of reforms, including a national police misconduct database, in response to the protests.

Rep. Justin Amash (I-PA) has proposed ending qualified immunity for police. In a letter to colleagues, he said that police misconduct continues “because police are legally, politically and culturally insulated from consequences for violating the rights of the people whom they have sworn to serve. This must change so that these incidents of brutality stop happening.”

Despite the many calls for reform, many are skeptical that legislators will do anything more than just listen and release statements. Washington Post reporter Jeffrey Stein reached out to several Hill staffers Sunday to see if there was an appetite for legislation in response to the protests.

“‘No chance,’” one says of a legislative response,” Stein tweeted.