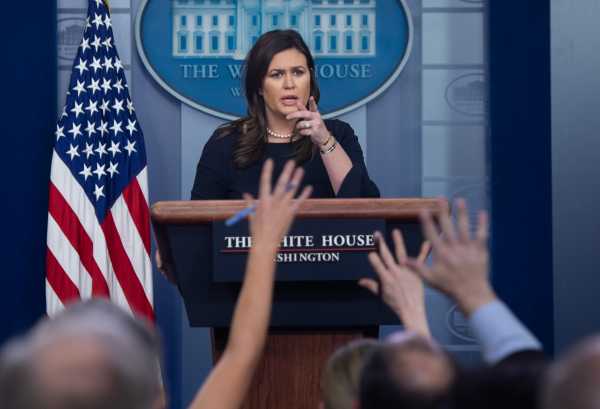 Last Friday morning, President Donald Trump told reporters that Democrats “have become an anti-Jewish party.” During a speech to Republican donors at his private Mar-a-Lago club that night, Trump reportedly went even further and said “the Democrats hate Jewish people.”

It’s true Rep. Ilhan Omar (D-MN) sparked controversy with recent comments about Israel and the American Israel Public Affairs Committee (AIPAC) that some interpreted as invoking anti-Semitic tropes, but the Democratic Party as a whole has made fighting anti-Semitism and other hate speech broadly central to its ideology — especially as Republicans, including Trump, have defended white nationalists and deployed anti-Semitic dog whistles in campaign messaging.

Unsurprisingly, during her first press briefing since late January on Monday, White House press secretary Sarah Sanders was repeatedly challenged to defend what Trump said on Friday. Her efforts to do so not only went poorly but also gave an indication of what Democrats are in for ahead of what promises to be a bruising 2020 campaign cycle.

ABC’s Jon Karl began by pressing Sanders to explain how it’s not hypocritical for Trump to use Omar’s comments as a political cudgel when he’s refused to denounce Rep. Steve King (R-IA), who has unapologetically retweeted self-described “Nazi sympathizers,” met and associated with representatives of far-right European parties with Nazi ties, and pushed anti-Semitic conspiracy theories about Jewish billionaire and Democratic donor George Soros.

“The president — correct me if I’m wrong — has not condemned Steve King,” Karl noted. “Even when he praised white supremacy.”

Sanders resorted to suggesting Trump has denounced King to her in private, even if he hasn’t done so publicly.

“I speak on behalf of the president on a number of topics,” she said.

“You didn’t say yes or no. Does he really believe Democrats hate Jews?” Jackson followed up.

But instead of answering, Sanders referred further questions about Trump’s beliefs to the very people he’s demeaned.

“I think that’s a question you ought to ask the Democrats,” she said.

Toward the end of the briefing, CNN’s Jim Acosta asked Sanders if she would at least agree that Trump’s superheated rhetoric is “sort of beneath everybody.”

“Do you think that the president has thought at all, going into this 2020 campaign, that the rhetoric just needs to be lowered?” Acosta asked. “Whether it’s talking about Democrats, the media, immigrants — or should we just plan on hearing the president use the same kind of language that we heard in 2016, and all through the first couple years of this administration?”

Sanders replied with a drastic escalation by resorting to a false talking point about Democrats and abortion.

“I think that the real shame in all of this is that Democrats are perfectly capable of coming together and agreeing on the fact that they are comfortable ripping babies straight from a mother’s womb, or killing a baby after birth, but they have a hard time condemning the type of comments from congresswoman Omar,” she said, intentionally blurring the line between late-term abortions, a procedure undergone by a very small minority of women, often under dire circumstances, and killing a baby, which is infanticide.

Sanders’s supercharged comments about Democrats and abortion marked the second time in a week she used that lie as a distraction. Last Monday evening, she responded Democrats making wide-ranging document requests of people and entities associated with Trump by accusing Democrats of trying to obscure their “radical agenda of … killing babies after they’re born.”

In sum, on Monday, Sanders tried to justify Trump’s baseless comments about Democrats hating Jews with dodging, deflecting, and lies. Her comments indicate that while Democratic presidential hopefuls spend the next year or so mostly debating policy, Trump will be busy trying to demonize them as hateful baby murderers ahead of the 2020 general election contest.