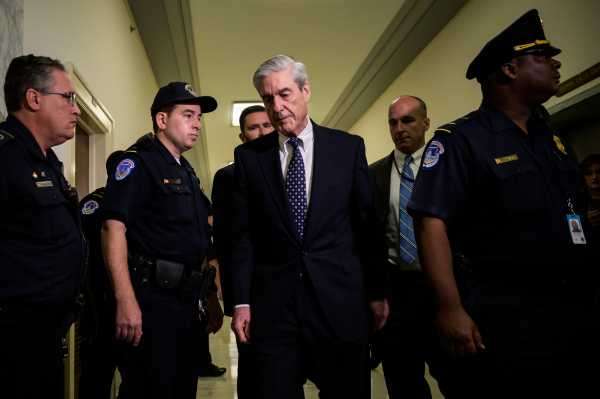 Former special counsel Robert Mueller offered pointed criticism of President Donald Trump’s decision to commute the sentence of his longtime friend and campaign advisor Roger Stone in an op-ed in the Washington Post on Saturday, declaring that despite being granted clemency, Stone “remains a convicted felon, and rightly so.”

Trump commuted Stone’s sentence on Friday — just days before he was set to begin serving a 40 month prison sentence after being convicted of lying to lawmakers who were investigating whether Russia influenced the 2016 elections. That conviction stemmed from work done by Mueller’s team in its investigation of the Trump campaign’s ties to Russia. Stone was convicted of seven charges in total, which also included witness tampering and obstructing a congressional committee proceeding.

Mueller’s emphatic defense of his investigation’s findings about Stone marked a sharp departure from his history of either avoiding discussing his investigation or presenting its findings in understated terms, and has prompted Sen. Lindsey Graham (R-SC), the chairman of the Senate Judiciary Committee, to say he will allow Mueller to testify before the Senate, something Democrats on that committee have long pushed for.

On Saturday, Trump continued his defense of Stone, tweeting his friend had been “targeted by an illegal Witch Hunt that never should have taken place.”

But in his op-ed, Mueller refuted the president’s aspersions, and systematically laid out Stone’s many violations of the law — including the way he lied to avoid revealing his links to the Russian government:

Mueller also defended the women and men who conducted the investigations and prosecutions, writing that they acted “with the highest integrity” and operated based “solely on the facts and the law.”

Mueller’s decision to intervene in the public debate that followed Trump’s commutation diverged from his general tendency to avoid defending his investigation, and his apparent preference to have the report his team produced speak for itself. Vox’s Zack Beauchamp described Mueller as having “such a circumscribed view of his own responsibilities that he didn’t want to answer questions beyond simple statements or citation of the full report” when he testified before the House of Representatives last July:

Mueller did not detail what informed his decision to write the op-ed, but it comes at a time when Democrats — as well as some Republicans — have expressed deep concern about the extraordinary precedent that Trump is setting by granting clemency to his friend and someone who, according to prosecutors, lied to protect the president.

Jeffrey Toobin, a legal analyst for CNN and the New Yorker, has argued that with the commutation of Stone, Trump has entered new, dangerous territory.

“Trump had not, until now, used pardons and commutations to reward defendants who possessed incriminating information against him,” he wrote in the New Yorker. “The Stone commutation isn’t just a gift to an old friend—it is a reward to Stone for keeping his mouth shut during the Mueller investigation. It is, in other words, corruption on top of cronyism.”

Trump is receiving pushback for what may be unprecedented corruption

Trump’s move to pardon Stone was notable even amid his sustained trend of using his powers as president to reward those who are loyal to him (and punish those who he believes aren’t). Experts say that that the frequency with which Trump has granted clemency toward those he sees as allies — like when he pardoned or commuted the sentences of 11 people who had an inside connection to him or were promoted on Fox News in February — appears to be historically unique.

“Modern presidents have sullied clemency through disuse (both Bushes) and occasional self-serving grants (Clinton),” Mark Osler, a law professor at the University of St. Thomas’ School of Law, told NPR. “However, no president [until Trump] has ever used clemency primarily to reward friends and political allies.”

“It’s staggering corruption, but I think it’s important for people also to know it’s a threat to our national security,” Pelosi said on CNN’s State of the Union. “The whole impeachment process was about our national security. Why we are at the Supreme Court on these cases was to find out about the Russian connection, and we will continue to pursue that. This case was about the Russian connection.”

Schiff argued that the situation speaks to the urgency of passing a bill he introduced in 2019 — the Abuse of the Pardon Prevention Act, which requires the president to present evidence to Congress when granting clemency to someone in an investigation in which the president or a family member is a witness, subject, or target.

Sen. Mitt Romney (R-UT), who has demonstrated a willingness to break from his party in his criticism of the president, deemed Trump’s move ”unprecedented, historic corruption.”

He was joined in this criticism by Sen. Pat Toomey (R-PA), who said in a statement, “In my view, commuting Roger Stone’s sentence is a mistake,” adding, “Earlier this week Attorney General Bill Barr stated he thought Mr. Stone’s prosecution was ‘righteous’ and ‘appropriate’ and the sentence he received was ‘fair.’ Any objections to Mr. Stone’s conviction and trial should be resolved through the appeals process.”

The critiques from the Republican senators caused Trump to lash out at them on Twitter Saturday, calling them Republicans in name only.

Trump ally Sen. Lindsey Graham followed that tweet with one of his own, indicating Mueller would be asked to testify before his committee.

“Apparently Mr. Mueller is willing — and also capable — of defending the Mueller investigation through an oped in the Washington Post,” Graham wrote on Twitter. “Democrats on the Senate Judiciary Committee have previously requested Mr. Mueller appear before the Senate Judiciary Committee to testify about his investigation. That request will be granted.”

It’s unclear, however, whether Mueller will ultimately testify, or if the op-ed will be his final word on the issue.