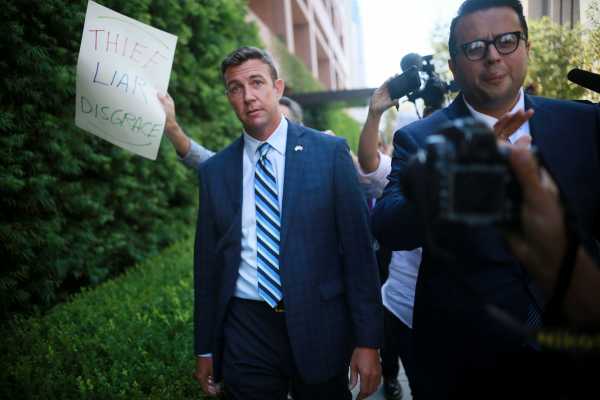 Less than a month from Election Day, California Republican Rep. Duncan Hunter has been baselessly alleging that his opponent, Democrat House candidate Ammar Campa-Najjar, a Mexican-Palestinian-American former Barack Obama aide, is an “Islamist” and a “security threat” to the United States.

Hunter, who is under federal indictment for using $250,000 in campaign funds on personal expenses, has been running an anti-Muslim attack campaign, trying to use Campa-Najjar’s Palestinian heritage against him. (The Democrat is a Christian.)

At a campaign event in late September, Hunter was recorded strongly implying Campa-Najjar, whose mother is Mexican and father is Palestinian, was an “Islamist” trying to “infiltrate Congress.” Since then, Hunter’s campaign has only doubled down on the message, connecting Campa-Najjar to his grandfather’s ties to a terrorism plot in the 1970s. Campa-Najjar never met his grandfather, who died 16 years before he was born.

Most recently Hunter’s campaign put out a letter signed by three retired Marines claiming that Campa-Najjar would give secret information on US military operations in the Middle East to foreign adversaries.

“There are two candidates in this race: One of us was indicted by the FBI, the other one was cleared by the FBI to work at the White House,” Campa-Najjar says in response to these attacks, calling them “unhinged.”

Hunter, who has been in Congress since 2009, won this Trump-friendly district by 27 points in 2016. But Hunter’s corruption scandal has taken a toll his candidacy. Less than a month from Election Day, the polls show Campa-Najjar, a 29-year-old first-time candidate, within single digits of Hunter.

Hunter is borrowing from a familiar playbook to keep up the fight, retreating to the kind of race-baiting Republicans have turned to over and over again when they feel under siege.

Hunter is hoping racism will distract voters from his corruption scandal

The attacks began a month after Hunter and his wife pleaded not guilty to 60 counts of campaign fraud and wire fraud. Hunter started with Campa-Najjar’s name.

The Republican claimed Campa-Najjar, who was born Ammar Yasser-Najjar but went informally as Ammar Joseph Campa-Najjar when he worked in the Obama administration was trying to hide family ties to terrorism. (He’s recently officially changed his name to the latter.) He went on to say Campa-Najjar was an “Islamist” trying to “infiltrate” the government. These claims are baseless.

In September Hunter released a campaign ad calling Campa-Najjar a “security risk,” tying him to his grandfather, who was part of the Munich massacre terrorist attack and who died 16 years before Campa-Najjar was born.

Hunter, who appears at the end of the ad in full Marine combat gear, also claims Campa-Najjar has been endorsed by both the Council on American-Islamic Relations (CAIR) and the Muslim Brotherhood. CAIR does not endorse candidates, though an independent CAIR PAC has supported his nomination, and there is no evidence of support from the Muslim Brotherhood.

Hunter has been fundraising on this message since.

Most recently, his campaign paid for a letter signed by three retired Marines claiming that Campa-Najjar would pass on secret military intelligence to terrorist groups if elected to Congress — a claim that again appears baseless, as pointed out by CNN’s Andrew Kaczynski.

This is Trump country California — and Hunter is in trouble

Scandals like Hunter’s weigh heavily on elections. They can have a net effect of 9 percentage points in an election, FiveThirtyEight’s Nate Silver found in an analysis of past scandal-ridden incumbent candidates’ races. Hunter’s scandal alone prompted the nonpartisan Cook Political Report to move the midterm rating for California’s 50th District from Solid Republican to Leans Republican.

Hunter is using the same playbook vulnerable Republicans are using across the country. In the past two years, we’ve repeatedly seen Republican candidates resort to race-baiting around MS-13 gangs, Confederate statues, and sanctuary cities to rally the base.

And in this part of Southern California, there are voters susceptible to that kind of messaging, according to Kurt Bardella, a former media consultant for Breitbart News who has worked for several San Diego Republican Congress members. After all, this is the part of California where you see Confederate flags, and where many people only socialize with people who look like them.

The conservative mayor of El Cajon, California, Bill Wells, tried to explain Hunter’s ad by saying the Democrat has to prove he’s the good Christian man he says he is.

“It is suspect to come from that kind of lineage,” Wells said. “And I don’t think it’s enough to say you can’t judge me by that and that I disavow that — you have to show that you disavow that.”

But as far Campa-Najjar is concerned, the voters paying attention to Hunter’s attacks were never going to vote for a Democrat in the first place — let alone a Mexican-Palestinian-American one. And there’s a good chance this kind of messaging will backfire.

“I think that Ammar has gotten more mileage more support because of the vicious attacks,” Kristine Alessio, an ex-Republican City Council member in La Mesa, California, a city in the race’s congressional district. “I don’t think I’m alone. I think lots of people are tired of it.”