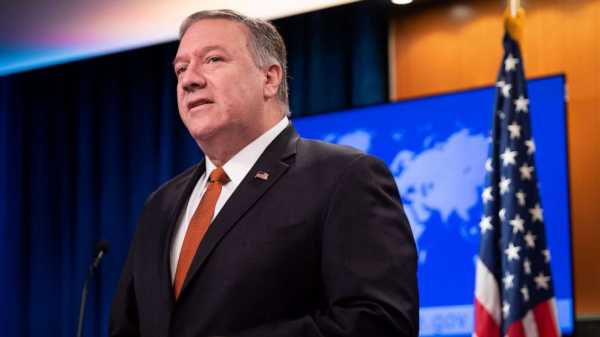 Secretary of State Mike Pompeo on Tuesday endorsed President Donald Trump’s calls for Ukraine to investigate a debunked theory about the Democratic National Committee’s server — one that holds that Russia’s 2016 presidential election interference did not happen and it was Ukraine that conspired with the Democratic Party to take down Trump’s campaign.

Pompeo, one of Trump’s top advisers, also defended the administration’s stonewalling of the House impeachment inquiry after Trump suggested he would like the top U.S. diplomat to testify before Congress.

During his July 25 call with Ukraine’s President Volodymyr Zelenskiy, Trump first raised the issue of Crowdstrike. 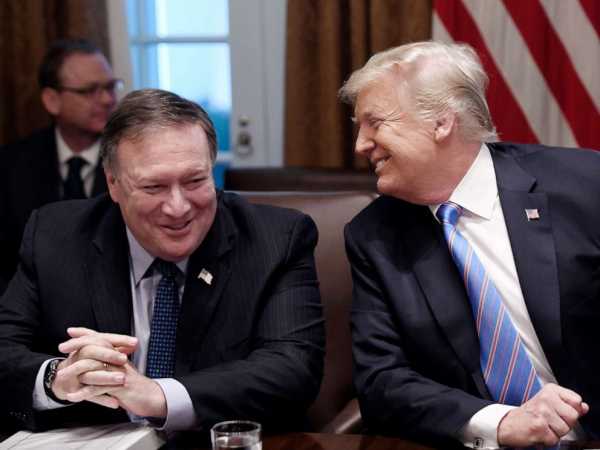 Secretary of State Mike Pompeo and President Trump share a laugh during a cabinet meeting with U.S. President Donald Trump in the Cabinet Room of the White House, July 18, 2018 in Washington, DC.

“I would like you to find out what happened with this whole situation with … Crowdstrike,” Trump said, according to the memorandum of the call released by the White House in September, adding, “The server, they say Ukraine has it.”

Crowdstrike is the cybersecurity firm that first disclosed the massive Russian operation to infiltrate the Democratic National Committee’s (DNC) servers in the months before the 2016 election. But its name has also become shorthand for a debunked conspiracy theory promoted by Trump that the server is missing, likely in Ukraine.

There are variations of the theory, including that the missing server is part of a cover-up in which Ukraine worked with the Democrats to fake Russian interference while trying to take down Trump.

Pompeo was asked Tuesday whether the U.S. and Ukraine should investigate whether Ukraine, and not Russia, hacked the Democratic Party.

“Any time there is information that indicates that any country has messed with American elections, we not only have a right, but a duty to make sure we chase that down,” he said.

Seeming to downplay Russia’s interference — despite efforts by the intelligence community and special counsel Robert Mueller to document and publicize its extensiveness — the former CIA director added, “There were many countries that were actively engaged in trying to undermine American democracy, our rule of law, the fundamental understandings we have here in the United States.”

Pompeo also defended the State Department’s response to the House impeachment inquiry, saying it will “continue to comply with all the legal requirements… as required by law and as appropriate, so that appropriate oversight can be conducted.” 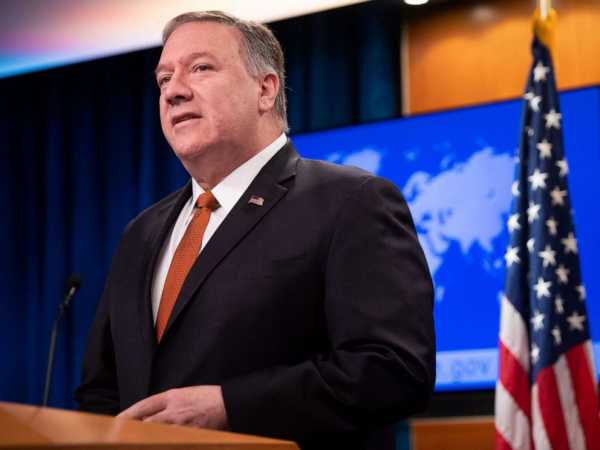 But the State Department has refused to share any documents with House investigators, including blocking witnesses that have testified from handing over work emails — which Democrats says has impeded the probe.

“I have not had access to all of my phone records, State Department emails, and other State Department documents,” U.S. Ambassador to the European Union told the House Intelligence Committee last Wednesday in his open testimony. “Having access to the State Department materials would have been very helpful to me in trying to reconstruct with whom I spoke and met, when, and what was said.”

(MORE: Trump says Pompeo would run for Kansas Senate seat if Republicans in danger of losing it)

Instead, under two separate lawsuits filed under the Freedom of Information Act, the State Department has been ordered to release documents related to Ukraine and the effort by Trump’s personal lawyer Rudy Giuliani to dig up dirt on Trump’s political opponent, former Vice President Joe Biden.

Pompeo pointed to those emails being released as the department complying “as required by law and as appropriate,” arguing that the documents sought by the three House committees are covered by executive privilege and national security protections.

That argument was challenged in federal court Monday by a judge that ruled U.S. officials and former officials “cannot ignore or defy congressional compulsory process, by order of the President or otherwise.”

Trump pushed back on that in a series of tweets Tuesday, saying, “I am fighting for future Presidents and the Office of the President. Other than that, I would actually like people to testify,” including Pompeo.

Asked whether he would testify, Pompeo smiled and said only, “When the time is right, all good things happen,”