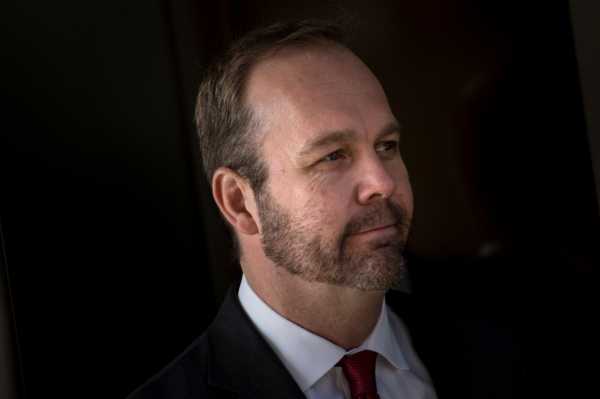 Rick Gates, the longtime right-hand-man to Paul Manafort who had high-level roles on the Trump campaign and inauguration, is not yet ready for sentencing, Mueller’s team said Friday — because Gates “continues to cooperate with respect to several ongoing investigations.”

Gates struck a plea deal with Mueller’s team in February 2018 and testified against Manafort at his trial in August 2018.

What’s left tantalizingly unclear, as ever, is what’s going on with Mueller’s own investigation. For weeks, it’s been rumored in Washington that the special counsel is close to wrapping up — but no Mueller report has yet materialized.

However, Gates’s continued cooperation doesn’t necessarily tell us anything about the state of the special counsel probe because he isn’t only cooperating with Mueller.

Since both of those investigations appear to remain active, it makes perfect sense that Gates isn’t yet ready for sentencing. Gates could also be providing assistance to other investigations we don’t know about.

Who is Rick Gates?

Basically, Gates is Paul Manafort’s protégé and right-hand man, who was at his side during his past decade of lobbying and foreign work before going with him to join the Trump campaign.

Gates is two decades younger than Manafort and joined his firm in 2006, eventually managing much of its Eastern Europe portfolio and often working out of Kiev. Gates was deeply involved in Manafort’s work for Viktor Yanukovych, then Ukraine’s president, and with the web of offshore accounts Manafort used for money laundering.

So when Trump brought on Manafort to his presidential campaign in March 2016, Gates came along, too. Gates is not known to have ever had much of a personal relationship with Trump, but he was Manafort’s top deputy during the months Manafort was running the show. Even after his boss’s ouster in August 2016, Gates stuck around, staying with the campaign through the general election.

After Trump won, Gates got another plum job. Billionaire real estate investor Tom Barrack, in charge of planning Trump’s inaugural, turned to Gates as his chief deputy. (Barrack had known Manafort since the 1970s and helped convince Trump to bring him on to the campaign.)

According to a November 2016 report by Michael Isikoff of Yahoo News, Gates became instrumental in the inauguration’s fundraising and planning. Isikoff quoted a source calling Gates the “shadow” chair of the inauguration and Barrack’s “chief deputy.” Then, in 2017, Barrack gave Gates a job at his investment firm Colony Capital.

Things took a turn for Gates in late October 2017, when special counsel Robert Mueller indicted both him and Manafort. The charges were financial and undisclosed lobbying crimes related to the pair’s past Ukraine work, and the then-45-year-old Gates was facing the prospect of a decade or more in jail. An additional indictment for tax and bank fraud charges in February 2018 further turned up the heat.

So Gates flipped. On February 23, 2018, he pleaded guilty to a reduced set of charges and committed to cooperate with the government.

What are the investigations Rick Gates been cooperating with?

Gates’s most visible cooperation involved providing evidence against Manafort and testifying against his old boss at his trial (in which Gates admitted to embezzling and to an extramarital affair). Gates also provided Mueller information about his boss’s contacts with Konstantin Kilimnik, an associate who the US government claims is tied to Russian intelligence — a topic Mueller’s team has said goes to the “heart” of their investigation.

The full extent of information Gates has provided to Mueller about the Trump campaign’s ties to Russia is unclear. It’s not known whether Gates mainly provided information about Manafort on this front, or whether he also had important information about others in the campaign.

But Gates hasn’t only been cooperating with Mueller, the special counsel has made clear in court filings over the past few months. “Defendant Gates continues to cooperate with respect to several ongoing investigations,” Mueller wrote last November (and again on Friday). What might those be?

For one, there’s been a spinoff from the Manafort case, related to whether other lobbyists and lawyers who worked with Manafort and Gates regarding Ukraine should have registered as foreign agents. Democratic lobbyist Tony Podesta, Republican lobbyist Vin Weber, and former White House counsel Greg Craig have all come under scrutiny. According to CNN, Mueller referred these matters to the US Attorney’s Office for the Southern District of New York (SDNY).

Secondly, it’s become clear in recent months that the Trump inauguration is under investigation too for various possible crimes related to its donors and its spending. Gates’s high-level role in planning the inauguration planning committee makes him a potentially valuable cooperator there as well, though his specific role in that probe is unclear.

The big picture is that it looks like Gates has been Mueller’s star cooperator so far. Unlike Michael Cohen, he agreed to open-ended cooperation. Unlike Michael Flynn, the government clearly wants more from him. Unlike Paul Manafort, his cooperation didn’t collapse amid accusations of lying. Unlike George Papadopoulos, he didn’t talk to the media and spur the special counsel to cut off contact with him. And even if Mueller is close to wrapping up, Gates’s cooperation clearly isn’t done.

For more on the Mueller probe, follow Andrew Prokop on Twitter and check out Vox’s guide to the Trump-Russia investigation.