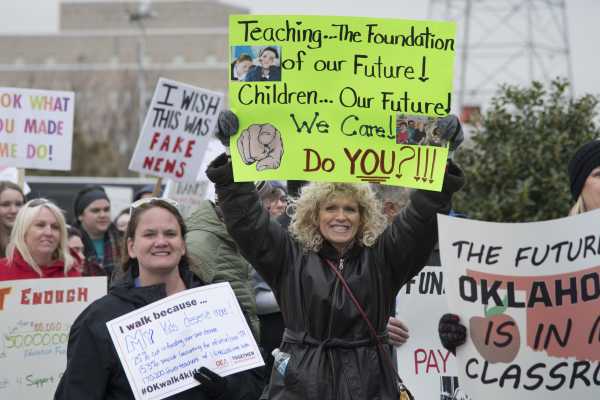 Teachers across the United States who are protesting years of school funding cuts have the American public on their side.

Most Americans agree that teachers are underpaid, and slightly more than half of adults support striking as a strategy to change that, according to a new AP/NORC poll. Half of Americans also said they are willing to pay more taxes to fund schools and pay teachers more.

The survey of 1,140 adults, conducted April 11 through 16, gauged public opinion on the wave of teachers strikes sweeping through the nation. Teachers in West Virginia, Oklahoma, and Kentucky all walked out of class in recent months to pressure state lawmakers to spend more money on schools or teachers (or both). Their success has inspired teachers in Arizona and Colorado to prepare their own work stoppage.

The AP/NORC poll shows that these teachers have a lot of support, though not everyone agrees with their strategy. About 78 percent of adults surveyed said schools don’t pay teachers enough, and 52 percent said they support educators who are going on strike to demand higher salaries (25 percent disapprove of strikes). Adults who knew about the recent teacher walkouts were more likely to support the idea of teachers striking — 80 percent of them did.

On Thursday, a majority of Arizona teachers plan to go on strike, despite Gov. Doug Ducey’s promise to give them a 20 percent pay raise to avert a shutdown. The teachers group, Arizona Educators United, said they want to see a bill passed, and that it should include more school funding and raises for all school staff.

Teachers in Arizona are among the lowest-paid in the country, and lawmakers have cut education spending per student more than any other state since 2008 — by 36.5 percent. Meanwhile, state lawmakers have been on a tax-cutting spree, slashing taxes on a host of businesses in 2016, from insurance companies to charter plane operators. Last year, Ducey signed a bill with more tax breaks for businesses as well as a 1 percent raise for teachers.

Thousands of teachers in Colorado have joined the grassroots movement, holding rallies at the state capitol in recent weeks to demand a pay raise and more funding. Many are planning to walk out of class on April 27 to protest, and several school districts, including Denver schools, have announced they will close that day.

The country is watching. About half of Americans surveyed said they were paying attention to news about the teacher strikes.