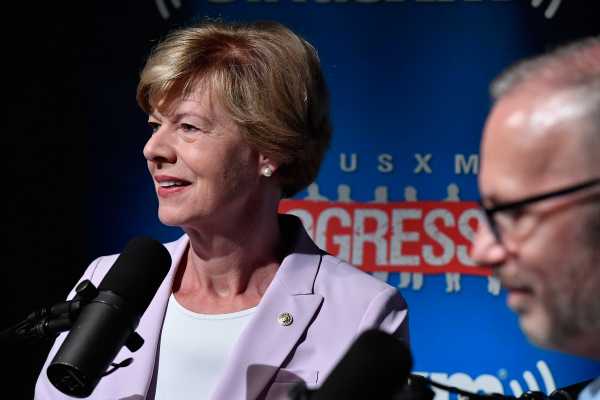 After Sen. Tammy Baldwin (D-WI) won reelection by a nearly 11-point margin — in a state Donald Trump carried in 2016 — a lot of people wanted her to run for president.

But while many of her colleagues throw their hats in the ring for 2020, Baldwin is staying in the Senate — “somebody has to hold down the fort,” she told me at a diner in Manhattan on Monday.

A big part of her work this term will be spearheading legislation to prevent discrimination against LGBTQ Americans. In the wake of the 2015 Supreme Court decision that ensured marriage equality across the country, many advocates have pointed out that while LGBTQ people can now marry a partner of their choice, they still lack protection from discrimination when they look for a job, shop for a house, or sit down to eat at a cafe. The Equality Act, which Baldwin and House Democrats will be introducing in both houses of Congress on Wednesday, aims to change that.

The legislation would amend the 1964 Civil Rights Act to prohibit discrimination against LGBTQ people in employment, education, housing, and public accommodations like restaurants, as the Washington Blade reported last week (currently, the Civil Rights Act prohibits discrimination based on race, religion, and sex, but not sexual orientation or gender identity). In the past, Democrats have put forward the Employment Non-Discrimination Act, which would protect LGBTQ employees from discrimination in hiring and firing, but it never passed both houses of Congress — and now, Baldwin believes, is the time for even more ambitious legislation that covers not just work but many other areas of life where LGBTQ people face stigma.

The bill is unlikely to pass the Republican-controlled Senate, Baldwin said. But by introducing it, she hopes to make protections for LGBTQ Americans part of the national conversation for 2020. It’s one way Baldwin, the first openly gay woman elected to Congress, is working to influence the coming election — even if she isn’t running herself.

The senator is also poised to be influential in another way. Her state is likely to be pivotal in the presidential contest, especially since it was announced on Monday, while we finished our coffee at the diner, that Milwaukee will host the 2020 Democratic National Convention. Trump’s win in Wisconsin in 2016 caught many Democrats by surprise, and candidates will likely be seeking Baldwin’s thoughts on carrying the state. She shared her advice — as well as her thoughts on seeing multiple women running for president — in our conversation on Monday, which has been condensed and edited.

You’ve mentioned in the past that you’re not planning to run for president in 2020 — is that still the case?

I do not plan to run for president in 2020. In the last several months, I will note that we’ve been working on a bid to bring the Democratic National Convention to Milwaukee, Wisconsin. We are very hopeful that the next president will be nominated from the state of Wisconsin, although it will not be me.

There are several of my colleagues in the Senate who are running for president, [but] some of us have to hold down the fort.

We need strong, articulate, bright, passionate people in all levels of government. I started on the county board and served at the state level and now I’m humbled to serve at the national level, but our unique voices matter at all levels.

Talk to me a little bit about the importance of Wisconsin for 2020. What’s your advice for carrying that state?

I have often said the path to the presidency goes right through Wisconsin. It was clearly one of the most critical states in 2016. I remember when some of our neighboring states were called for Trump, late into the evening and everyone was still saying, “Well, Wisconsin won’t go for Trump” — and Wisconsin went for Trump.

Lots of people were trying to assess what happened in Wisconsin, and one of those people was me because I knew I was going to be up in two years. I was viewed as a very vulnerable incumbent in part because of Trump winning Wisconsin.

A lot of attention from unwelcome sources, [like] the Koch brothers, [was] trained on me, and so we did everything we could to understand what went wrong in 2016, started our organizing efforts 22 months before the next election and assertively reached out to all of the really inspired advocacy groups, like Indivisible, Move On, the Women’s March organizers, the March for Our Lives organizers, really focusing on bringing people who probably hadn’t voted in ’16, but were so horrified by the results that they were absolutely going to be involved in the issues.

My campaign was focused on the issues that Wisconsinites were struggling with and things that I care deeply about, so health care — coverage for people with preexisting health conditions. My campaign was focused on respecting and rewarding the dignity of hard work and helping close skills gaps and opposing things like the tax measure that’s sent most of its benefits to the top and then they surely didn’t end up trickling down. I ended up having nearly an 11 point margin of victory. My own advisers said at the beginning of my campaign, “expect that 52 percent is your ceiling.”

So it was really amazing. And we elected a new Democratic governor, lieutenant governor, attorney general, state treasurer. Except for the governor and myself, the newly elected statewide leaders are all in their 30s. My favorite quip is, “girls can have coattails too.”

Speaking of which, this year we’re seeing multiple women running on the Democratic side for president. How do you think things will be different from 2016 when we have not just one female candidate in the race, but several?

I think it brings us beyond this idea of firsts, seconds, and now it’s sort of, well, this is what we should anticipate in the future. It’s now the way things are.

I think when people start running in the primaries, we will have so many of these Democratic Americans having voted more than once in their life for a woman to be president. And that, from the voter perspective, is pretty significant.

Let me give you a story. It was about the time when fire departments across the United States decided they had to offer an opportunity for women to be firefighters. Most of the women who tried failed the physical exams because they were biased against women. And so you had these fire departments across the United States where one woman would make the training class and she would be harassed and bullied and picked on and there would be no one she could talk to, and it was not as successful as you’d hope it would be.

In Madison, Wisconsin, because we had a particularly cool fire chief at the time, he decided that the first class that had women in it would have 10 women. They had each other’s backs, and it was a totally different experience for them than the isolated women.

I don’t know if that’s going to happen during this presidential campaign, but I have a feeling that there’s going to be that sort of thing. The critical mass makes a difference.

Let’s talk about the Equality Act. What would this legislation do?

It responds to the challenge that over half the states in the United States do not have comprehensive protections against discrimination on the basis of sexual orientation or gender identity. Having legislation passed at the national level would go along way in resolving these issues.

How does the Equality Act differ from the Employment Non-Discrimination Act?

The Employment Non-Discrimination Act tackled discrimination in one very important part of people’s lives, which is the ability to work in order to support yourself and your family. And yet there are other critical aspects of life where people need protection from discrimination: keeping a roof over your head, not being refused housing or evicted from housing because you have a landlord who doesn’t want gay people In their apartment building, being offered services in public accommodations, being able to order at the lunch counter. And certainly education, which is the gateway to economic opportunities in this country.

I think there was fear that a piecemeal approach could take decades, as it already seems to have. And we took as inspiration the 1964 Civil Rights Act, which focused on protections against discrimination on the basis of race, religion, or sex. The 1964 Civil Rights Act has been interpreted by the courts over and over again in the decades since its passage and therefore there’s clear precedent for the courts to follow. We wouldn’t be starting out with a brand new law that had never been tested in court before.

This seems like a moment for a lot of big-picture legislation. Obviously we’ve seen the conversation around the Green New Deal. We’ve seen talk about Medicare-for-all on the campaign trail. Do you think this moment is especially ripe for ambitious legislation like the Equality Act?

I think the moment really says, elections matter. A few short months ago, we had a Republican House and a Republican Senate and a Republican president. And just the hard work of advocates and activists across the country in electing wonderful new leaders to the House of Representatives has resulted in discussion of topics that have been shelved by the Republicans. And whether that is the first gun-safety legislation in a quarter-century to pass; committees holding hearings on climate change, which they haven’t for a long time; or the introduction of the Equality Act, it is bringing forth the debate on critical issues that we should have debating all along.

What kinds of discrimination are LGBTQ people experiencing in America today that this legislation is designed to address?

With the gay, lesbian, and bisexual community, marriage equality is such an amazing and powerful breakthrough in civil rights. However, some people, by getting married, that’s how they were coming out to their bosses and to their landlords.

So it, in a number of cases, has created jeopardy in terms of employment or housing. Like many have said, you can get married in the morning and fired in the afternoon.

What are the prospects for this legislation in the House and the Senate?

I believe that the Equality Act will pass the House, and I hope it happens this year, [to] give us as much time as possible to push in the Senate. Generally, Sen. McConnell has not shown himself likely to schedule legislation for consideration on the floor unless he personally supports it and unless he gets signals from the president that the president supports it. Sadly, that makes the prospects low that we’ll get a chance to have a vote.

But I think it’s really important that we, nonetheless, give the measure as much visibility as we can and talk about what’s important and encourage members of the LGBTQ community and their allies to talk about how important this is and discuss that with their senators in particular, and with the president. And that either builds momentum for Mitch McConnell to do what we don’t expect him to do or it builds momentum for the 2020 elections to say: “This is really important. We ought to be looking at the candidates’ records on this issue.”