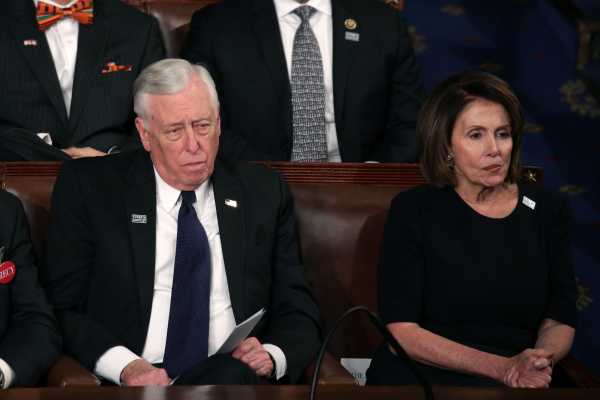 This comes as Senate leaders announced they will vote on a budget deal that would fund the government through the end of March, extend funding for community health centers for two years, and substantially boost defense and domestic programs. The budget is potentially a huge win for Democrats, with an enormous boost to domestic spending in exchange for a boost to military spending.

But hard-right conservatives are already railing against the deal. A conservative revolt would mean Ryan would need Democrats to support the deal — and Pelosi sounds willing to withhold that support if she doesn’t get a vote on DACA.

Pelosi said “a large number” of fellow Democrats are prepared to vote against a short-term spending bill and the massive two-year budget caps deal without a “fix” for DREAMers. Congress has to fund the government by midnight Thursday or the government will shut down for the second time in three weeks.

Senate lawmakers are preparing for an open floor debate on immigration sometime next week, which McConnell has promised will result in some kind of final DACA package. Now Pelosi is echoing demands from progressives and immigration activists hoping to secure DREAMers’ fate with this deal.

Rep. Mark Meadows (R-NC), who leads a caucus of House conservatives, has signaled he and a number of lawmakers in his group are unlikely to vote for a short-term spending bill with such high budget numbers. They have also complicated the immigration debate in the House, showing no interest in drafting bipartisan proposals.

Ryan has pledged he won’t bring up any immigration bill that doesn’t have the majority of his party’s support, an idea called the Hastert Rule. Whether he will be able keep to that promise and strike a deal with Pelosi, who is threatening to shut down the government, is another story.

When it comes to spending, the House usually goes along with what the Senate can pass, but this time the political headwinds seem to be reversed.