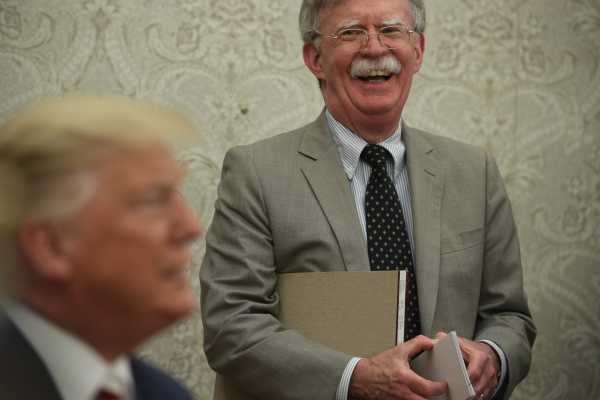 Faced with the news that President Trump’s former National Security Adviser John Bolton’s new book includes an account that undercuts one of Trump’s central impeachment defenses, Fox News and the Trump-supporting Republicans who regularly appear on it went all-in on smearing him as a greedy and disgruntled former aide who only wants sell more copies.

Take host Sen. John Cornyn (R-TX), who joined Monday’s edition of Fox & Friends and said, “The timing is a little interesting, isn’t it?”

This particularly talking point was utterly foreseeable — I predicted on Sunday night that it would get heavy play on Fox News. But it illustrates the extent to which Trumpworld is relying on ad hominem attacks and misleading deflection instead of trying to justify the president’s actions on the merits.

Trump’s legal team argued during Saturday’s installment of the impeachment trial that the administration’s hold up of military aid to Ukraine was predicated on good-faith concerns about rooting out corruption in the country, not his desire for political favors. This talking point is absurd, coming as it does on behalf of arguably the most personally corrupt president in modern American history, and it ignores that the administration didn’t go through the proper channels to orchestrate the holdup. But it has at least given Trump cover to deny that his Ukraine scheme was motivated by selfish political interests.

Bolton’s book draft, however, undercuts that defense. The New York Times reported on Sunday that in it, Bolton details how Trump directly communicated to him during a meeting in August that aid wouldn’t be released “until officials there helped with investigations into Democrats including the Bidens.”

Democrats responded by reiterating their calls for Bolton to testify, noting that his account “directly contradicts the heart of the President’s impeachment defense.” Trump responded by denying the conversation that Bolton details ever happened. And his spin machine got busy smearing Bolton as greedy — and worse.

In a string of tweets in which he basically called Bolton a liar, Trump also impugned his motives, saying Bolton is only coming forward now “to sell a book.” That talking point dominated Fox News’s Monday morning programming.

Over on Fox Business, Maria Bartiromo also used this talking point, accusing Bolton — a former Fox News contributor — of trying “to sell a book.” But it wasn’t just the Fox hosts.

Sen. John Hawley (R-MO) went on Fox & Friends for an interview and noted that Bolton’s book “is apparently on sale for preorder today too, so it’s certainly going to sell a lot of books,” and incorrectly described Bolton’s account as “a bunch of hearsay.” White House press secretary Stephanie Grisham joined as well and demeaned Bolton’s publisher as “the same publisher that [former FBI Director James] Comey used,” adding, “the timing is very suspect.” (Grisham’s claim is incorrect — Comey’s book was published by Macmillan while Bolton’s is being published by Simon & Schuster.)

But perhaps the most outlandish spin came from Rep. Jim Jordan (R-OH), who serves on Trump’s impeachment defense team and went as far as to smear Bolton — a Republican who worked for multiple Republican presidents — as a Democrat.

“Coming out at this late hour is a kinda typical move from the Democrats,” he said.

The irony of the situation is that it is the White House, not Bolton, that appears to be responsible for the timing of news of Bolton’s book draft breaking just days before senators will vote on whether to compel him to testify. The Times reports the White House was first sent a copy of the draft last month, weeks after Trump told reporters he’d “love” for his top aides to testify during his Senate trial. Bolton’s lawyer blamed the White House for leaking about it.

To be clear, the timing of Bolton’s book is certainly a fair topic of criticism. Even if Bolton felt compelled to comply with the White House’s directive against testifying, there was nothing stopping him from going public about what happened during the August meeting much sooner, when it could’ve been of use to the House impeachment inquiry. But accusing him of just trying to goose book sales isn’t a strong attack on his credibility, especially considering that his account is consistent with the timeline of the aid holdup set forth in the testimony of other administration aides, including Ambassador to the EU Gordon Sondland.

Trump’s credibility, meanwhile, can be inferred from the fact that other tweets he posted about the Bolton book contained blatant lies (he claimed House Democrats “never even asked Bolton to testify,” but they did and were rebuffed by the White House) and misleading claims (he urged people to “READ THE TRANSCRIPTS!” even though the White House call summary of his July call with Ukrainian President Volodymyr Zelensky contains evidence of the corrupt quid pro quo Bolton describes).

Meanwhile, as Fox world attempted to portray the Bolton book as a nothingburger, Sen. Mitt Romney (R-UT) said on Monday morning that he believes it’s “increasingly likely” that four Republicans will vote along with Democrats to compel Bolton’s testimony.

“I can’t begin to tell you how John Bolton’s testimony would ultimately play on a final decision but it’s relevant. And therefore, I’d like to hear it,” Romney told CNN.