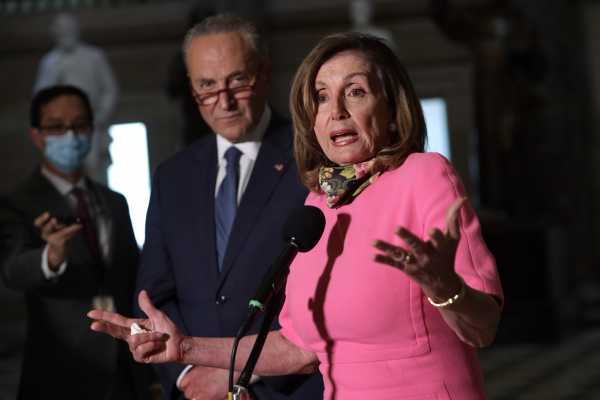 Democratic leaders argued on Sunday that President Donald Trump’s new executive orders that circumvented deadlocked congressional negotiations on coronavirus relief are far from adequate to meet the scope of the crises facing the United States.

“The president’s executive orders described in one word could be: ‘Paltry.’ In three words: ‘Unworkable, weak and far-too-narrow,’” Senate Minority Leader Chuck Schumer said on ABC’s This Week on Sunday. “As the American people look at these executive orders, they’ll see they don’t come close to doing the job in two ways: One, what they propose, second, what’s left out.”

Trump signed four executive orders at his private golf club in Bedminster, New Jersey, on Saturday, claiming that House Democrats have been holding federal assistance “hostage,” and that the GOP has “had it” after more than two weeks of contentious negotiations over the next coronavirus relief package.

As the benefits created by past relief packages — including a federal unemployment insurance benefit and eviction protections — expired, Democrats and Republicans struggled to come to a consensus about what further aid should look like.

Democrats hoped to extend the $600 weekly federal unemployment insurance benefit created by the CARES Act, to broaden the scope of eligibility for stimulus checks, and to expand federal aid to states and cities.

Republicans have been divided in their goals, with Trump pushing for a payroll tax cut many in his party weren’t in favor of; some Senate Republicans advocating for a reduced employment benefit and limited aid to cities and states; and other Republicans demanding that the federal government not go into further debt with relief packages.

But Democrats have fiercely objected to the substance of Trump’s executive actions, characterizing them as clumsily designed and unacceptably narrow in focus. And both Democratic and Republican lawmakers have questioned their legality.

Sunday, Schumer said that Trump’s proposal for unemployment — which calls for the federal government to provide unemployed Americans with an extra $300 per week above normal state unemployment benefits, and for states to add $100 to the federally funded benefit — is impractical for states with budget shortfalls due to the pandemic and that it is too large of a cut from the earlier rate of $600.

“This is an unworkable plan. Most states will take months to implement it because it’s brand new, it’s sort of put together with spit and paste,” Schumer said. “Many states, because they have to chip in $100 and they don’t have money, won’t do it.”

“If he just would have renewed the $600 as we do in the HEROES bill [which House Democrats passed in May] through January, things would flow smoothly,” Schumer added later.

Michele Evermore, an unemployment policy expert at the National Employment Law Project, agreed with Schumer’s assessment on the timeline for implementing this new policy. Evermore told the Washington Post it could take states months to set up Trump’s program because it requires building new systems from scratch rather than funneling money through existing unemployment programs.

Schumer also criticized Trump’s payroll tax holiday as both economically ineffective in the short-term and perilous for the American social safety net in the long-term.

“It’s a deferral, and so it accumulates until January when it expires. Employers are just going to continue to withhold the money — I’ve talked to some — because they don’t want their employees to be stuck wth a huge bill in December, so it’s not going to pump money into the economy,” Schumer said.

He also warned that it “depletes money out of the Social Security and Medicare trust funds,” a complaint the White House brushed off Sunday.

House Speaker Nancy Pelosi said that Trump’s executive order on housing eviction protections, which he appeared to imply was an extension a federal moratorium that expired in July, is in fact nothing of the kind.

“The president didn’t even do a moratorium, he just did a study or a look at a moratorium, so again, something’s wrong,” she said on CNN’s State of the Union on Sunday.

It is true that Trump’s executive order on housing protections does not explicitly prohibit evictions with decisive language. As CNN’s Dana Bash has pointed out, the order instead uses language like “consider, identify, promote and review.” For example, the Department of Health and Human Services and the Centers for Disease Control and Prevention are told to “consider” whether to halt evictions in order to prevent the spread of Covid-19.

Top Democrats are also arguing that Trump’s orders are just as objectionable for what they don’t do. The relief package that they passed in the House in May includes trillions of dollars worth of assistance that go far beyond Trump’s four orders and that cover everything from pressing humanitarian needs to making sure the election process is funded adequately to deal with new needs presented by the pandemic.

Congress, with its control of the US’ coffers, has greater largess than the executive branch in setting policy demanding the sort of massive spending coronavirus relief has required so far — and is therefore able to offer more sweeping solutions. White House officials seemed to acknowledge this fact Sunday, with Treasury Secretary Steve Mnuchin telling Fox News Sunday that he’s “willing to listen” to further Democratic proposals. And Democrats suggested they would like to negotiate further to reach some sort of legislative solution.

“These announcements do nothing to increase testing, nothing to reopen schools, nothing to put food on the table for hungry families, nothing to prevent heroes being laid off across state and local government, nothing to protect the Postal Service or the integrity of our elections, nothing on many critical needs of the American people,” Pelosi and Schumer said in a joint statement issued Saturday night.

Trump’s executive orders might not be legal. But it’s unclear what Dems will do about that.

Democrats — and some Republicans — have also questioned or rejected the legality of Trump’s use of executive authority to enact policies typically handled by Congress.

When asked if she would sue to block the executive orders by CNN’s Bash, Pelosi said the Democrats were still looking into the legal questions.

“Well, the fact is, is that whether they’re legal or not takes time to figure out. I associate my remarks with what the [Republican] Senator [Ben] Sasse, who says, they’re ‘unconstitutional slop.’ Right now we want to address the needs of the American people,” Pelosi said. “As my constitutional advisers tell me, they’re absurdly unconstitutional.”

Schumer also declined to clarify whether Democrats would be pursuing legal challenges. When asked if the unemployment assistance executive order was legal on ABC, he said “I’ll leave that up to the attorneys.”

Pelosi and Schumer’s noncommittal language seems to be a shift in position after Democrats previously said they would file legal challenges if Trump circumvented Congress.

Senate Majority Leader Mitch McConnell and many other Republican leaders — like Sen. Chuck Grassley — have endorsed Trump’s executive actions, but, as Pelosi noted, there isn’t complete consensus in the Republican caucus on the wisdom of the president’s move.

Sen. Lindsey Graham (R-SC), a major ally of Trump in the Senate, tweeted, “I appreciate the President taking this decisive action but would much prefer a congressional agreement.”

While the legal status of Trump’s executive order remains uncertain, Democrats are unwavering in their position that the orders do not constitute a replacement of a bill that they’ve been calling for for months.

Both sides seem willing to consider further negotiations, with Pelosi and Schumer saying in their Saturday joint statement, “Democrats repeat our call to Republicans to return to the table, meet us halfway and work together to deliver immediate relief to the American people.”

Sunday, however, Pelosi warned Democrats remain unwilling to bend on certain parts of their proposal, saying on State of the Union, “Of course there’s room for compromise, but you have to see the entire package.”