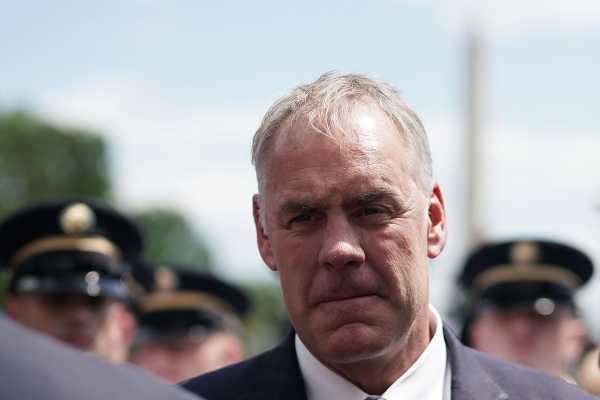 Political narratives, especially in popular fiction but often in journalism as well, are built around uncovering hidden wrongdoing. The basic model of a compelling political story is: There is some sort of corruption afoot, it is discovered and exposed to the public, and the perpetrator is shamed or punished.

But what if the corruption isn’t hidden at all, but right out in the open? What if, when it’s identified, the perpetrator doesn’t apologize, or demonstrate any remorse or shame, and there’s no punishment? What then?

We don’t really have good narratives around what happens in that situation, which is why the Trump administration so often leaves us sputtering and gawking. It can’t just be a motley collection of incompetent grifters, each misruling their own little fiefdom, trying to stay in their boss’s good graces, succeeding less through wits than a congenital lack of shame and the unstinting institutional support of GOP donors. Can it?

It is difficult to accept, especially for Washington’s establishment, which is so accustomed to normal politics and conventional political narratives. It’s so grubby, almost too ridiculous for a great country like the United States. It would be implausible as fiction. There must be something more. 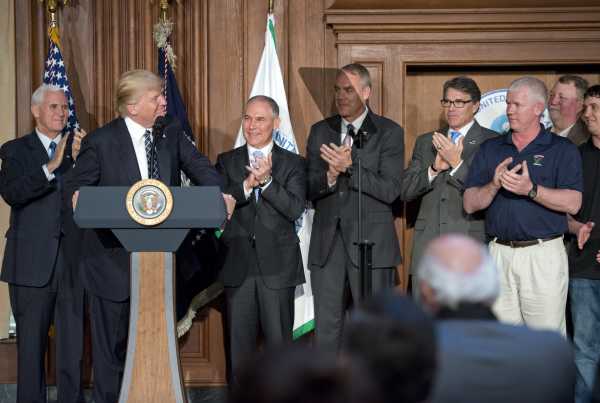 But there isn’t. It’s incompetent grifters all the way down.

To illustrate that point, let’s highlight a recent episode, which didn’t get a ton of press but is nonetheless a perfect parable for our times.

The Department of Interior oversees $5.5 billion in spending that goes to nongovernmental groups; a big chunk of that is scientific research.

Last week, Mallory Pickett at the Guardian reported that several US climate scientists are seeing their research proposals delayed and delayed, to the point that they are having difficulty hanging onto resources.

“The uncertainty that we have is compounding with every week,” Dennis Ojima, an ecosystem science professor at Colorado State University, told Pickett. “For teams that are trying to initiate new research it’s difficult to get the graduate students and postdocs lined up.”

It turns out that, since the beginning of 2018, all scientific research is being funneled through a political review process. Specifically, the Department of the Interior is reviewing all scientific funding requests above $50,000 to ensure that grants “better align with the administration’s priorities.”

Why not leave reviews to DOI staff, as has traditionally been done? Because Interior Secretary Ryan Zinke views career staff, many hired under President Barack Obama, untrustworthy.

“I got 30 percent of the crew that’s not loyal to the flag,” he told an oil industry group in 2017. Career staff may view themselves as public servants, loyal to principles that transcend partisanship, but that’s not the kind of loyalty Zinke wants.

In June, 12 Democratic senators sent Zinke a letter asking, more or less, WTF? They expressed “deep concern” that an unprecedented layer of political review “weakens confidence in the integrity of the DOI review process and at the very least, creates the appearance of improper political interference in program decisions that should always be merit-based.”

DOI never responded to the letter, so we don’t know whether the small claque of political appointees reviewing scientific research is overwhelmed or deliberately slow-walking climate change research. Perhaps some mix of both.

But see, that’s just workaday corruption of independent agency processes to serve ideological ends. It’s not savory, but it’s not that different from the kinds of things, say, President George W. Bush’s Interior Department used to do.

Workaday corruption is not enough for this administration. It’s got to verge on performance art, to keep you gaping until the next thing happens. So here’s the Trumpian punctuation on the whole affair. 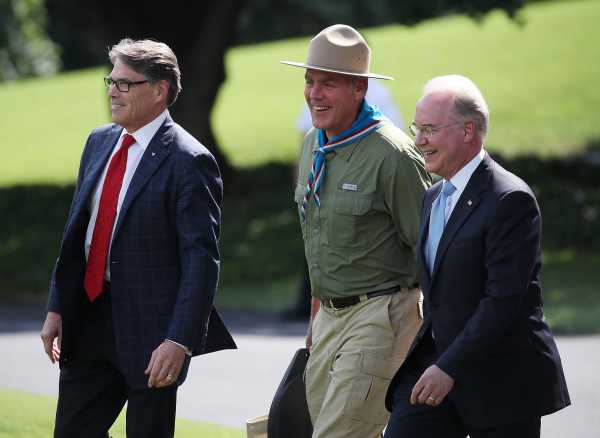 Research proposals are being reviewed by Zinke’s old buddy Steve

The person who has been assigned to lead this political review of research proposals is Steve Howke, technically a senior adviser to Acting Assistant Secretary of Policy, Management, and Budget Scott Cameron at DOI.

If you are the naive sort, not yet thoroughly given over to cynicism, you might reasonably ask: What sort of qualifications does Howke have to be reviewing scientific research proposals? Is he a scientist himself? A researcher? A staffer familiar with grant proposals? Someone who has literally ever worked in government?

Ryan Zinke’s claim that “environmental terrorists” are to blame for wildfires, explained

Ha ha, no. Howke is — and I am not making this up — an old football buddy of Zinke’s. He went to school with Zinke from kindergarten through Whitefish High School in Montana, where they played on the team together. He considers Zinke a “close friend” and supported his campaign for House.

And as for his qualifications, “Howke’s highest degree is a bachelor’s in business administration,” Pickett reports. “Until Zinke appointed him … Howke had spent his entire career working in credit unions.”

Imagine, if you will, the chain of events. At some point, Trump made it clear to Zinke that he wanted the department to fund fewer Obama-sounding things. Zinke didn’t feel like he could trust DOI staff to implement Trumpian priorities, so he needed someone else. And he thought, “I wonder what Steve’s up to these days!”

Dimwitted, cartoonish corruption is oddly difficult to reckon with

Again, if I had pitched something like this as dystopian fiction five years ago, I would have been laughed out of the room by any competent editor.

When horrible things happen to people, to land, to international alliances and longstanding norms of political conduct, it feels like the story behind all that pain and damage ought to be dramatic. It ought to have some depth — subterfuge, secret meetings, grandiose evil schemes.

It is offensive to both our moral and aesthetic sensibilities that the story behind our woes should be so small and petty, so very … dumb. Scott Pruitt building a $43,000 secure phone booth and only using it once. Steven Mnuchin’s $1 million in travel costs, including $800,000 to fly around on military jets. Zinke hiring an old high school football buddy to implement scientific research priorities.

It’s the kind of corruption that belongs in a movie by the Coen brothers, not shaping US policy. But that’s where we are.