President Joe Biden on Wednesday enacted legislation that will expand the Department of Veterans Affairs, providing health care support to millions of veterans — as well as their families and caretakers — who were exposed to toxic burn pits.

Known as the PACT Act, the package grants more time to enroll in VA-provided care for veterans exposed to the toxins while serving in Iraq and Afghanistan, according to the White House.

"This is the most significant law our nation has ever passed to help millions of veterans who are exposed to toxic substances during their military services," Biden said in remarks during the bill signing ceremony in the White House's East Room.

The legislation simplifies how the VA determines if someone's service put them at risk, which the White House and veterans say is often difficult to prove on an individual basis.

Some veterans or their survivors diagnosed with one of 23 specific conditions will no longer need to prove a direct service connection, per the new law, which also invests in toxic exposure research, among other things. 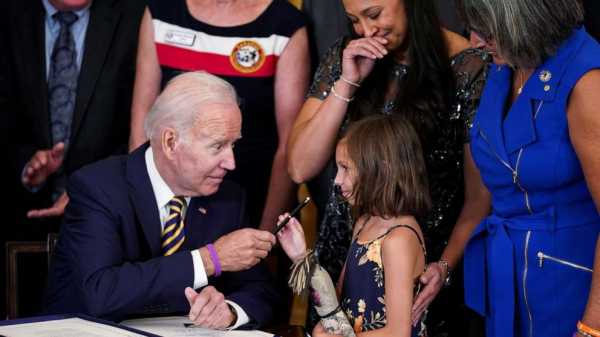 Burn pits in Afghanistan and Iraq could be "the size of football fields," Biden said at the signing. The U.S. military used them to incinerate waste from operations there, which included "tires, poisonous chemicals, jet fuel and so much more," he said.

The issue is personal for the president, who for years has wondered if late-son Beau's brain cancer stemmed from exposure to burn pits during his deployment in Iraq.

"When they came home, many of the fittest and best warriors that we sent to war were not the same. Headaches, numbness, dizziness, cancer. My son Beau was one of them," Biden said.

But the PACT Act, which the president called on Congress to take up last year, almost didn't make it to his desk for a signature.

The proposal had faced uncertainty in the Senate after some Republican lawmakers changed their minds, voting against ending debate on the bill after they voted in favor of it weeks earlier — a convoluted timeline because a change to the text in the House required a re-vote.

It ultimately passed the Senate a second time, last Tuesday, with 11 Republican holdouts after protesters, many of them veterans, spent days advocating for their cause in front of the Senate steps. (GOP lawmakers had cited concerns about what they said were Democratic spending maneuvers bundled in the bill.)

Among the demonstrators urging PACT's passage was actor and comedian Jon Stewart, who himself protested for hours outside the Capitol and walked the halls of Congress to meet with senators last week. He attended the bill signing Wednesday morning.

"What you've done matters," Biden told Stewart, who received a standing ovation. "It really, really matters … And we owe you big." 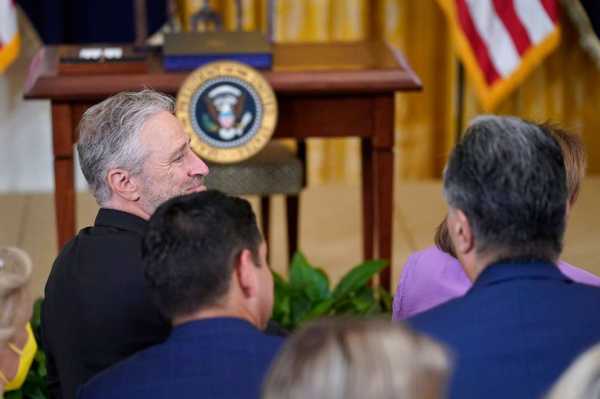 Activist and entertainer Jon Stewart arrives for the signing ceremony of the “PACT Act of 2022” with President Joe Biden in the East Room of the White House, Aug. 10, 2022.Evan Vucci/AP

Some veterans and survivors who lobbied on the Hill last week also joined Biden and lawmakers at the signing.

Biden spoke with several of them before he left the East Room, handing out challenge coins to some, embracing others and thanking them for their service.

"This law is long overdue, but we finally got it done together," he said.