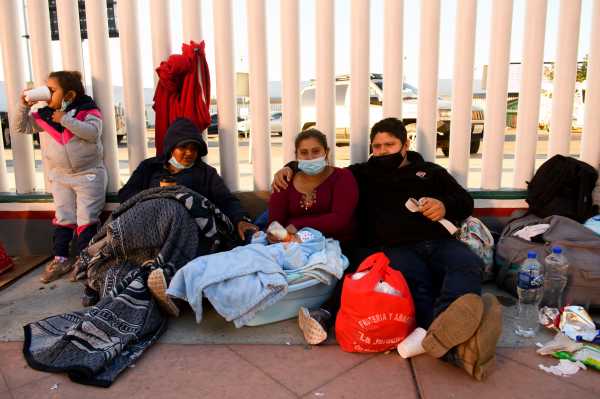 The Biden administration has begun allowing tens of thousands of asylum seekers who were forced to wait in Mexico for a chance to obtain protection in the United States under a Trump-era program to cross the border.

Some 28,000 asylum seekers — primarily Cubans, Hondurans, and Guatemalans — have active cases in former President Donald Trump’s Migrant Protection Protocols (MPP), which became known as the “Remain in Mexico” program. It is one of many interlocking Trump-era policies that, together, have made obtaining asylum and other humanitarian protections in the US next to impossible.

On Friday, the Homeland Security Department announced that it had allowed 25 of those asylum seekers to cross the US-Mexico border at the San Ysidro port of entry, which connects the city of Tijuana with San Diego, California. International organizations, including the United Nations Refugee Agency (UNHCR), had registered the asylum seekers in advance and given them an appointment to show up at the border during which they verified their eligibility to enter the country on a US Customs and Border Protection mobile app and tested negative for Covid-19.

“Today, we took the first step to start safely, efficiently, and humanely processing eligible individuals at the border,” Homeland Security Secretary Alejandro Mayorkas said in a statement on Friday. “It is important to underscore that this process will take time, that we are ensuring public health and safety, and that individuals should register virtually to determine if they are eligible for processing under this program.”

Another 25 asylum seekers arrived at the port of entry on Monday to be processed.

DHS has said that the asylum seekers, once admitted to the US, will be placed in “alternatives to detention” programs, under which they are released into the US but monitored, usually by a social worker, in an effort to encourage them to show up for their immigration court dates. Such programs are humane and relatively low cost compared to immigration detention.

Ports of entry in El Paso and Brownsville, Texas — which is directly across the border from one of the largest encampments of asylum seekers in Matamoros — were expected to start processing people subject to MPP this week, but CBP said Monday that certain “operational considerations” specific to those ports could delay that plan.

They will start by processing 25 migrants daily and eventually ramp up to 300 per day, but DHS has yet to publicly commit to a date when that will occur.

“Many of them are now going to be in dignity with their families here in the US as they await their cases to be heard,” said Rep. Nanette Diaz Barragán (D-CA), who was scheduled to meet with border officials at San Ysidro and nonprofits aiding migrants on both sides of the border on Monday.

Asylum seekers who have not yet been given an appointment to be processed at the border say that they remain “anxious and worried” about ensuring that they get a spot in line.

While waiting in Mexican border cities, they remain at risk of extortion, kidnapping, and rape at the hands of cartels and other criminal entities. Some have found housing in shelters, hotels, or rooms for rent. But for others, only colorful tents and tarps stand between them and the elements. They continue to rely on volunteers for basic necessities and medical care.

An online platform created by UNHCR that allows migrants subject to MPP to register for an appointment at the border has been a source of confusion. Migrants have to fill out a four-page virtual form, including information from their court documents, that UN officials will use to identify which migrants are most vulnerable and should be prioritized for processing. Among other factors, they will take into consideration a migrant’s age and health, as well as whether they are victims of crimes or trauma or single mothers with children.

The Monitor’s Valerie Gonzalez reported that the site went live at noon on Friday, but migrants quickly encountered difficulty registering due to “weak internet reception, an inundation of web traffic, and unaccommodated disabilities.” On Monday, migrants in Matamoros said they had been unable to access the site since 10 pm on Sunday night, and the UNHCR phone line was continuously busy.

MPP is one of many barriers to asylum erected under Trump

More than 71,000 migrants have been subject to MPP over the lifetime of the program as of the end of January, according to new data from the Transactional Records Access Clearinghouse at Syracuse University. The vast majority are not being represented by a lawyer, and less than 2 percent of those whose cases have been completed have received some form of protection in the US.

Before the pandemic, asylum seekers would often have to wait months for a hearing. But last March, the Trump administration suspended all their hearings indefinitely.

Faced with the prospect of waiting many months in Mexico to be called in for their court dates in the US, many migrants who were enrolled in MPP decided to return to their home countries and were ordered deported in their absence. Biden administration officials have signaled that they also intend to identify those people and admit them to the US for a chance to seek protection.

President Biden announced last month that the US would stop enrolling people in MPP, but he stopped short of ending it entirely. He had also promised on the campaign trail to “surge humanitarian resources” to the border, including asylum officers who could conduct an initial screening of migrants’ claims for protection, and ensure that US Citizenship and Immigration Services’ asylum division takes the lead on processing their cases in order to ease the burden on the immigration courts.

Biden’s decision to start processing asylum seekers subject to MPP signals that he is taking a more compassionate approach to the border. But some immigrant advocates have argued that he isn’t acting quickly enough to reverse Trump’s policies, including a Centers for Disease Control and Prevention order that has allowed the US to turn away the vast majority of migrants arriving at the border on pandemic-related grounds. White House press secretary Jen Psaki has said the CDC order will remain in place for now.

Poll: A majority of Americans think teachers should be vaccinated before reopening schools