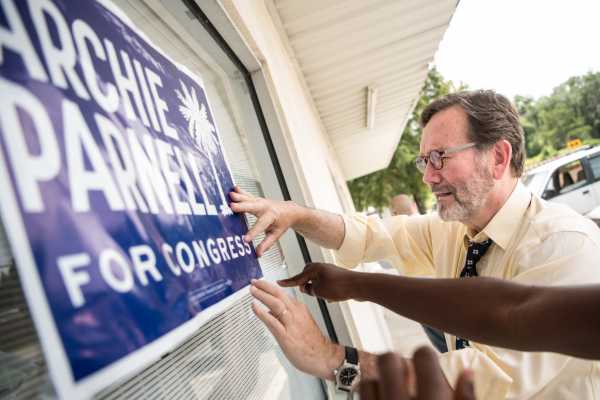 Politicians across the country are increasingly being held accountable for a whole range of bad behavior, including sexual misconduct and physical abuse. But in one South Carolina district on Tuesday night, a Democratic candidate who admitted to brutal physical abuse of his ex-wife in the 1970s had no problem winning his congressional primary.

Archie Parnell sailed to victory with 60 percent of the vote in the state’s Fifth Congressional District, which includes a slew of rural counties and extends to the suburbs of Charlotte, North Carolina. He’ll face incumbent Rep. Ralph Norman in the fall. His candidacy has Democrats worried, drawing parallels for some to Alabama Senate candidate Roy Moore, who refused to step down after allegations of sexual assault.

Parnell has been a candidate in the district before: He ran against Norman in a 2017 special election after the seat was vacated by Mick Mulvaney, now the head of the Office of Management and Budget and the Consumer Financial Protection Bureau. Norman ended up winning by a 3-point margin — surprisingly slim for a district that was considered a solid bet for Republicans — prompting Democrats to eye the district as a potential target for the midterms.

This past May, the Charleston Post and Courier reported on Parnell’s history of abuse as detailed in his divorce papers. In those documents, Parnell’s ex-wife described the candidate breaking open a glass door with a tire iron and going on to strike her repeatedly, an act Parnell later confirmed. Parnell’s ex-wife said she ultimately had to obtain a restraining order against him.

Parnell’s candidacy further complicates things for Democrats, who have been promoting women as candidates while the party wrestles internally with issues like sexual misconduct. National and state Democrats, including the Democratic Congressional Campaign Committee and South Carolina Democratic Party Chair Trav Robertson, have already denounced Parnell and called on him to drop out.

Parnell has sought to emphasize that he’s changed since that incident, including in a video released last week: “I am not that same person,” he said. “If I withdraw, I would be telling anyone who makes a terrible mistake that that one terrible mistake will define them for the rest of their lives.”

“I acknowledge what I did 45 years ago was wrong and I have to face that,” Parnell said on Tuesday.