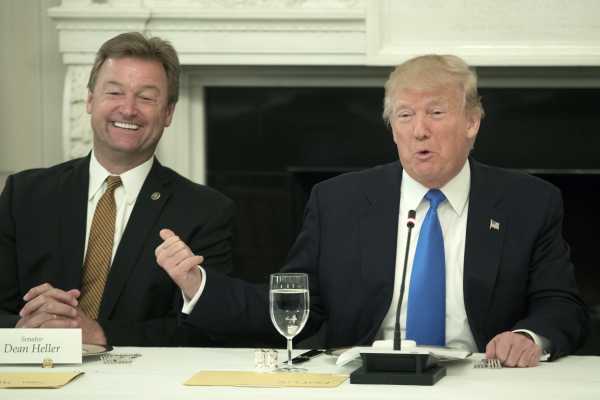 President Donald Trump isn’t popular in the state of Nevada — and it looks like it’s going to be a problem for Sen. Dean Heller, the most vulnerable Republican senator up for reelection in 2018.

A new independent poll shows Heller neck and neck with his Democratic challenger Rep. Jacky Rosen; 39.7 percent of voters support Heller compared to 39.3 percent who support Rosen, according to a mid-April survey from the Mellman Group, the Nevada Independent reported. Twenty-one percent of voters say they are still undecided. The poll surveyed 600 likely voters from April 12 to 19 and has a 4 percent margin of error.

Trump could be a real problem for Heller. After a year of White House scandals, and legislative flubs on health care and immigration, Trump has a 39 percent favorability rating in the state. Almost 56 percent of respondents said they had an unfavorable opinion of the president. As Vox’s Andrew Prokop explained, the incumbent president’s party historically has been disadvantaged in midterm elections. And Trump’s historic unpopularity is already signaling a possible blue wave in 2018.

Heller is the only Republican senator running for reelection in a state Hillary Clinton won in 2016. Since Trump took office, Heller, who is known in the Capitol for evading the press, hasn’t tried to distance himself from the White House much at all. He has voted with Trump 91 percent of the time and has only broken with him on trade and guns.

“I’m not going to sit here and criticize him,” Heller told Politico when asked about Trump’s fleeting bipartisan push for gun control. “Because everything else he’s touched, like this economy, has been just incredible. So, I don’t want to get too far in front of some of these policies.”

To be sure, Rosen still has a lot of work to do to be competitive in November. The April poll found that she lags Heller substantially in name recognition. Only 8 percent of respondents said they’d never heard of Heller, whereas 34.2 percent were unfamiliar with Rosen. And Heller is still polling better with independents in the state.

However, it’s clear Democrats are enthusiastic to come out and vote — an energy that has made Heller’s bid for reelection the most difficult Republican campaign this year.