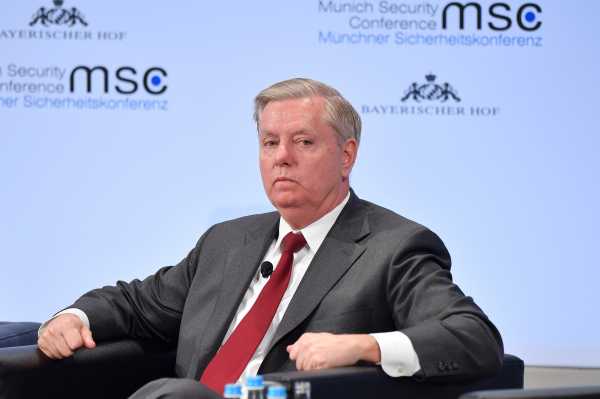 Republican senators are ready to wage a war on drugs to combat the opioid crisis in the country — despite decades of evidence that this approach simply will not work.

On Wednesday, the Senate Subcommittee on crime and terrorism discussed the bill that would lower the threshold required to introduce mandatory minimum sentences for trafficking and distribution of fentanyl-an opioid that was more associated with deaths from overdose in recent years. The bill relies on Sens. John Kennedy (R-La), Tom cotton (R-AR), Lindsey Graham (Republican, South Carolina), bill Cassidy (R-La), Dean Heller (R-n), Ben Sasse (R-ne) and Orrin hatch (R-ut). It is not clear, although if it has support — in particular, the support of both parties that he needs to pass the Senate.

The argument in favor of the bill is the same as the argument for “tougher penalties” policy of the past: the toughening of criminal punishment will help deter drug dealers. That deterrence can help the senators believe, to end the opioid epidemic.

“There should be some concept that if you’re on the hook and you put fentanyl in the stream of Commerce — I mean the drug trade to feed your habit, then You are not only a public safety danger, it’s just wrong,” Graham said Wednesday at a Senate hearing. “We will make people pay a big price for the administration of fentanyl is not wasted on drugs needs to be consciously. And it will not cure the problem, but I think it is a necessary step in a comprehensive strategy.”

During the hearing the senators argued that the current law is one-sided. They argued that it is currently possible to have a lot of fentanyl — tens of grams — for the purpose of distribution, without causing a mandatory minimum that would kick in Over a much smaller amount, equivalent to a lethal dose of other banned substances. (For more on the hearing itself, Ames Grawert with the Brennan Center has a useful thread on the Twitter penetration in hearing more detail.)

Based on empirical data and history, Senate Republicans will not work. Consider: we had a “tough” policy on illegal drugs for many decades. However, the country still mired in the worst crisis of a drug overdose in U.S. history, drug overdoses killed for the time of nearly 64 000 people in 2016 and preliminary data according to which in 2017 is even worse.

As Graham has suggested, the idea of “fighting crime” approach to the drug problem is higher prices for drugs. It’s actually a bit literally: part of the thinking is that if you deal with drug dealers and traffickers, you can reduce the available supply of illicit substances, making these drugs more expensive. Which in turn makes the drug more expensive means fewer people will be able to initiate or continue to use drugs.

This concept, however, falls apart in reality. As previously said, mark Kleiman, drug policy expert at the Marron Institute at NYU, to me, “we did an experiment. In 1980 we had about 15,000 people in jail for drug trafficking. And now we are behind bars for drug trafficking approximately 450,000 people. And the prices of all essential drugs is significantly reduced. So if the question is to do with longer maturities lead to higher drug prices and therefore less consumption of drugs, the answer is no.”

One of the best studies supporting this review of research 2014 Peter Reuter University of Maryland, and Harold Pollack at the University of Chicago. They found that while just banning drugs in some way raises their prices, there is no evidence that the toughening of punishment or harsh efforts to eliminate supply more effectively manage access to drugs and alcohol or drug abuse than lighter penalties. So increase the severity of punishment doesn’t do much if anything to slow the flow of drugs.

This applies in a broader sense, not only of drug-related offences. Studies have suggested that tougher penalties do not do much to prevent crime. As the national Institute of justice concluded in 2016, “the research clearly shows that the chance of being caught is a much more effective deterrent than even the draconian punishment. … Studies have found evidence that prison may exacerbate, not reduce, recidivism. Prisons themselves could be schools for learning to commit a crime”.

In other words, the more the certainty of punishment can deter crime, and gravity — in a long time, which expose people to prison for long periods of time — in fact may do worse than the crime.

More severe punishment can also be counterproductive, punishing people who need drug treatment, not incarceration. While many of these efforts are not framed as going after drug dealers and human traffickers, the line between who is a dealer or trader and the User are often blurry. In 2017, the Bureau of justice statistics, for example, found that “about one third of persons who have committed drug crimes (30% of state inmates and 29 percent of prison inmates) said they had committed crime to get drugs or money for drugs.”

But Graham suggested that the castle to opioids is a feature, not a bug claiming that if you “hooked” and trafficking of fentanyl “to feed your habit,” you must be punished. While this can inhibit some drug dealers, it misses the root problem — addiction — what you need to do. (For example, most prison systems do not offer adequate access to treatment for prisoners.) This is one reason, according to experts, to combat the opioid crisis approaches to public health, not criminal justice, is required.

If you ask the experts what to do with the opioid crisis, the first response you usually get more treatment, in particular, greater access to anti-addiction drugs like methadone and buprenorphine. You will also hear About the measures to reduce harm, such as increasing access to opioid overdose antidote naloxone. And you could hear about efforts to reduce other sources of supply, particularly the root causes of addiction, such as mental health problems and stagnation in socio-economic conditions.

More prisoners almost never comes and if it is, it’s usually in a negative light. As previously said to Sarah Wakeman, medical Director of Massachusetts General hospital disorders of substance use initiative, to me, “the increasing criminalization is not only ineffective but actually harmful” is to promote the stigma that can prevent people from seeking help from addiction.

In addition to the potential harm more stigmatized, the reality is that lock more people costs money. In a world of limited resources, limited resources that must go into politics, backed by evidence and expert — not an approach likely will not work and especially one that is clearly not worked in the past.

As the experts want to spend limited amount of money? Earlier this year, Josh Katz at the new York times put it to the test: he asked 30 experts, as they spend five years and $ 100 billion on opioid epidemic. On average, experts said that 47 percent of the money should go to treatment, 15 percent to services harm reduction, and 27 percent of demand (with a focus on “community development” to address the root causes of addiction).

Drug treatment of money in particular will go to a serious problem: according to 2016 report of the surgeon about 10 percent of people in the USA with a drug use disorder receive specialty treatment which the authors of the report explain the lack of access to medical care. And even when treatment is available, other Federal data show that less than half of facilities that offer opioid drugs dependence as methadone and buprenorphine, which are considered the gold standard for the treatment and research shows that to reduce mortality among patients with opioid dependence by half or more.

Meanwhile, experts said that only 11 percent should go to proposals that may include such punitive efforts in the area of criminal justice that the Senate bill will be for fentanyl. The bulk of even this limited money supply, however, went to monitor the prescription and reduce diversion of opioid painkillers, for example, invests more money in drug return initiatives to discard unused opioids. So even this Bank is more than the required minimum.

It should not be too surprising. At the moment, it has become a cliché in the opioid epidemic, experts and officials say “we can’t arrest our way out”. But even when people say again and again, Republican senators are pushing to lock up more people, even those who are dependent and need treatment as part of their efforts to end the crisis of opioids.