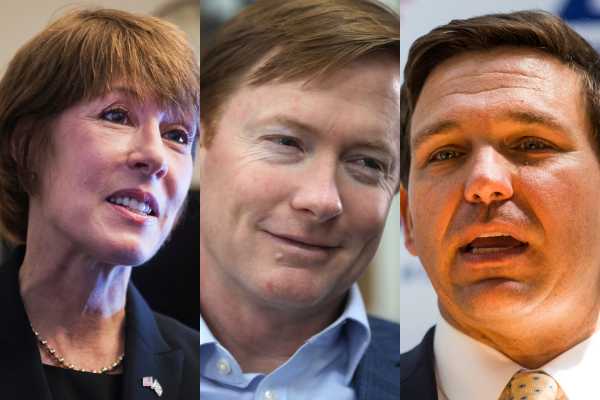 The general election to succeed Florida Gov. Rick Scott will be one of the nation’s most important in an increasingly conservative swing state. Election forecasters rate it a toss-up. The preliminary polling shows the race within low single digits.

One Florida political observer said that that Republican Ron DeSantis — who “doesn’t even pretend to have a reason for being governor other than he was endorsed by [Donald] Trump” — is expected to face off against Democrat Gwen Graham, a qualified center-left daughter of a popular former Florida governor and senator who is “not great on the stump,” in the November general election after Tuesday’s primaries.

“The election is going to be about Donald Trump, which is not very original,” Mac Stipanovich, a longtime Republican operative who offered his assessments of DeSantis and Graham, told me. Floridians are persistently and evenly split on the president.

And with Florida’s congressional redistricting coming up in 2020, when the governor elected this year will have veto power, the reverberations of the 2018 election could be felt in Washington for the next decade and longer. Florida is also one of the states that refused under GOP control to expand Medicaid under Obamacare, leaving hundreds of thousands of its poorest citizens without health coverage, an issue that is a clear dividing line between the Democratic and Republican candidates in the governor’s campaign.

The anticipated general election match-up is an establishment Democrat and a Trump-backed candidate, a dynamic found in many of 2018’s most important midterm elections. It’s gonna be close.

DeSantis has been in the US House since 2012; he’s had his eyes on higher office for a while, originally planning to run for Sen. Marco Rubio’s seat in 2016 before the senator decided to reclaim his old spot after dropping out of the presidential campaign. DeSantis voted for the GOP tax law and Obamacare repeal in the House last year. FiveThirtyEight estimates that he has voted with Trump 94 percent of the time.

The congressman has shamelessly sought Trump’s approval. One of his first campaign commercials showed him and his daughter building a model of the president’s wall and ended with his young son in a “Make America Great Again” onesie. DeSantis called Trump and asked for his endorsement.

“He’s a Trump hologram,” Stipanovich, a self-described Never-Trump Republican, said. “There’s just nothing to DeSantis other than the fact he was endorsed by Donald Trump.”

But Trump is still popular with the Republican base, of course, which has put Putnam, DeSantis’s most credible challenger and a former congressman himself, in a bit of a bind. “It’s hard to be too far to the right,” Stipanovich said of the primary electorate.

Putnam is undoubtedly the establishment choice: While DeSantis has Trump and Sean Hannity, Putnam has the state chamber of commerce as well as several Republican leaders in the state legislature. He has tried to walk a fine line on Trump: On the one hand, longtime Trump booster Pam Bondi gave Putnam her endorsement and said he would stand with the president; then again, more recently, Putnam has called DeSantis Trump’s “puppet.”

“He basically turned his back on his career and his legacy for the Trump voters and got kicked in the teeth for his troubles,” Stipanovich said. “He’s certainly not backed away from Trump, but he’s not really talking about that anymore.”

The polling shows a race too close to call with much certainty: DeSantis leads Putnam by 5.2 points on average, according to Real Clear Politics, but the most recent surveys show a one- or two-point outcome.

Gwen Graham, who served one term in the House for Florida’s second congressional district, has held a steady lead in the Democratic primary polling: Real Clear Politics puts her average lead at nearly 8 points. It would be a bit of a shock if she is not the Democratic gubernatorial nominee after Tuesday’s primary election.

Graham is positioning herself as a check on Florida’s Republican-controlled legislature — which has been that way for years — and emphasizing her family’s history in the state: Her father, Bob Graham, was Florida’s governor and a United States senator for nearly 30 years. She has attracted the most endorsements, getting a nod from Sen. Kirsten Gillibrand (D-NY) and House Democratic Whip Steny Hoyer, among many others.

Three men — and, remember, Democratic women have performed very well in primaries where their competitors are men — are trailing a little behind Graham. Tallahassee Mayor Andrew Gillum is trying to energize the left, receiving support from Bernie Sanders and Tom Steyer’s NextGen group while endorsing single-payer health care.

Philip Levine has a few endorsements of his own and a record of public service in the state’s biggest collection of Democratic votes, the Miami area. The surveys have shown him to be running the closest to Graham, who had built and maintains a steady lead but faced attacks from Jeff Greene in particular over her family’s business and the environment.

That has actually given some observers in the state the impression that Gillum, the young, exciting black mayor, is moving up — though it still might not be enough on primary day.

“Gillum is definitely rising,” Steve Schale, a Democratic operative in the state, told me. “When you have four people in the race, typically the one who is rising at the end is the one not being attacked.”

Stipanovich described Graham as “a center-left Democrat, not a left-wing headbanger.” She has, for example, declined to endorse a single-payer health care plan.

That has led to the concern, he said, that Graham “won’t motivate the base” in the general election.

But that’s where a Trump-lite opponent like DeSantis could come in handy. Trump is nothing if not divisive: Polling has shown that Florida has generally felt more warmly toward the president than some other swing states, but a recent Florida Atlantic University survey found his job approval to still be just 43 percent, versus 45 percent disapproval.

A Republican who puts his son in a MAGA onesie and promises to block sanctuary cities while passing anti-abortion and pro-gun legislation is also likely to fire up progressives in a year they’re already primed to turn out.

“I find it hard to believe if DeSantis is the nominee, the left will stay home,” Stipanovich said.

But the Florida governor’s race has earned its toss-up status. The polls show Graham leading DeSantis by three or four points, but trailing Putnam (if he were to top DeSantis in the Republican primary) by one or two points.