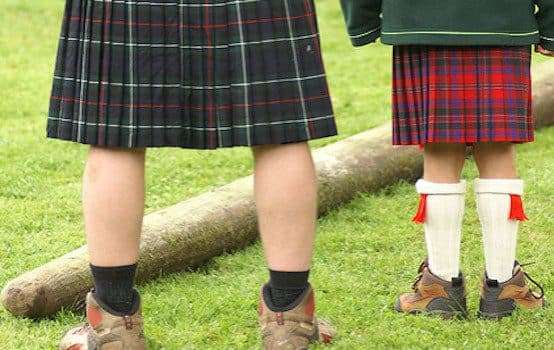 This fall, as story after story revealed sexual misconduct at the highest levels of American government, culture, and media, I was invited to address the St. Andrews Society of Savannah, Georgia, an all-male charitable and social organization formed in 1737 whose membership is comprised solely of those of Scottish lineage. Once a year, approximately 1,000 of these men gather for the feast of St. Andrew. The event is widely regarded as a manly affair. A fifth of bourbon and another of scotch whiskey sit at every place setting. Haggis is served to all. Kilts are de rigueur. A man in chivalric dress recites the poetry of Robert Burns whilst brandishing a saber and standing in front of a fog machine. Most of the serving is done by women.

What follows are my remarks to the loud, raucous assembly of drunken, kilted men.

I want to start off by assuring everyone that my Scottish lineage is well documented. My people belong to Clan Mackay, an ancient tribe from the Highlands, and according to a recent home DNA test, I am 65 percent Scottish and 35 percent distilled liquor.

I am honored to report, also, that this isn’t my first public appearance in women’s clothing. I attended a small Presbyterian college with a color guard who wore the full Scottish regalia, and I’ll never forget the thrill of wearing my first tartan. In the changing room, one of the upperclassmen said, “You know what a real man wears underneath a kilt, don’t you?”

“Nothing,” he said. “Except courage.”

What is courage? Is it the ambition to make more money than your neighbor? The talent to kill a man in defense of an abstraction? The ability to tweet aggressively?

What has happened to manhood?

We have affairs. We leave our spouses. We sexually assault anything that moves, and probably things that don’t move, also. When I was a boy, you know what we assaulted? Trees, to make firewood, with chainsaws!

Do you know where I recently obtained firewood? The grocery store! Six or seven little pieces wrapped in cellophane like an egg salad sandwich. It’s embarrassing.

Women are gaining on us in every major profession, and they now make up the majority of pharmacists in America. Did you know that? They can poison us all, if they want, and they probably do, according to what I read in the papers. Did you know that more women than men are enrolled in college? In 1954, 96 percent of American men worked. Today that’s down to 85 percent, and the number will likely keep dropping. What does all this mean?

It means I can Google things!

One thing you can’t Google is the definition of a man.

And what is good, men? According to the prophet, it is “to do justly, and to love mercy, and to walk humbly with thy God.”

My father was a doer of justice, but he was not always a lover of mercy. For that quality, I must look to my grandfather. His friends called him Monk. There will never be a statue of Monk, nor a Wikipedia page. There shall be no societies formed in his honor, as there are for St. Andrew. He didn’t wear a kilt. For him, kilt was a verb.

“Where’d you get this deer meat?”

Monk was married to my grandmother for 70 years, and for most of that time, she was wearing a hairnet. Did he leave her? Did he run off for a younger, sprier woman, as so many of us seem to want to do? No, sir. He drove her to the beauty parlor every Saturday to get her hair set for church. Seventy years of hairnets, gentlemen!

That’s what a man does, right there.

Today, some of us might complain about the hairnets, but not Monk. He had real things to complain about. The Great Depression. Droughts. Heat waves that killed his cattle. Did Monk take to Twitter and rail at God and the liberal media about the drought? No, sir. You know what Monk did? His cows all died, like a real man’s cows.

I don’t even know where my food comes from. The other day, I sliced a tomato for a sandwich. Who grew it? Was it American? An immigrant tomato? Did it have Russian ties?

Monk grew his own squash, corn, butterbeans, peas, greens, peppers, tomatoes. If you asked me to make a squash, I wouldn’t even know where to start. Do you need glue? Food coloring? Is it paper mache? I don’t know.

Listen, I get it: Food is plentiful and cheap today, this much is clear, just based on the tightness of my kilt. I know we can’t all be farmers. A modern man must adapt to changing economies, but I would submit to you that Monk proved as adaptable as any of us. When the mechanization of agriculture disrupted his farming of cotton, he operated a dairy, and when automation decimated that industry, he ran traps for fox and beaver, and when fur bottomed out, he got a factory job, and when American manufacturing faltered, he started catching and selling turtles for pets and dinner. Turtles, men! So don’t tell me that Monk couldn’t have thrived in any economy, in any nation. They have turtles almost everywhere.

I wish my grandfather was still with us. I’d like to see him on Twitter. He had the spine for it. When I am unfollowed on social media by a stranger for tweeting something insensitive about disabled unicorns, I get upset. I do. It hurts.

But not Monk. Nothing upset Monk.

He knew the art of collegial debate. He would tell you what he believed about farm subsidies or nuclear disarmament, and when you voiced your disagreement for his political point, he would simply ignore you and ask if you wanted another biscuit, which of course you did. Who doesn’t want another biscuit?

“Oh, those were simpler times,” I can hear you saying. “Back when a man could solve geopolitical questions with food.”

But were the times simpler? My grandfather grew up amid lynchings. In his home of Tate County, Mississippi, he saw black men pursued with hounds by lawless mobs and hanged for crimes they did not commit. His neighbors across the fence-line were a black family, and when they were ill, he called on them with food and prayers, and when he or my grandmother were ill, they paid him in kind. How instructive for a young boy like me, from the very heart of American racial evil, to see this bold witness from his white grandfather?

Of all the memories of Monk, I remember one most vividly, when my parents were out of town and he took my brother and me to the swimming hole.

It was a wide sandy creek. You could see to the bottom in places, little bream darting in clusters. Monk fished upstream, as we played down. Soon enough, our horseplay turned into horse-fighting, when my brother and I attempted to express our fraternal love by drowning one another. Monk told us to cut it out, but we didn’t listen.

We had been whipped many times, at school, at home, never with fists or open palms, usually with items purchased at hardware stores, flyswatters, canoe oars, fan belts.  But Monk had never whipped us. He was the peacemaker, the Good Cop to my father’s Bad, and so we ignored him and commenced to murdering each other again, as quietly as possible.

And then the water turned dark with his shadow.

“Boys, get out,” he said, prying the leather belt off his trousers.

I felt such grand shame, that our behavior had made Monk no longer the lover of mercy but the doer of justice. I said a prayer, and looked up to see a miracle: Just as he raised his hand to whip me, over his shoulder, poking through the leaves, I saw the face of an angel.

No, not an angel.

It was Monk’s son. My father, Pop. He stepped into the clearing.

“We just drove in,” Pop said. “I seen the truck and reckoned you all was swimming.”

Bird and I waited for Monk to explain our terrible malfeasance, but when I turned back to look at my grandfather, the belt was back in its rightful place, caged and quiet.

“We was just fishing a little,” Monk said.

We all drove back to the farm. Monk never said a word, from then to the day of his death.

In that moment, so very long ago, the just act would have been to punish my brother and me, and then to tell our father what we had done. Monk probably wanted to drown us both just for ruining his fishing. Justice would have felt good to him. It often does.

You read the papers, you check Facebook, and it looks as if today’s men want justice for others and mercy for themselves. But Monk did not choose justice. He chose mercy, for us.

In the New Testament, Paul exhorts his readers like some kind of juiced-up ball coach, “Watch ye, stand fast in the faith, quit you like men, be strong!” And then he says, as if in rejoinder to himself, quiet, calming, “Let all your things be done with charity.”

At this point in my life, where I am statistically halfway between birth and death, I have finally come to see that being a man has much less to do with chopping your own firewood or growing your own tomato and far more with this impossible marriage of strength and compassion that Micah and Paul write about.

Together, these impossible qualities are what made my grandfather a man, and all the good men who have come before us.

People want to know what a real man wears under the kilt.

He wears courage, and courage, I have come to see, is made of both strength and charity.

When you take off your kilt later tonight, gentlemen, I hope you see both.

Harrison Scott Key is the author of the memoir The World’s Largest Man, winner of  the 2016 Thurber Prize for American Humor. He has appeared in The Best American Travel Writing, Oxford American, Outside, The New York Times, Salon, Reader’s Digest and Southern Living. He teaches teaches writing at the Savannah College of Art and Design (SCAD) in Savannah, Georgia.