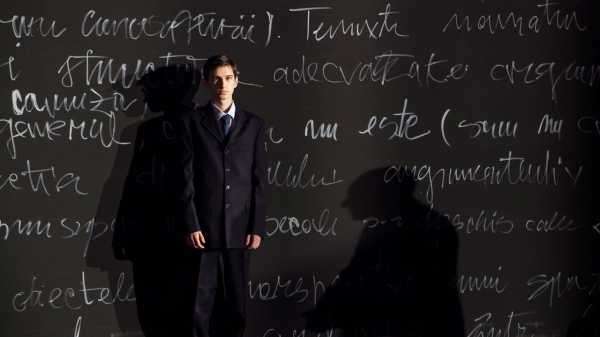 Between “A Cop Movie” and “Procession,” documentary-fiction hybrids are having a major moment, and there’s another remarkable one coming out in theatres this Wednesday: “Uppercase Print,” a Romanian film. Directed by Radu Jude, who’s best known for his fiction films (notably “Aferim!”and “Scarred Hearts”), “Uppercase Print” expands the practice of nonfiction filmmaking into ingeniously imaginative dimensions. The movie is centered on Jude’s filming of a play, which is performed in the conspicuously theatrical setting of a stage-like studio. Yet the play itself, by Gianina Cărbunariu, is a work of nonfiction, and an extraordinary, haunting one. She derives the text from the archives of Romania’s Communist-era secret police, the feared Securitate, to reconstruct a local event of grand symbolic moment that took place forty years ago in the Romanian town of Botoșani: the appearance of graffiti that demanded justice and freedom, insisted on the right to independent trade unions such as Poland then had (namely, the anti-Soviet union Solidarity), and made many other sharp but reasonable criticisms of politics and life in Romania.

This public political critique, of course, was a crime in the Soviet-satellite one-party regime of Nicolae Ceaușescu, and Cărbunariu’s play chronicles the extensive investigation that the incident sparked. The Securitate discovered that the perpetrator was a seventeen-year-old high-school student named Mugur Călinescu (played by Serban Lazarovici); he, his classmates, his family, and their acquaintances appear in Cărbunariu’s play based on the Securitate’s interviews with them—and, all the more, based on surveillance recordings of Mugur and his family that the government secretly made (by planting microphones in Mugur’s home, a story that’s integrated into the film). The details of the investigation have a hallucinatory quality, blending Kafkaesque labyrinths and Orwellian jargon, that captures the normalization of the state’s terrifying, soul-crushing machine of oppression.