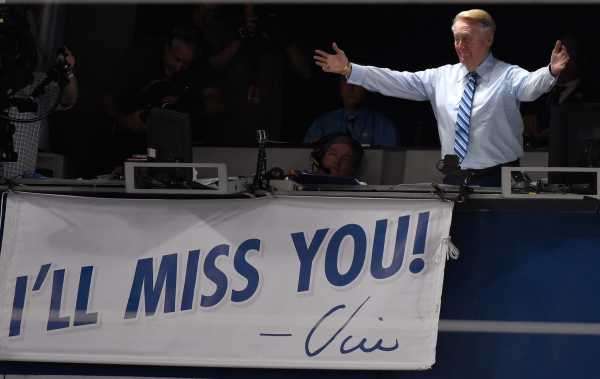 Vin Scully, the voice of Dodger baseball and the sport’s most iconic broadcaster, died yesterday at 94.

Scully started his career in New York, following the Dodgers from Brooklyn to Los Angeles and serving as the team’s radio and television broadcaster. He was famous for delivering long, colorful anecdotes, punctuated with pitch-by-pitch results. His conversational tone, seemingly boundless knowledge of players and their backgrounds, and appreciation for silence made the games he called unfurl like slow-burning novels, with a sense of direction and narrative.

Scully called some of baseball’s most iconic moments, from Hank Aaron’s record-breaking home run to Kirk Gibson’s hobbled walk-off shot in the 1988 World Series. His play-by-play coverage was sprinkled with bits of wisdom and memorable witticisms.

His broadcasting style suited both radio and television. His descriptions painted vivid pictures for radio listeners; his dramatic pauses brought television viewers to the field. Scully made his audience feel like both observers and participants in the three-hour drama that is a Major League Baseball game.

Scully called his last game for the Dodgers in 2016, and that year was awarded the Presidential Medal of Freedom by President Obama.

While he was reportedly in poor health following his retirement, Scully’s death took players and fans by surprise. Los Angeles third baseman Justin Turner said Scully “was the Dodgers,” adding that there were “a lot of heavy hearts” in the dugout upon hearing of the broadcaster’s passing. Manager Dave Roberts said Scully “was in our living rooms for many generations. He lived a fantastic life, a legacy that will live on forever.”

Above all, Scully was a devout Catholic. His faith often found its way into the booth; riffing on the impressive performance of then-Giants pitcher Matt Cain, Scully quipped that “today, Cain is able.” He narrated a six-disc collection of the Rosary, reciting the sacred mysteries with characteristic grace. He said his faith gave him courage in the face of death.

“Being Irish, being Catholic, from the first day I can remember, I was told about death,” Scully said in 1986. “Death is a constant companion in our religion.”