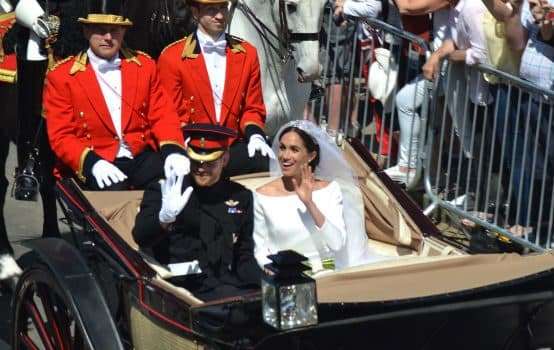 Royal weddings are all about symbolism. They are always caught between two clichéd places: the past, with all the old-fashioned pageantry and pomp, and the future, with all the hope and optimism about what might come next.

For the marriage of Prince William to Catherine Middleton in 2011, Britain’s focus was on the importance of our future king marrying a middle-class girl from the home counties. British society is still obsessed with class, so this was regarded as progress. The romance of Kate and Wills—we always use the diminutives to suggest an intimacy that isn’t real, as Americans do with Kim and Kanye, say—was the story of a well-mannered, privately educated but non-aristocratic girl marrying a prince. Monarchy makes a snob or inverse snob of everyone, and this was a bourgeois fairy tale.

Their wedding cake was made of chocolate biscuits and the couple drove off together in a blue Aston Martin with the number plate “JU5T WED.” The event was carefully choreographed to show that the royal family was shedding its stuffy sensibilities and welcoming in the daughter of an air hostess.

Prince Harry’s and Meghan Markle’s wedding last weekend was meant to be just as loaded with meaning. It was the awkward marriage of prim monarchy with global glamor. The American bride and her mother Doria Ragland stood alongside her Majesty the Queen—although it was noticeable how alone they both seemed. The gospel choir’s rendition of “Stand by Me” added a bit of transatlantic groove. Bishop Michael Curry’s sermon made stiff upper lips quiver. Is that really how they do it over in the U.S.? As one friend put it to me, “we used to go round the world extolling the message of Christianity with plenty of zeal. Now black Americans come here and do the same.” The reverse missionary, if you will. Curry’s sermon was entertaining because it seemed so unfamiliar. It was a long way from the quiet Anglican mumbling we are used to.

This was a royal wedding polished up for the Instagram generation. Britain’s new American princess was doing things differently and we were all meant to be delighted. The dignitaries were out; the celebrities were in. Only one former prime minister made the cut. Fair enough. Britain is fed up with politics because the pressure of Brexit weighs heavily right now.

The week before the wedding, the UN had sent their envoy Tendayi Achiume to investigate whether Britain was as racist as some earlier reports had made out. Yes, we were, she told us—which sent everyone into a panic. But Meghan, many hoped, could soothe our troubles, with her movie-star looks, mixed-race heritage, and messy family life.

I’ve said before that we are, in Meghan and Harry, witnessing the birth of “woke monarchism.” By marrying Meghan, Harry has finally put his Nazi party costume past behind him. The older royals might not like the modern vibes, but the PR men who surround the palace saw the opportunities. Meghan and Harry would put on a big fat woke wedding and we could all feel a bit better because of it. Even the Guardian, normally a bastion of republican sentiment, was won over.

But isn’t it strange that we needed a royal wedding to prove to ourselves—and the rest of the world—that we aren’t a bunch of loopy racists? Quite a lot of those supposed racists—the ones who voted to leave the European Union—were all thrilled about Meghan’s arrival.

The question now is: what comes next? Meghan—the Duchess of Sussex—is a senior member of the monarchy. She will have duties to perform in support of the Queen. When the Queen dies, her duties will be in support of King Charles—after that, King William, her brother-in-law. She may like to be center-stage but that is not how it works. Is she prepared for this? I suspect not. She already seems intent on upstaging her sister-in-law, the future Queen.

Britain’s constitutional monarchy means that the royal family shares power with the government, but they traditionally leave politics to the elected politicians. The royals are meant to be aloof, like the Queen has always been. But Meghan has other plans. Much like Michael Curry, she wants to preach to the world. The Duchess of Sussex’s official royal website details her pride at being “a woman and a feminist.” She is clearly not going to put her politics—and feminism is a political movement—to one side. It will be at the forefront of everything she does. So her public life will be a political one. We will just have to wait and see how tolerant the British are prepared to be of our new woke royals.

Lara Prendergast is assistant editor for The Spectator.